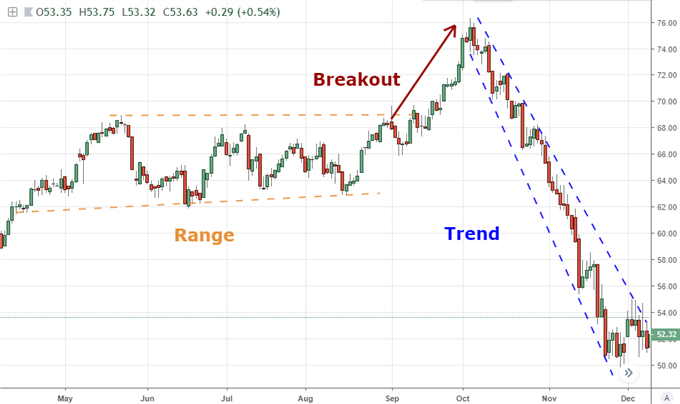 See how retail traders are positioning in EURUSD, the S&P 500 and US Crude Oil along with the FX majors, indices, gold and oil intraday using the DailyFX speculative positioning data on the sentiment page.

The Three Market Types and the Exception to the Rule

There are three general types of market we find in the financial system: range, trend and breakout. Depending on the time frame chart that we refer to, it is likely that we can find all three on a single asset readily. However, sticking to a medium-term chart such as the daily time frame, significant and lasting changes between these phases will occur infrequently. It is in the consistency of these various states that we can more readily adapt our trading such that strategy can better fit conditions to improve our overall performance. That said, the advantage will never really be realized if we don't take the time to identify what state we currently reside in - and which course we are likely to follow into the near future. It would make sense intuitively that if you position for a range just as the market is transitioning to a breakout, it is trade doomed to fail. Yet, sometimes the states can blur and applying a strategy contrary to the underlying nature of the markets is not so obvious. This is why it is important to invest time analyzing the backdrop before executing a trade prompted by an alluring but singular environmental feature: like a technical pattern.

If we were looking for examples for each of the three market states, there seems to be a considerable percentage of the trader rank that believes there are distinct conditions for the S&P 500, crude oil and US Dollar. First, the US equity index which has rallied over 17 percent from its low set just before Christmas on December 24th. There has been an unmistakable advance from that valley, but does it truly count as a prevailing trend? A trend would not struggle to return to record highs set in September and subsequently carry through them. However, few would likely be so bold as to project a clear run into new record territory even after the recovery thus far. Against the backdrop of so many overlapping fundamental troubles - including basic concerns over global growth - it would be a statistically improbable view. For US-based WTI crude oil, there is are a few hints of breakout conditions. The turn to the persistent three-month tumble through the end of 2018 seems to cue a break in early January. Since that shift, the market tried to fulfill an inverse head-and-shoulders 'neckline' break, but the $55 break notably lost all conviction immediately after the breach. Growth and risk trends is still a serious hitch to a bullish resolution here, but even an 'upright' head-and-shoulders could prove difficult to charge. From the Dollar, we have just called the end to an 8-day rally - the longest since November 2016. And yet, few would argue this effort fits neatly within a persistent range back to May which suits the conflict of fundamentals on an abundance of competing themes. A break is of course possible, but it is improbable. 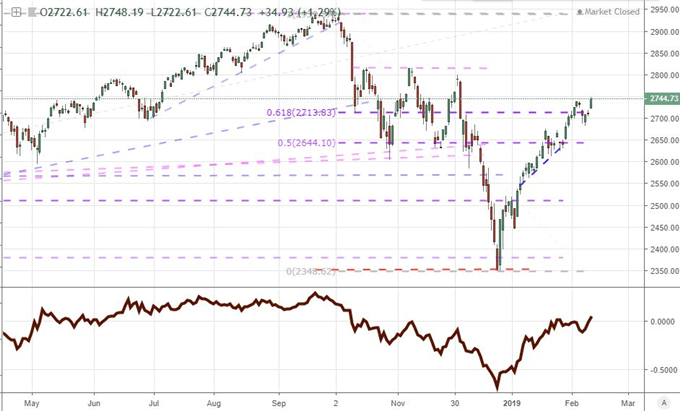 Of the three aforementioned markets, only the Dollar seems to be living up to its nature according to the perspective assigned it by the market. And, this brings up another important point: there is generally a common setting for the entire market itself. While it is possible to deviate from that environment, it is very difficult to sustain should the factors underlying the system prove engaging. To fight that overwhelming influence would require a steady stream of speculative or fundamental distraction, which is a rare occurrence. What kind of market are we currently navigating: a range. It is certainly a volatile range, but the criteria most closely fits congestion. The sanctity of explicit lines and levels does not hold against strong bouts of sudden volatility, but there is little pickup to the jolt to make even a breakout worthwhile - much less a full blown trend. How can we use this information? We should seek out the best candidate for range setups and remain deeply skeptical of tentative breakouts or trends. Specifically for the S&P 500, we should beware extending the 'buy the dip' mentality to unrealistic heights. For crude, expectations for an eventual break of the tight range it has carved the past months would be best served with reasonable objectives and stops commensurate with the circumstances. We discuss market phases, seeming candidates for all three and the prevailing conditions in today's Quick Take Video. 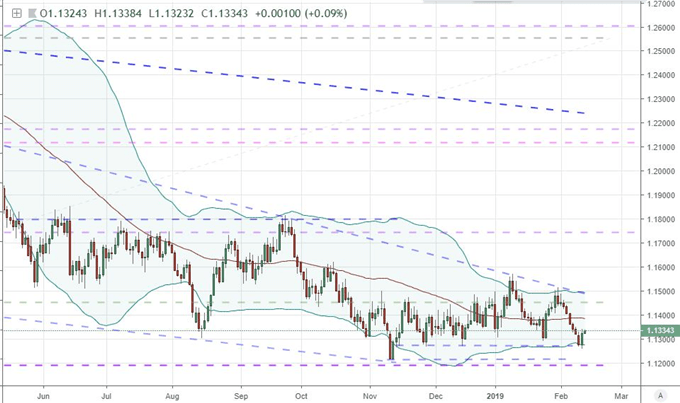