Dubious of EURUSD’s Breakout, Should I Fade It?

See how retail traders are positioning in EURUSD - along with the other FX majors, indices, gold and key cryptocurrencies - intraday using the DailyFX speculative positioning data on the sentiment page.

My Problems with a Clear EURUSD's 1.1500 Breakout

We have been following the progression of EURUSD's wind up for some time now. From reliable congestion as the Dollar struggled to sort out its primary fundamental commitments during the holidays to the transition into a breakout this week, there have been some appealing technical clues to follow its provocative moves. And yet, with a seemingly textbook break from congestion - that can even be labeled a 'neckline' on an inverse head-and-shoulders pattern - there has been no immediate follow through. As probable as the break was, so too was the pair's stall out soon after the ceiling was overtaken. As discussed earlier this week, a strong and consistent reversal is best served by a prevailing trend before the low (or high) is put into place. That is not what we find in the six months preceding this technical spark. Chop carved out numerous levels and zones that could trip up bulls who were not absolutely convinced that the Euro was going to rally and Dollar tumble. Arguably, more of a hurdle to the benchmark pair's drive is the fundamental backdrop. There is little taking the reins for the Euro - the Italy and ECB concerns have eased but are bearish if anything - and the Dollar is spoiled for fundamental drivers (trade war, shutdown, Fed forecast, risk trends, etc). Even market conditions represent a problem. I consider this a third analytical technique and it focuses on exposure, volatility, correlations, and other systemic influences. Volatility remains high across the market, but genuine trends are few. So, while the break above 1.1500 was an ideal setup, it was severely lacking for what we expect to follow. 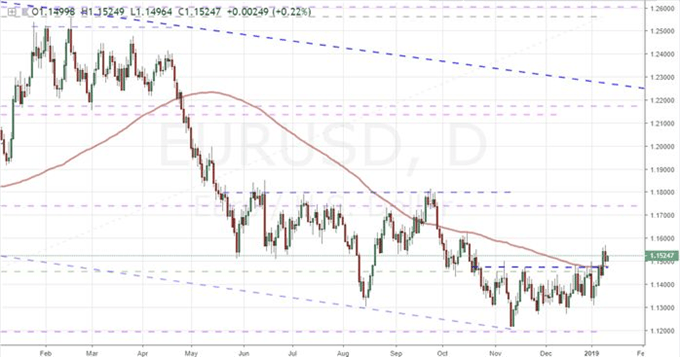 There are those out there that will translate their skeptical or contrarian views on a dramatic (or even prevailing move) and decide that it is the ideal opportunity to fade. That can certainly be the case if there are other elements for a sound setup present, but we shouldn't operate with that default mentality. Timing is crucial to successful trading. When scenarios and probabilities align, there may be statistical opportunities to jump on. However, if our only criteria is a sharp technical move (even an impressive one) we may just be devolving into chase for tops and bottoms. Yes, many believe that is a great strategy as catching one could render a fast and significant return. Yet, these idealistic trading conditions are few and far between. Most jump on scores of false moves suffering many small losses before they ever hit upon the risk/reward they were looking for. Timing is more than a single trading pattern and a gut feeling. It is the confluence of multiple criteria that you diligently evaluate and act only when a sufficient minimum of those elements coincide. Just as the break out is fraught, so too would be an effort to fade the break. How far would it reasonably run in retreat? The return to the former resistance as new support can offer some range, but certainly not enough to compensate for the risk that a breakout can suddenly come into unforeseen fundamental fuel. If anything, the fade will carry equal probability and smaller potential for movement. 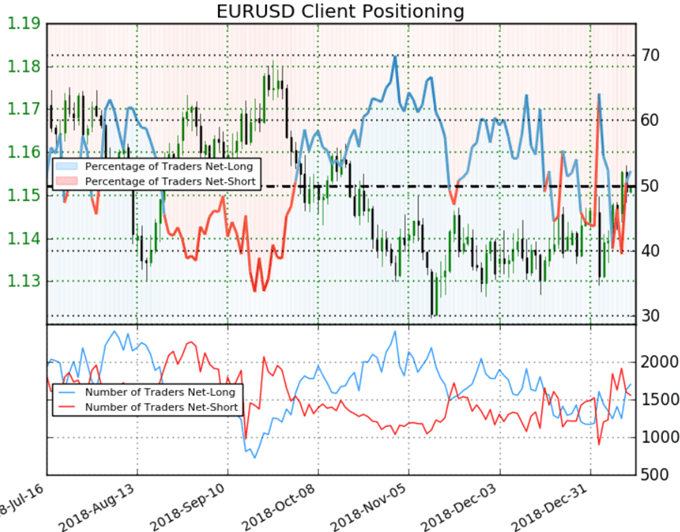 What Would Encourage Me to Act on EURUSD

Though I'm cautious of EURUSD, I'm certainly not swearing the pair off. If more of the criteria I on the lookout for were to show up, I would certainly consider it a trade candidate. What are those features? On the technical side, progress would be best served by a continued climb to reverse the past year's slide so long as the former resistance level at 1.1500 holds up. That is not all. Further from technicals, I would like to see the Dollar drop across the board and not try to force the broader market to movement - even by the world's most liquid pair. If USDJPY, AUDUSD, USDCAD and others (GBPUSD is occupied by Brexit) were to show anti-Dollar progress, that would go much further to adding weight to intent. A sudden fount of Dollar bearishness can spring forth, but it would be better served and more reliable through tangible fundamental developments. Concern over the Fed's downshift in policy, questions over the Dollar's safe haven (and carry) status, fears over the blowback from trade wars and the government shutdown can all set a bearish foundation for the currency is the markets decided it was concerned. A clear and strong fundamental motivation would be particularly important because I'm not particularly confident that the global financial system will transition from chop to clear trend anytime soon - unless spurred by absolute risk aversion which complicates the EURUSD picture again. We focus on the EURUSD's break and matching excitement to practical expectations in today's Quick Take Video. 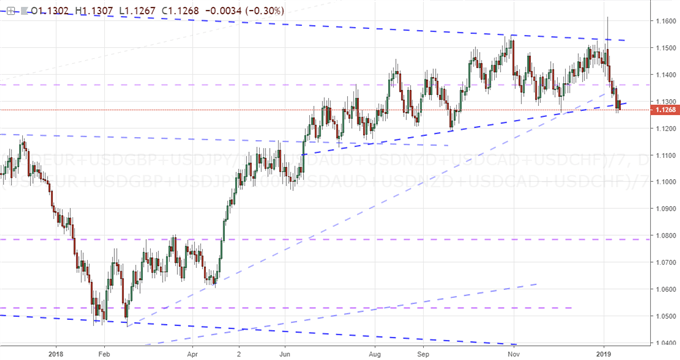