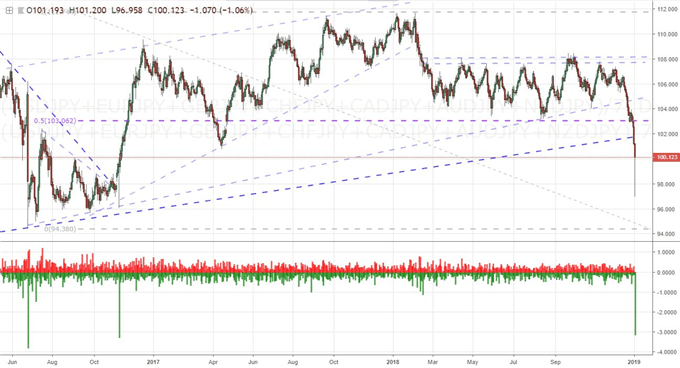 Trading in the Aftermath of a Yen Flash Crash

Did any of the DailyFX analysts focus on the Yen or Australian Dollar in their top trade selections for 2019? At least one did. Download their preferred opportunities for the year fromthe DailyFX Trading Guides page.

Yes, That Was a Flash Crash

Technically speaking, a flash crash is a rapid move in a market that covers a lot of distance in a remarkably short amount of time. The Japanese Yen's swing Thursday certainly qualified on that front. However, there is another element to this categorization in that the motivation for such a dramatic move is typically vague or even completely lacking for traditional fundamental backing. There again, the Japanese currency meets the criteria. This past session, early in Asia trading, the Yen experienced a sudden surge that drew the FX market's attention. Moves of that magnitude in the most liquid of FX currencies is extremely rare - to have it happen during the off-market liquidity between New York and Tokyo hours qualifies as a 'grey swan' - it is a possibility but considered highly improbable. Some would argue that the drop from the Yen (the largest since June 2016 on an equally-weighted basis) was rooted in a catalyst as the downgraded revenue guidance from Apple owing to trade wars fallout hit risk trends via carry trade and the Asia region in general. Yet as much as there was a spark and environment to facilitate movement, the intensity was far beyond what we would reasonably expect.

What is further interesting in the past session's oscillations is the recognition that the Japanese currency was not the only market in motion. In fact, certain emerging market currencies, the Kiwi Dollar and even the Pound exhibited a remarkable swing. Yet, it was the Australian Dollar that deserves the most credit as an equally-weighted index shows the AUD put in for the biggest intraday bullish reversal from lows (signaled by a lower wick) on my records. Combine the Australian and Japanese currencies in AUDJPY and the chart readily tells the story. As it happens, such extreme volatility draws an inordinate amount of trader interest. Rather than 'risk', investors interpret from such extreme movement pure opportunity. That is presumptuous and ultimately poor risk/reward balance. We have seen qualified flash crashes in the FX market from the Pound in October 2016 and from the Yen at various times over the past few decades, and from these instances there is little consistency on what we can expect. There is little systemic motivation for the abrupt change in tempo and bearing which naturally starves the development of reliable trends. Temporary price dislocation exacerbated by liquidity does not establish moves over many days or weeks - much less longer. 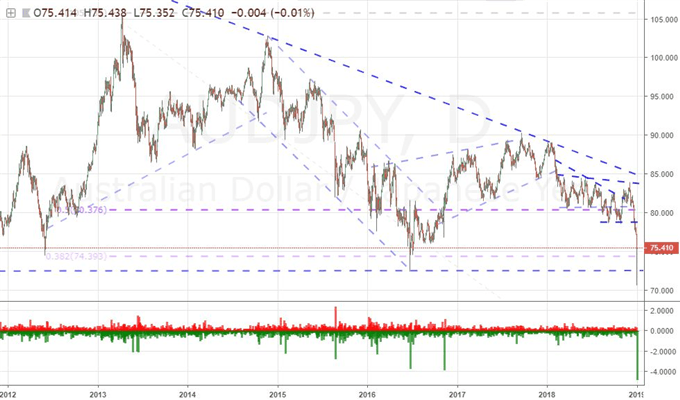 How to Trade After Extreme Volatility

If we did not sort the market conditions and fundamentals participant to the technical volatility, traders may readily take a surface level evaluation of flash crashes and make assumptions upon which trades are unreliably built. Back in 2016, the Sterling's own flash crash proved the end gap for a post-Brexit tumble that set a three-decade low. The reversal wasn't dramatic beyond the first day, but the turn was reliable. Then again, there are examples in history where sudden movement spelled the technical break to extended trends. To attribute the Yen's move as blow off top (a panic low on crosses), we would need to see a sizable backdrop build behind risk appetite to offset the connection carry trade has to traditional speculative assets. Alternatively, as a catalyst intent on follow through, there is little excess to Yen crosses like there may be on US equities. Trading such extreme moves should be viewed more practically than default contrarian or committing to the amplified charge. A normalization of volatility is highly likely. Direction still relies on what fundamental conviction the masses can register while technicals are unreliable until more significant boundaries are developed. Would I trade the Yen, Aussie or other extreme movers? We discuss that in today's Quick Take Video. 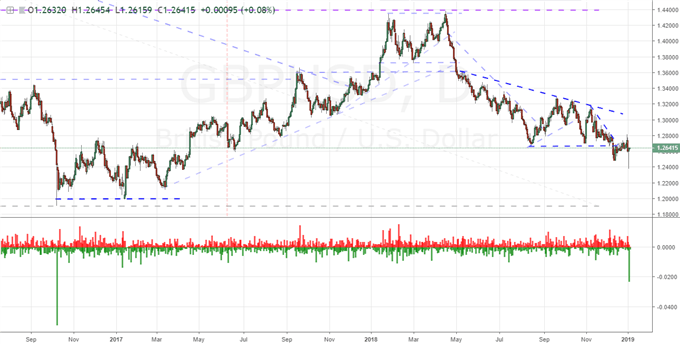