The Euro is One of the Most At-Risk Majors

It is not difficult to spot fundamental risks across the majors nowadays. Trade wars backlash, Brexit negotiations falling apart and an uneven reflection of risk in FX trading are all themes that have added weight to the majors. Yet, if we are looking for a combination of volume in fundamental threats and a tangible underappreciation of the threats lurking in the markets, the Euro is arguably one of the riskiest majors to attach any long-term bullish interest. I measure this risk in a number of ways, but simple tally of market-wide risks can certainly suffice. Leaving aside lasting issues like slower growth, financial warnings by the ECB and the two-speed Europe that still finds some members struggling to recover from the Eurozone sovereign debt crisis (we will likely return here after the market's dispassionate gaze turns back to the region's troubles); cohesion for the Euro-region is facing some of its greatest pressure in a decade. Italy's budget drive to bolster spending substantially have brought threatens of economic sanction against the EU and EZ member. The lowered proposal for spending of 2.4 percent of GDP to suggestions of 2.0 or 1.9 percent (by Tria) do little to close the very wide gap with what the Union thinks is viable. Adding a new front to this situation is French President Macron's decision to reverse course on austerity in an effort to quell riots and ramp up growth. Now we are talking about two of the largest EU members threatening to ignore budget restrictions meant to stabilize the region's financial health, and the smaller countries that have stuck to their tighter belt policies will grow understandably indignant. There are few greater threats to the Euro than questions over its existence (at least in its current 19-member and 11 trillion euro economy form). 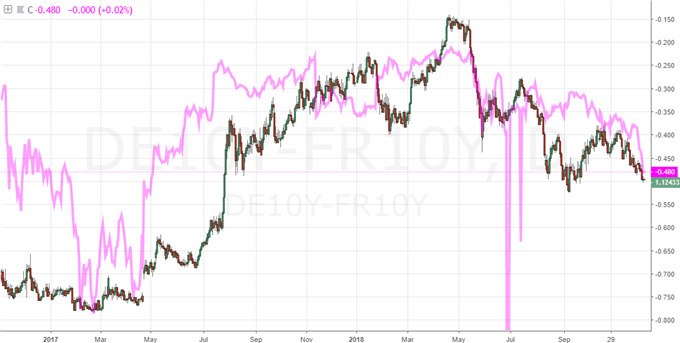 Why Has the Euro Held Onto 2017 Gains as Concerns Multiply?

Given the slow build in local issues for the Euro, how has it been able to maintain its buoyancy? Sure, the currency has eased over the past few months, but it is still holding onto much of its gains forged through 2017. This is the combination of hold over speculative premium and a useful distraction from troubled counterparts. Take a look at some of the other majors in the FX market, and we find perhaps why the Euro held steady for so long. While the Euro-zone will not miss out on economic and financial fallout should the Brexit negotiations conclude poorly, but they are more explicit a risk to the British Pound. Meanwhile, the Dollar is coming under pressure for the US's stance at the middle of global trade wars (and all the blow back that comes with that) and growing speculation that the Federal Reserve is planning to throttle back on monetary policy moving forward. If neither the Sterling nor Dollar are holding onto their funds particularly well, where does capital move instead? There are very few options to stand in the place of these currencies, but the Euro is certainly the most practiced offset. Yet, what happens when the Euro is under pressure itself - and when its own issues are perhaps more intense than say the Dollar's, the currency will stumble. Thus far, however, the Euro has held on to much of its 2017 gains. Through that year, the shared currency charged higher despite the ECB's lack of commitment to a normalization path and an otherwise tame fundamental appeal relative to global counterparts. Undermine the hope of rate hikes and increase the risk of European political civility continuing to downgrade, and this will be a currency for the chopping block. That calls to attention the start of the EUCO meeting and the ECB rate decision on Thursday.

EURCHF as a Local Haven and Sentiment Measure

There is a different quality to the market options should risk aversion pick up globally versus a more concentrated trouble arising within Europe itself. In the event that the speculative wave starts to crash globally first, there Euro will nevertheless find itself a currency at explicit risk considering its dependency on a general status quo. In fact, I consider this shared currency one of the most at-risk majors / regions should sentiment sour globally. Considering the most intense scenario first, full-tilt risk aversion that calls to attention the lack of options for the world's largest central banks to fight the financial fire; a shift of capital out of the Euro would find more reliable destination in a hedge to traditional fiat like Gold. This is a commodity whose appeal is very specific, but its position unquestionable when revert to such terms (as we saw between 2008 and 2011 with the rise of QE). If there is an intense global risk aversion whereby liquidity is of primary interest but financial stability is not coming unglued, EURUSD will be a better outlet. The Greenback is the only major that is more liquid than the Euro, and it has considerable buffer in monetary policy and fiscal options give it the ability to hold back a tide that would swamp the shared currency. Yet, if the troubles that start to really gain traction are more directly isolated to Europe, a more localized haven would be sought. There is a long history of capital flight from the region seeking harbor in the stability of the Swiss banking system. And, despite the SNB's efforts to dissuade investors looking for shelter through negative rates and the governments impression on the sanctity of the country's tax shelter status, a strong wave of European deleveraging will wind capital back into the Franc. Whether you use this as a trading vehicle or mere barometer, it is worth watching EURCHF and plotting strategy around the scenarios we find in its progress. We focus on alternatives to the Euro's risks in today's Quick Take video.