Which Major Faces the Most Risk This Week: Dollar, Euro or Pound

Identifying the Worst in a Range of Bad Performers

When it comes to the FX market, everything truly is relative. Two currencies are pit against each other to discern value, with one strengthening and the other weakening as progress is made. As trends arise, there is often little question as to the nuance between the two components. However, the intensity for each currency's strength or weakness should be evaluated more closely to establish better overall trading options. The ideal is to set the most bearish candidate in a range of options against the most bullish. While far from guaranteeing a profitable opportunity (timing, fundamental circumstance and more are additional considerations), it goes a long way towards improving the scenarios. When put to task, most traders will look to identify the most bullish candidates in a grouping - due to a cognitive bias towards the assumption of rising value. Yet, seeking out the most bearish currencies is sometimes more fruitful, as when there is a host of negative systemic risk in the global markets like trade wars, toppled growth forecasts, faltering monetary policy intent and more localized risks. While there is always the possibility of a positive scenario for a market, sometimes the bearish options are more numerous and higher probability. That is the case for the Dollar, Euro and Pound at the moment. 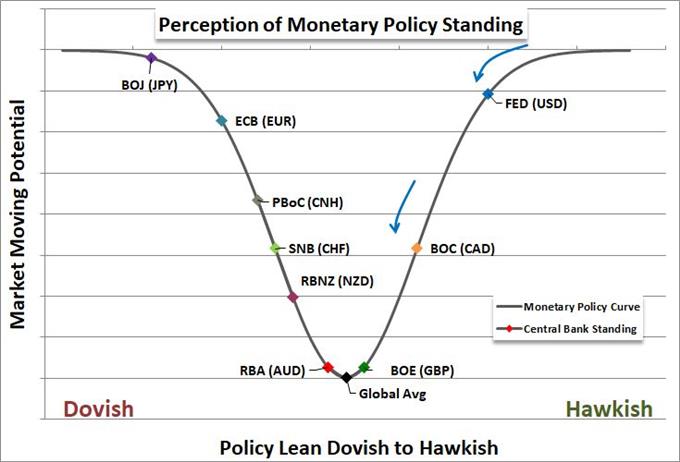 The Dollar and Pound are Serious Contenders for Trouble

With a restriction to just the upcoming week, we can start to compare the trio. Starting with the least potent and working our way up, the Dollar is first in the list. Technically speaking, the currency is wound up. It has worked its ways into a tighter range over the past month and a break is inevitable. However, triggering this move doesn't immediately mean that follow through will be readily forthcoming. In fact, for the Greenback just for the coming week, there will be something acting actively against its ability to establish a productive trend. Over a longer period of time, the currency's absolute safe haven value and its position in the center of the most threatening trade war in modern times can provide the basis for a serious move. That said, the Federal Reserve's monetary policy plans on Wednesday December the 19th can leverage intense volatility and may very well overcome liquidity restrictions to establish a trend. Of course, given the event is a week forward, anticipation can keep the Dollar from running. In direct contrast to the USD's circumstances, the Pound faces very explicit event risk over the coming week. Tuesday's Parliamentary vote on Prime Minister Theresa May's Brexit proposal represents a critical fork for the Sterling's fundamental bearings. Yet, there is no truly 'good' outcome in market terms. Approval is the most soothing scenario but it is highly unlikely. That said, as uncertain as the outlook seems; the market has discount such outcomes and will wait for more details as to the path to the scenarios. 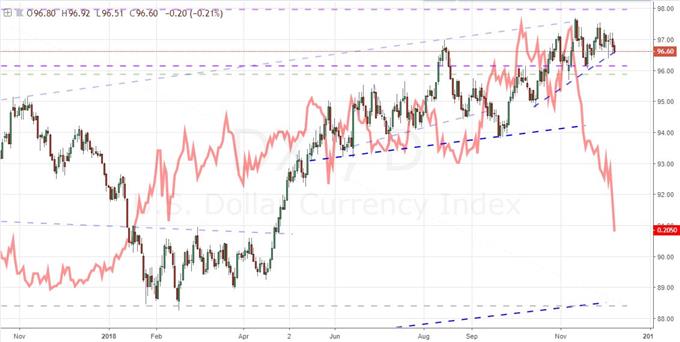 Why the Euro Faces More Discrete Trouble This Week

Of the three currencies, the Euro faces some of the most explicit scenarios for productive bearish trend. There are a host of fundamental events and themes that threaten to motivate the currency. That said, anticipation for higher profile listings will undermine the influence of event risk such as the Euro-area investor sentiment surveys, the Eurozone PMIs and other otherwise economically important data. A critical but convoluted issue is Italy's budget standoff with the European Union. The country's Prime Minister and Deputy Prime Minister are due to speak in the first half of the week preceding the European Council’s summit where budget will be one of the key talking points. As destabilizing as this theme has the potential to be, this is not a situation that is being forced to a head. Similar to Greece in many ways, this conflict can be maintained until the financial market forces action. It is possible a bearing is found this week (bearish or bullish), but the chances are far higher for a detrimental outcome. As the markets grow increasingly detached and complacent on an existential risk with its member, a more definitive event is set to follow Thursday. The European Central Bank (ECB) rate decision is still facing a market harboring anticipation of an inevitable hawkish shift some time late next year. Given the downgrade in intent for the genuinely hawkish rank (Fed, Bank of Canada, Bank of England) it is far more likely the European authority moves its intent further into the future. And it will grow increasingly difficult to ignore the premium the currency has held onto. We evaluate which of the three top majors - Dollar, Euro and Pound - are most leveraged bearish candidates in this weekend Strategy Video.