See how retail traders are positioning in NZDUSD, the FX majors, indices, gold and oil intraday using the DailyFX speculative positioning data on the sentiment page.

Fundamentals Can be More Burden Than Boon

To many traders who are new to the markets, volatility is seen as an asset that can be leveraged for faster gains. Yet, the experienced market participant knows that an increase in activity is equivalent to a jump in uncertainty and an accelerant to losses as readily as gains. There is a similar misconception when it comes to incorporating fundamentals into trading decisions and strategies. Inherently seeking a jolt of volatility, many novice traders hone in on high-level scheduled event risk and look to place a trade immediately after a surprise print in a fast moving market - or even more fraught, preempt the outcome of the data with exposure and run the risk of low probability guessing for economic events. Looking to follow underlying themes is slightly more reliable a strategy. A build in popularity and consistency in the run can improve probabilities. All told though, pursuing volatility in technical or fundamental form is an endeavor that lowers probability. Take for example the Australian Dollar which was doing remarkably well - especially after the announcement of the 90-day pause on the US-China trade war tariffs escalation. A trend was in place until the RBA reinforced its reticence and a disappointing 3Q GDP report led a string of disappointing updates. The Dollar has started to take on water with risks rising sharply on a downgraded rate forecasts - and anticipation of the NFPs Friday will help little. Fundamental obsession in anticipation can wreak havoc - as it has for British Pound which eagerly awaits Parliament's Brexit vote Tuesday. Avoiding such complications is in a trader's best interest.

The Curious Case of the New Zealand Dollar

Among the majors, the New Zealand Dollar is one of the least fundamentally-charged currencies to be found. Looking out over the economic docket, there is very little scheduled over the coming week and nothing that would readily be highlighted as a high probability market mover. That is the first appeal, the lowered volatility threat. However, the appeal runs deeper than just an absence of known economic updates. Where the Dollar has Fed rate forecasts, the Pound is hanging on a critical Brexit update and the Canadian Dollar has suffered for a sudden downshift in Bank of Canada rate forecasts; the Kiwi has seemingly divorced itself from its traditional drivers. Through sometimes violent swings in risk appetite this past month, the New Zealand currency has climbed consistently. A global downturn in monetary policy forecasts seems to have left this currency, which is included in the majors due to its high yield, virtually unperturbed. The ebb and flow in the US-China trade war hasn't spurred external risk and local interests have grown more sanguine over real estate conditions. None of these features is a proactive driver behind a Kiwi bid, but it allows for rebound from a discounted position. That lasts so long as the conditions are what the market is seeking out. A surprise shift in interest and responsiveness is more likely to occur should conditions (risk, monetary policy, local economic health) were to suddenly falter. A sustained bullish run at this same pace is less probable and starts to run afoul of the lacking fundamental support to an already incredible climb. 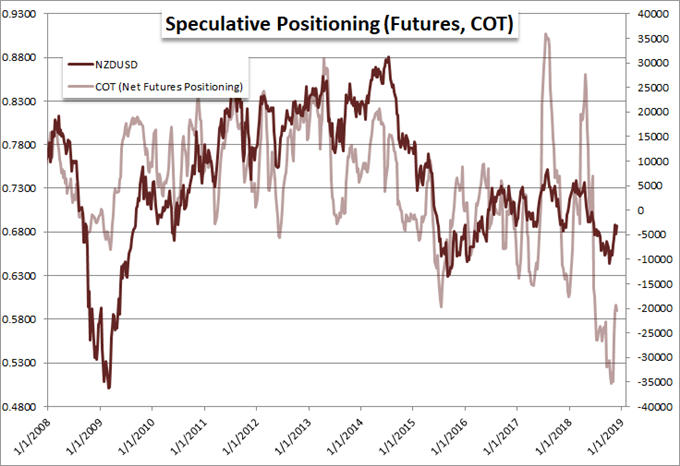 It is certainly possible for the Kiwi Dollar to continue its climb, but the lack of fundamental milestones and the technical stretch dampens probabilities. A reversal call is not particularly reliable until critical technical progress is made and/or fundamental support can come into play. However. speculative positioning may prove the tipping point. The record net short speculative positioning behind futures exposure this past month has seen significant rebalance. Is it enough to establish a balance for which the currency can evaluate its next move with greater deference to the collective backdrop? In general, it is important to avoid pairings whereby the counter currency can disrupt or 'overpower' the Kiwi. Examples of such crosses include: NZDUSD which is tied into trade wars, NZDJPY wrapped up in risk trends and GBPNZD which is pure Brexit fodder. More attractive for their own tame contribution are the AUDNZD and EURNZD. The Aussie Dollar has dropped significantly on data, but it has changed little of the long-standing trend. The euro suffers Italy's threats and the ECB rate decision, but complacency has taken over both. My favorite pair, however, is NZDCAD where the Loonie's steady downgrade has front run actual fundamentals. It is critical to await technical and fundamental cues to signal a true turn of fortune, but I'm watching closely. 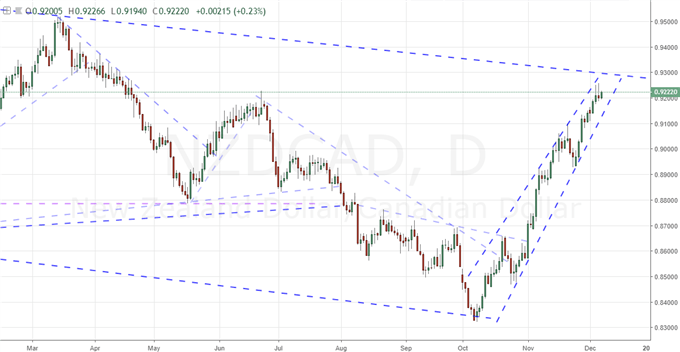