What Would Signal a Panic-Low for Crude Oil?

Crude oil has suffered far more than an overdue correction. The commodity seems to add to its considerable list of unflattering milestones on a daily basis. This past session, the US-standard grade WTI contract suffered an exceptional 6.1 percent plunge just this past session. That was the biggest single-day loss for the market since February 2016. Further, this additional slide would notch a 12th consecutive daily loss for an even more remarkable record tumble. In terms of scale, in six weeks’ time the benchmark commodity has lost nearly 29 percent from its peak high in early October. Any way we cut it, the crude market is succumbing to remarkable bearish pressure. The direction itself is remarkable given the conflict between headlines putting OPEC leaders' plans to control price by cutting output against US President Trump's remarks aimed at keeping the slide intact. It may be convenient to suggest the weakness is associated to general risk trends for which crude is simply catching up, but that would be disingenuous given the general aloofness in sentiment until now. Far more exceptional is the tempo the market has maintained given the general unevenness of speculative markets the world over. Is it reasonable to assume that this key asset has simply escaped the restrictions of the broader capital markets or that it is perhaps leading its counterparts to an eventual, more productive bear market? Anything is possible, but that would qualify as a 'tail wagging the dog' influence. 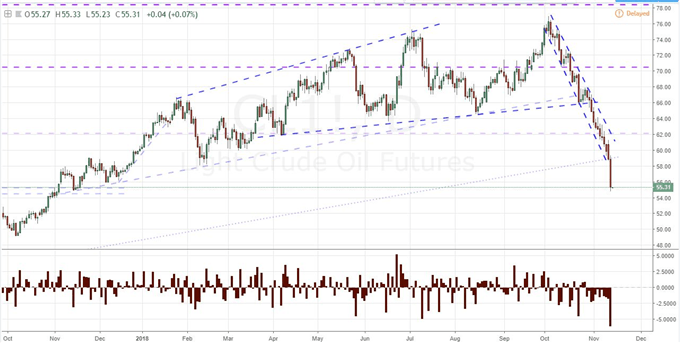 Chart of US Crude Oil and Consecutive Day Moves (Daily) 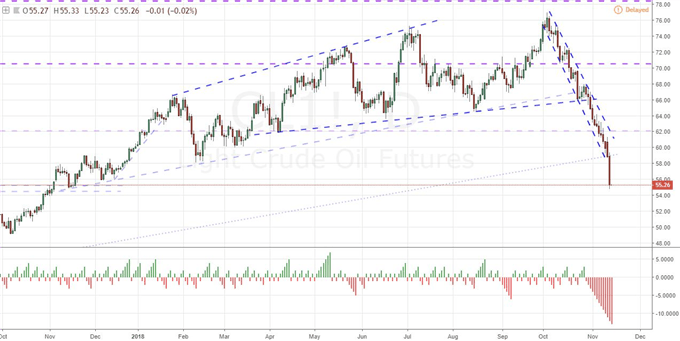 The Concept of Blow Off Tops and Panic Lows

The sheer intensity of crude's tumble to this point should raise the attention of speculators far and wide. With statistical records in the consecutive daily losses and an extreme move with deviation from averages, the potential for a speculative correction is naturally high. Yet, the abrupt acceleration through this past session adds even greater pressure for rebalance and speculation will grow in kind. There is a certain measure of assumed saturation for an established trend that arises from such patterns. An established trend of remarkable consistency that sees a rush of interest to hop on the band wagon can often prove a significant reversal. These are the general constructs of a 'blow off top' reversal. In such a scenario, an established bull trend sees a sudden escalation in bids to warrant an exceptional short-term leg of the rally as the final thrust before a comparatively sharp reversal. What's more, the over-indulgence is not a directional phenomenon. The equivalent for a bearish trend that eventually finds its turn would be a 'panic low'. Whether the prevailing trend is bullish or bearish, the criteria are the same. The fundamental motivation for the move becomes far less important than the need to participate at all cost for fear of missing out (FOMO). Is what crude is going through just such an over shoot that will naturally snap back? That depends on where we look and how we trade the market. 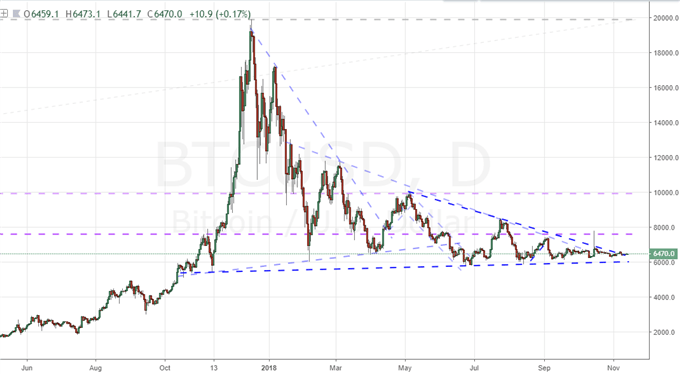 How to Approach Oil and Tamp Down Lurid Speculation

If you intend to trade crude oil or an asset/perspective that is connected to the benchmark energy product, it is important to establish where your conviction would arise. On a technical basis, there is some precedence in the $55 level more as resistance in previous years, but the figure stands as something of a pivot. That said, there is little chance that this passive marker would take up the fight against momentum. On a fundamental basis, the circumstances aren't much better. Reports of production ramping up with a significant contribution from non-OPEC producers adds to the general discomfort amongst speculators that Trump's constant demands for OPEC to lower prices further are worth considering, but there is little in the way of reliable trade conditions to review. A supply glut and IMF growth downgrade are not exactly novel headlines, even if they add to the gravitas of the situation. If we are looking to monitor oil for trade purposes, it is important to monitor momentum as a crucial technical aspect to the market. In addition to de-emphasizing fundamentals and tracing speculative momentum, it is crucial to keep tabs on speculative exposure. There is the weekly net futures speculative positioning figures from the COT which has seen a wave of bullish deleveraging over the past six months from a record high - a peak that was a remarkable disparity to price's historical context. More fucntional is the short-term read from the DailyFX sentiment data from retail traders which has clearly fought the rise. For those that intend to trade this overwhelming move and tenent of volatility, caution is the primary virtue. Establish a requirement for conviction whether it be a new high, a higher close, technical milestones, flip in timely averages or something else. Establish a practical signal. We focuson crude oil in today's Quick Take video. 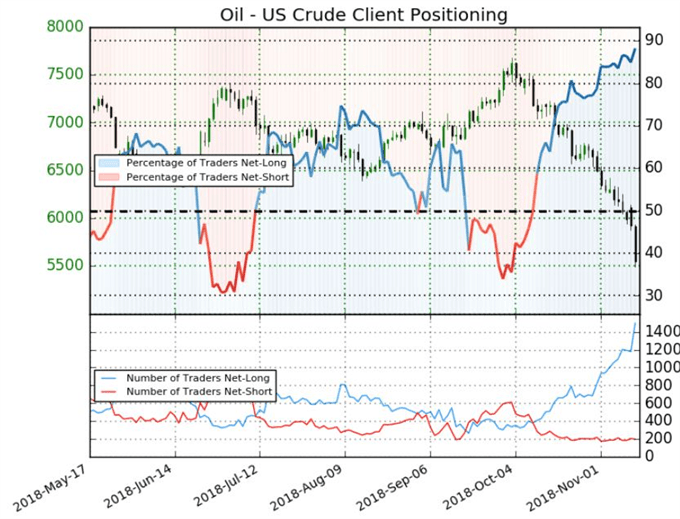