US, China, Japan - Who Most Wants Their Currency to Drop?

Why Would Countries Want a Cheap Currency and a Brazen History

There is an economic advantage to draw from a cheap currency. The country who wins that lottery will see demand for its exports increase as the cost of their goods deflates owing to the sliding pricing instrument. It is a dubious way to prompt value, but not an uncommon one. That is the textbook assessment of the situation, but the reality is far more complicated. Is there really an advantage to be found when protectionism is a driving force around the world and/or when the economic winds are blowing against the heady appetite for consumption? In reality, the concept of the trade advantage has warped severely over the past year. Questions over the effectiveness of policy to affect such a significant distortion have grown into a din of skepticism. When everyone is pursuing the 'socially acceptable' strategy of leveraging stimulus to facilitate a currency depreciation, it tends to work for no one. Furthermore, the state of global diplomacy is such that efforts to earn an advantage by jostling trade relationships earns retaliation for a systemic drop in global trade rather than a targeted opportunity for a specific instigator. Just as the promise of another infusion of stimulus no longer carries a connotation of risk appetite, the fringe benefits of devaluing a currency no longer prompt economic confidence. Instead, the aim of such intent and actions no carries the sense of desperation and promotion of global instability. So, which major currencies feature the strongest charge to devalue under the auspices of this speculative shift?

US of Major Currencies from Bank of International Settlements Triennial Update 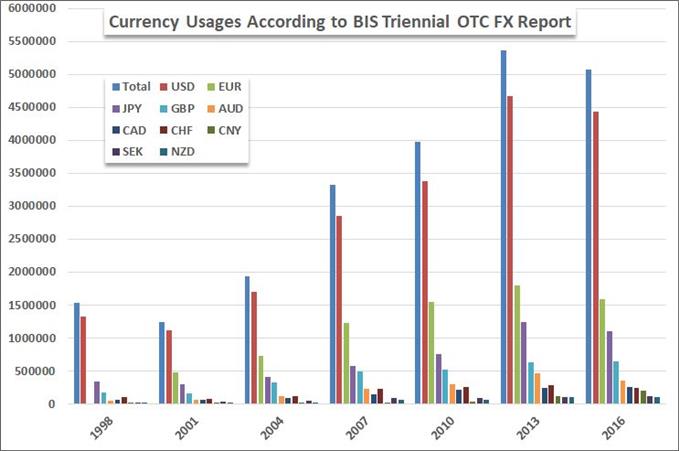 Yes, the Desire for a Weaker Dollar is Stronger Than All Others

Deliberately eschewing the consideration of how policy authorities rank according to their available tools to force such change, I evaluate purely on desire and stated intent. At the top of my list for those majors where devaluation is a dominant feature of the FX landscape is the pressure behind the US Dollar. The DXY Index stands at 97 resistance (a 15-month high) while EURUSD is closing in on 1.1300. Technical pressure is building, and US President Donald Trump does not appreciate the conflict. The President's policies are aimed at exacting economic pressure on trade partners to afford traction for the United States. This effort has had uneven results, but the long-term implications of the world looking to circumvent dealing in the US currency and its assets are hard to miss. A monkey wrench in the administration's efforts, applying tariffs on trade counterparts would naturally weigh the target country's economic health and global investment appeal. The foreign currency would naturally drop and the Dollar in turn gains. That leaves US goods more expensive and a fundamental flaw in the protectionist strategy. If authorities were to pursue a currency policy alongside the international trade efforts, a more effective effort may be mounted in the short-term (building pressure that eventually blows long-term). Thus far, Trump has restrained his efforts to voicing criticism for the Fed's tightenign cycle and openly ruminating on replacing Chairman Jerome Powell. Trump has inspired his chief economic adviror and Treasury Secretary to back off of the 'strong Dollar' policy so long espoused by leaders, but such a strategy has yet to bear obvious fruit. The President does not have legal authority over the central bank and officials have voiced little interest in taking his guidance. Trump has little outlet to change rates, but he can sign executive orders that nputt global trade and the viability of the Dollar. Beware. 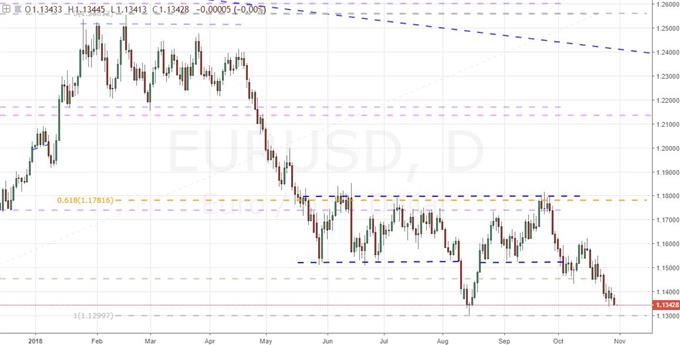 Where Do China, Switzerland, Europe and Japan Fall in the Rankings?

Moving down the list of most motivated to devalue the local currency after the Dollar, we have the Swiss Franc. There is little doubting their intention. The Swiss National Bank (SNB) has stated clearly that it believes its currency is *still* too expensive - above and beyond underlying value - and they will continue to puruse policies (like an attempt at forward guidance) to effect a change. It may never gome. Meanwhile, the Euro is an soundboard for monetary policy applied in the pursue of a financial market impression. The Euro is still holding onto considerable gains won against the Dollar and other majors through the past year, yet that doesn't fully distract attention away from the systemic risks that hover over the markets like specters. Back in 2014, the ECB made clear overtures to connect monetary policy tightening to generate an exchange rate response. They were exceptionally effective on, but the options are materially thinner now. With Italy presenting a systemic threat to the Euro-rea, a drift higher in the Euro will likely follow - but not on the intent we have seen through the past few years. If the ECB were to pluck another level of consequence, they would struggle to facilitate a strong trend. Another currency often wrapped in unfair trading practices is trade wars. Typically, the expectation is that the Chinese Yuan is one of the top currencies when it comes to intent to devaluate. That said, USDCNH has proven the Chinese policy authority (PBOC) has little interesting in pushing the exchange rate towards the 7.000 mark. As for the other mayors, the Japanese Yen deserves a notable mention. Devaluing the Yen was a primary target of the 'three arrows' of Abenomics. There is likely an appetite to see the currency drop without effective intervention, but don't rely on the market's intent and mood. We discuss this important value on key markets in today's Quick Take Video. 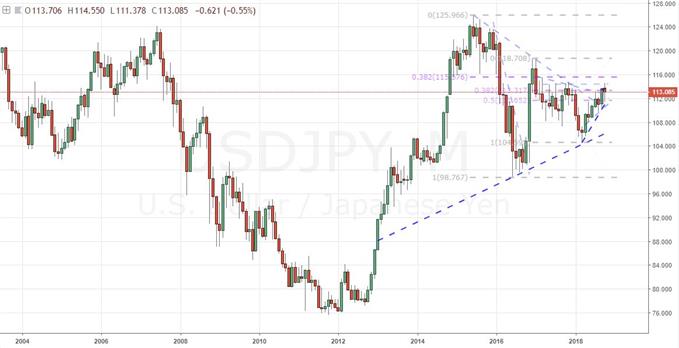