What is More Important for the Dow: Netflix Earnings or Brexit?

Do you have market, trading or strategy questions? Ask them at my weekly Trading Q&A webinars with Senior Strategists Ilya Spivak and Christopher Vecchio CFA. Or, see what other live events and regular trading discussions are scheduled on the DailyFX Webinar Calendar.

Whether or Not Fundamental Developments Move the Market

No fundamental axioms are universally reliable. For example, the US Dollar is considered an ultimate safe haven, but the currency has benefit little from the recent troubles in capital markets. With the same currency, interest rate expectations for the Fed have continued to outpace global counterparts while US yields themselves have extended their premium over the same peers. Markets determine what is important when it comes to rising and lowering the value of assets. Furthermore, there is a tendency towards innate bias that seems more common in individuals but is very much a feature of the global landscape. How often have you come across a situation where the market seems to downplay or completely overlook negative developments while leveraging the positive. Or, vice versa, a stream of favorable developments seems to go completely overlooked whereas the first sign of trouble stirs deep concern across the speculative rank. This bias is the result of speculative appetite projected through forecasting which is naturally occurring in open capital markets. Such inherent interests shift with time and circumstance, but the surrounding market environment and relationship between certain assets can signal what to watch for while separating risks from opportunities.

Monthly Chart of the Dow Index 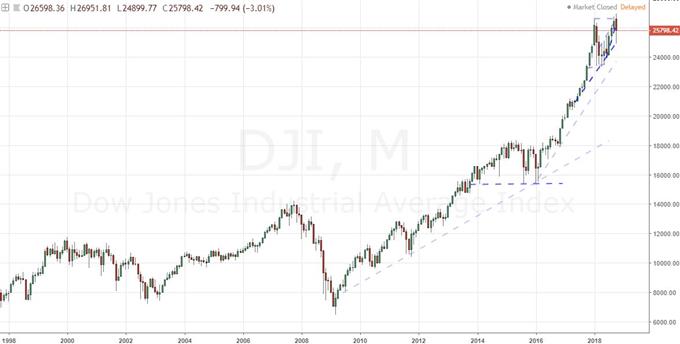 How the Dow, Netflix and Brexit Differ

This past week, we have experienced extreme whiplash in the benchmark US equity indices. Between Wednesday and Thursday of last week, the Dow, S&P 500 and Nasdaq all tumbled. The move was severe and further drew in all most other risk-leaning assets. However, the drop would level out before hitting critical mass - what could technically be signified by the round of indices holding at their respective trendline supports stretching back to the US election. Holding level long enough inevitably pulled the complacent bid back which leveraged the largest single-day rally in six months. How long will this natural reversion to speculative reach continue especially when so many other sentiment-derived markets have slid independent of the S&P 500 and crew for months and the laundry list of systemic risks grows. Trade wars, China financial stability, growing US debt, Eurozone stability, Brexit and more are raising the fundamental stakes. And, so we have the three metrics that I discuss in this video. Will the Dow take its guidelines from Netflix when liquidity returns for US trading Wednesday morning or will a systemic risk like Brexit cast its influence? These measures are chosen for their systemic differences. The Dow is a pervasive speculative benchmark that defaults to bullish as perhaps the most remarkable holdout relative to nearly every other benchmark in the global market. It would seem that Netflix shares would naturally correlate to the Dow as they are both US equity metrics, but they are also fundamentally different. The Dow is a blue-chip aggregate while NFLX shares represent the concentration of speculative interests in this asset class with US equities leading most risk assets, the tech sector pacing general equities and the FAANG components (Netflix is the 'N') at the core. Brexit on the other hand is a possible catalyst, but one that a senior US Treasury official warned can be a global financial risk. The company reported earnings after the bell Tuesday with strong figures that charged a 17 percent rally in afterhours trade while the general bullish lean in sentiment was notably restrained, as has been standard fare recently. 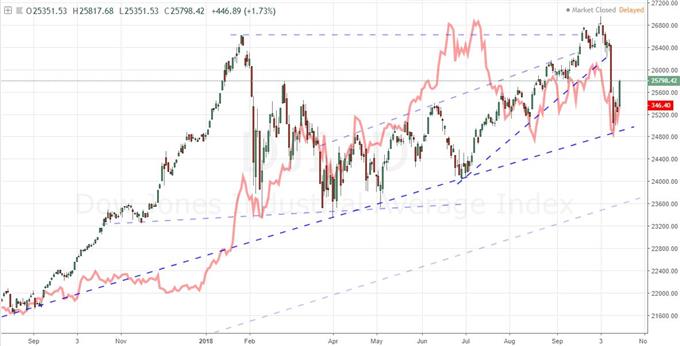 What Correlations Between These Baselines Could Signal

Given the differences between the Dow, Netflix and Brexit, we can start to appreciate how their alignment can signal something more systemic in the focus and bias of the underlying market itself. Naturally, the expectation for Wednesday trade is for the afterhours surge in Netflix shares to prompt a rally for the equity index. Given it is in the same asset class and the speculative bounce of the past session makes it easy to leverage mere continuation rather than fight restraint, it would seem the natural course. However, what would it signal if a robust showing from this market cap giant fail to whet speculative appetites when its earnings miss in the second quarter contributed so substantially to the broad stumble? From Brexit, the take away is not the event itself - although it carries significant implications for the health of the global markets and economy. Rather, the importance of such a connection would be that the deep current carrying the Dow is shifting towards more grounded fundamental concerns. The charge can be any number of themes from trade wars to the US labeling China a currency manipulator to the path of global monetary policy. Yet, Brexit is still considered ancillary to US capital market health. If it prompts market response - whether bullish or bearish - it can signal a troubling change whereby any number of systemic issues can sour the mood and garner traction for a more systemic turn. We discuss the unusual link between the Dow, Netflix and Brexit in today's Quick Take Video. 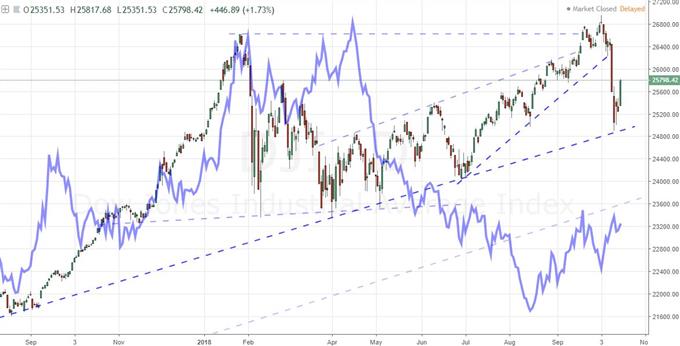