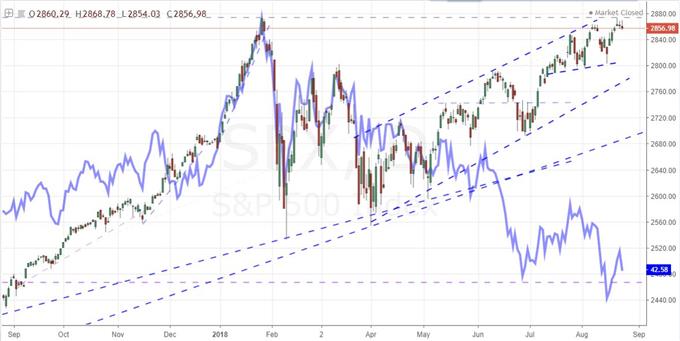 What if Fear of Trade Wars, Brexit or Rate Hikes Suddenly Vanished?

See how retail traders are positioning in the Dollar-based FX majors along with indices, gold and oil intradayusing the DailyFX speculative positioning data on the sentiment page.

It's Important to Evaluate Alternative Outcomes

I am skeptic by nature. This is not always the best view to hold in all situations in life, but it does serve my analysis and trading well. When we consider a prevailing trend, a fundamental theme, a trade scenario, etc can run or collapse; it is inevitable that we start thinking in terms of probabilities. There is no certainty in placing a trade just as there is no predicting the future. It is true that the more robust evaluation of the circumstances and contributing factors that is done, the chances of success increase. But, there is never certainty. To help reinforce this appreciation, I frequently like to consider alternative scenarios to the market's (and/or my own) primary forecast. I like to even consider the extreme antithesis to the presumed conclusion as well. That lends the practical advantage of loosely having a plan should the unexpected occur, but more often it helps to more thoroughly evaluate the more likely scenarios and to help me establish the murky tipping point where a trade should be pursued or not, held or cut.

What if Trade Wars Suddenly Vanished?

There are a range of high profile fundamental themes dictating course and pace for the markets, so we will pick three of the most prominent and consider the 'alternative' outcomes. First, trade wars. The United States has pursued tariffs against much the world when it applied the metals tariffs months ago, but the tension is clearly the greatest with China. As of yesterday, the two countries added another $16 billion of import taxes on each other’s tabs to round out $50 billion on both sides. What's more, the US Treasury is investigating adding another $200 billion in tariffs on Chinese goods with the open period for public feedback to end in early September. And, lest we forget, President Trump said he was willing to add charge to all Chinese imports amounting to more than $500 billion. Despite this escalation, however, the S&P 500 hasn't struggled at all. Therefore, if this threat eased altogether suddenly, US equities may not be the best opportunity as they are not running at a discount and are instead attuned to complacency. In contrast, the VEU global equities ex-US ETF shows clear divergence and it is even deeper for the EEM Emerging Market ETF. On the FX side, there are deep ramifications for EURUSD but the implications are more difficult to evaluate. USDCNH in contrast is very sensitive.

What if a Brexit Crash Out ('No Deal') Were Prevented?

The countdown to the official date that the UK is due to severe ties with the European Union is closing in fast. The Article 50 day was officially set to March 29, 2019; but the current picture of progress for negotiations suggests both sides could remain at odds by that time frame leading to a hostile divorce. A tumble for the British Pound over the past four months in particular reinforces the assumption that the market expects a disaster. A 'no deal' outcome would be economically painful for both the United Kingdom and the European Union, but trouble would be easier to register for the former. Given how far an equally-weighted Pound index has fallen over the past months, there is clearly a substantial discount. Therefore, if the two sides came to a compromise - it doesn't have to be an ideal situation, simply a compromise at this point - there is some recovery for the Pound that is likely. That same unexpected outcome would bode well for the EU as well, but the Euro has not shown much appreciation for its own fallout. As such, a rebound would be just as restricted. Alternatively, UK shares which have struggled relative to their US counterparts, could be prompted for a relative recovery. While this is still an unlikely course, it is materially more likely to realize this alternative outcome than trade wars suddenly coming to an end.

What is the Effort to Normalize Monetary Policy Was Halted?

Before there were trade wars and long before Brits voted to leave the Union, there was extraordinary monetary policy. The world's largest central banks following the Great Financial Crisis scrambled to implement extreme accommodation in a bid to head off a full financial collapse and an economic depression. There is good evidence to support the success of the initial effort, but further expansion of the effort through recent years strains practical belief of returns. Theoretically, if the financial system is seen as stable while expectations for growth and inflation are improving; central banks would in turn back off from QE and consider raising rates. This is what we should remember when it comes to evaluating monetary policy. It is likely that the efforts to normalize monetary policy thus far will be pressured. Over-indulgence in financial market exposure paired with lackluster growth and inflation globally points to distortions and ineffective policy. Should the global economy start to hit the skids or financial fears strike, the push to reverse course will immediately stall. Rather than see it - as we did 4 years ago - as a charge for short-term speculative appetite, the market would likely sense fear and desperation. In this troublingly likely market shift, the global stocks stand to lose the most owing to broader risk trends. Emerging markets would similarly feel serious pain. In the FX market, the Dollar has yield premium to lose and the Euro enjoyed pure ECB speculation to a strong 2017 gain. That makes EURUSD an unruly forecast. We discuss evaluating alternative outcomes for key fundamental themes in today's Quick Take Video. 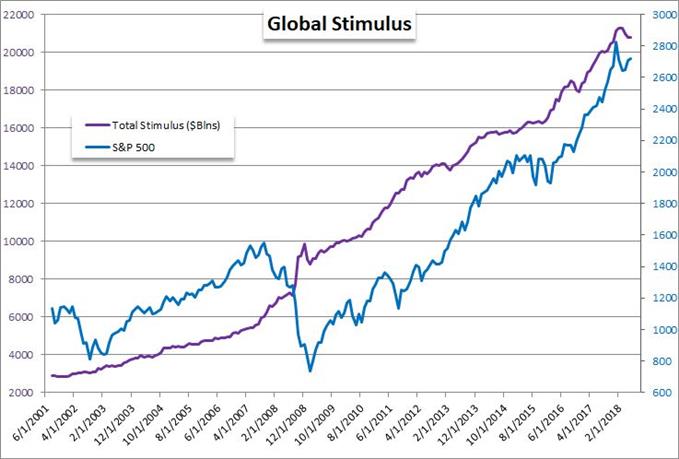