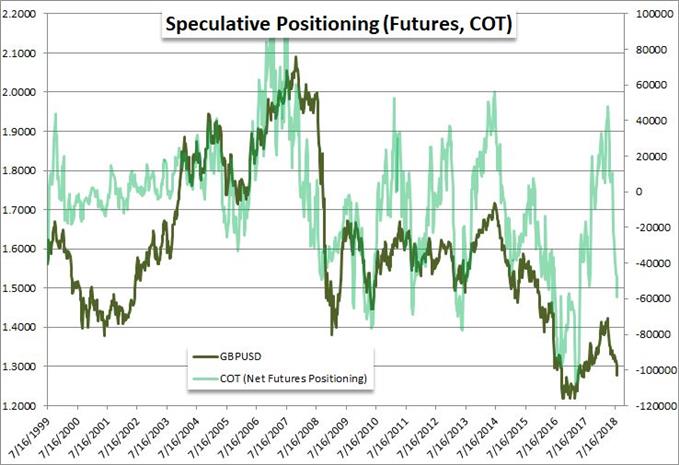 The Case, Cues and Options for a Pound Reversal

See how retail traders are positioning in GBPUSD, EURGBP, GBPJPY and other FX majors along with indices, gold and oil intradayusing the DailyFX speculative positioning data on the sentiment page.

Over the past four months, GBPUSD has dropped nearly 12 percent from its post-Brexit highs near 1.4400. Some of that drive can reasonably be attributed to the US Dollar's recovery. However, when we look to an equally-weighted index made of the major Sterling crosses; we find the Pound itself has slid over 6.5 percent over the same period. Does that put the currency at a discount or does it still reflect too much enthusiasm? Evaluating the currency's potential moving forward, we need to weigh crucial fundamental themes, key technical patterns and general speculative exposure. On all three points, it would be fair to say the Pound's drop through the months was well-deserved. Through the April peak, the currency had retraced most of the post-Brexit losses as the market downplayed a disappointing Brexit outcome and speculative position climbed quickly to a multi-year high. From there, the speculative indulgence started to clearly conflict with growing discord within the government and between UK and EU negotiators over the divorce. The premium shrank, Cable led most Pound crosses to significant technical retracement and speculative futures positioning swung dramatically to a deep net negative position. Now, the question is whether the current bearing for the currency fully accounts for the uncertainty ahead or if there is still confidence to deflate.

The Probabilities of a 'No Deal' Brexit

Picking tops and bottoms is an impractical approach to markets. Significant reversals occur rarely in the course of normally developing markets. Pursuing low probability scenarios - even with greater potential returns - is a low statistical approach. And successful trading is largely about finding the best balance between the frequency and size of profitable trades over time. That being said, turns are inevitable. To properly account for their arrival, it is worth raising our requirement for conviction before entertaining trades that conflict with the prevailing trend. In technical and positioning terms, the Pound has yet to present even a tentative turn in favor of the bulls. Yet, that would readily follow once conviction in fundamentals is set. That places the bulk of the responsibility on Brexit forecasts. Thus far, there is still clear in-fighting within Prime Minister Theresa May's cabinet. That is further compounded by the government's struggles with Parliament, and the EU has shown little interest in making the UK's exit a fruitful one such that other members are encouraged to follow a similar path. Given all of these simultaneous pressures, a 'no deal' looks troublingly likely. Yet, there would be no winners from the UK's crashing out of the European Union. In fact, all parties would face serious economic fallout. Considering a compromise is in all parties' best interests, it is a more likely outcome. That being said, the current standing of the Pound undervalues this scenario. 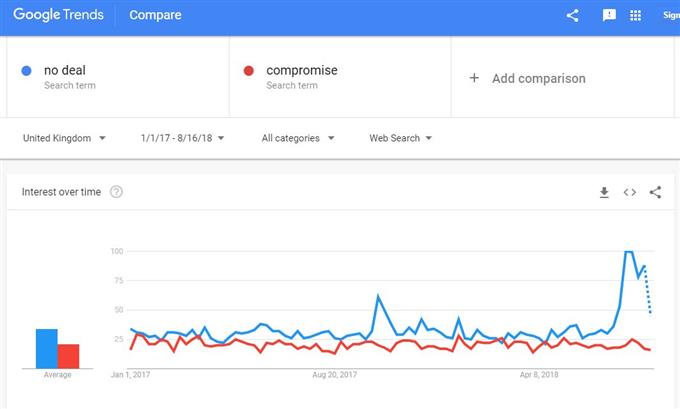 Sterling Options for a 'Good' and 'Bad' Outcome

Just because there is considerable potential - short-term to long-term - for the Pound to recover should Brexit risks ease does not make it a certain outcome. Trading in markets is dealing with probabilities by setting out criteria and establishing options for different outcomes. Arguably, the more difficult course to identify appealing trade opportunities is for a continued slide for the Pound. Certainly, most of crosses could continue to lose ground for the currency, but the return potential for most is significantly reduced by the past months' progress and with a variety of fundamental conflicts through counterparts. For a technical and fundamental mix, the GBPAUD and GBPNZD offer more appealing conditions for sustained Sterling selling. In particular, GBPAUD would do well given the Aussie's more substantial discount in a disconnect between risk trends and rate expectations. Alternatively, the GBPUSD and GBPCAD present stronger cases for Pound gains. The Dollar's rally in particular has come with heavy speculative interest and conveniently overlooked the inevitable blowback from pursuing so many tariffs and sanctions versus large economic counterparts. We focus on the Pound in today's Quick Take Video.