Can the Dollar Extend its Run, And What are the Options?

See how retail traders are positioning EURUSD, GBPUSD, USDJPY and other Dollar-based FX majors along with indices, gold and oil intraday using the DailyFX speculative positioning data on the sentiment page.

This past week, the Dollar has extended an impressive recovery that has been six months in the making. April's break higher earned a DXY Index charge above 91 which cleared an inverse head-and-shoulders neckline while EURUSD would slide through the support of a similar pattern at 1.2200. The next most significant milestone in the recovery - a 'recovery' because these gains are slowly retracing the losses accumulated throughout 2017 - was Friday's sharp move higher. Once again, the DXY and EURUSD pictures were mirrors of each other. From the benchmark exchange rate, sliding below 1.1500 would settle a much larger head-and-shoulders pattern that stretched back 13 months and would in turn drive pair easily through the mid-point of the range established between the 14-year low (at the time) set in late 2016 to the high established earlier this year. Meanwhile, GBPUSD has slide to its lowest level since June 2017, AUDUSD is trading at levels comparable to the very start of 2017 and NZDUSD dropped to a two-and-a-half year low. Clearing these technical bounds theoretically should make momentum easier to foster. However, technicals don't often secure genuine conviction.

Three months ago, I would have considered the US Dollar oversold. It was perhaps easier to make that assessment six months ago when the currency was setting its lows in proximity to key technical guidelines like the multi-year descending channel top for EURUSD at 1.2500/2600. However, even after the recovery from those lows - for the Greenback - and even subsequent gains in April through June; an argument could be made for the currency's value. That was not an evaluation made on a technical basis but rather through more fundamental considerations. Relative to rate expectations and the market's unceasing appetite for yield, the Dollar presented untapped value. That appeal, however, has changed. Again, it has more to do with the systemic and fundamental than the technical. Clearing Dollar resistance this past week would in fact offer greater support for follow through from the bulls than otherwise. However, speculative positioning; we have seen the heaviest net short position in general Dollar exposure via futures swing sharply to the most robust net long position since the end of 2016. More disconcerting is the shift in the fundamental backdrop. The United States' pursuit of sanctions to further complicate trade wars risks alienating the world's dominant financial player and potentially fostering a reversal to full risk aversion. Given the Dollar's position as a carry currency and how much there is to lose if Fed pacing, there is much more to lose. 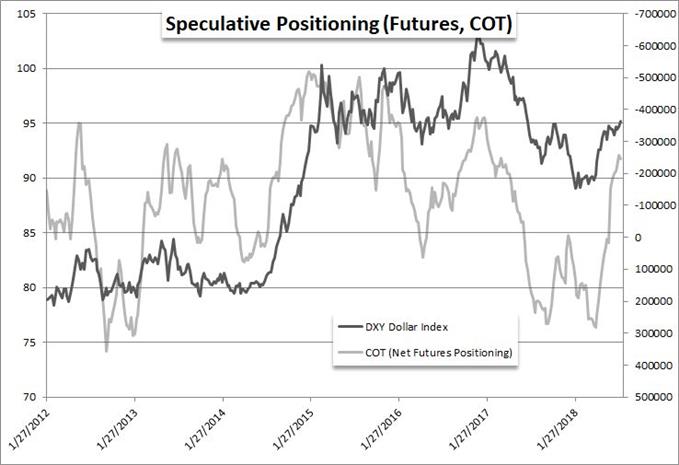 Ultimately, there are a number of contingencies that can make a bullish or bearish case for the US Dollar much more explicit. If all were to hold steady amid the protectionist drive from the US and speculative appetite proved unrelenting, the currency could sustain its course and look to further gains. Alternatively, if risk aversion were to take up permanent position or the country's most prominent trade counterparts were to collectively retaliate for the diplomatic and economic burden put upon them; the Dollar could turn to reverse its gains. We can't know which course the market will take beforehand, but we can prepare for different eventualities. In the event that the Dollar finds support for continued gains, I would look to EURUSD or USDCAD. The former in particular has appealing technicals, but it is the erosion of fundamental support for the Euro that make it particularly ideal. For the alternative tumble from the Dollar, options depend on the circumstances. If it were motivated by a distinct risk aversion, USDJPY and USDCHF offer competitive counterparts. If sentiment isn't a factor, AUDUSD and NZDUSD are similar carry currencies trading at some of the deepest technical discount to the USD. We discuss the technical, fundamental and systemic factors to the Dollar outlook in today's Quick Take Video. 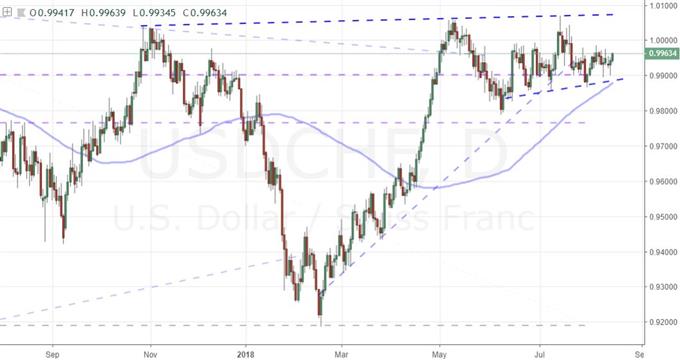