Evaluating Dollar, Yen, Franc and Gold as Havens Amid Fear

An Abrupt - But Unproven - Risk Aversion

What did we witness this past week? There was an unmistakable tumble across the financial system in assets with a 'risk' designation. The variety of 'havens' similarly rose. This abruptness of this move contradicted the steady deterioration of market activity over the preceding days and weeks. Despite the proliferation of tangible threats from trade wars to fading growth forecasts to normalizing monetary policy that was foundation to a decade of speculative recovery; the markets refused to cow to logical concerns. And along came the US sanctions on Turkey. The world's 17th largest economy in the world was already under pressure as the local currency - the Lira - was sliding versus its US counterpart. When the Trump administration announced sanctions against two government ministers last week, the terse rhetoric between the US leader and Turkish President Erdogan started to charge the exchange rate. This was not particularly new as we have also seen pressure exerted on Iran and Russia recently. Yet, the market's sensitivity was amplified Friday when Trump announced the tariffs on imported Turkish steel and aluminum would be doubled. USDTRY rose another 16 percent through the final trading day of the week, and the world started to assess its exposure to Turkish markets. From fellow emerging markets to European banks to carry currencies, the pain was distributed through the market. 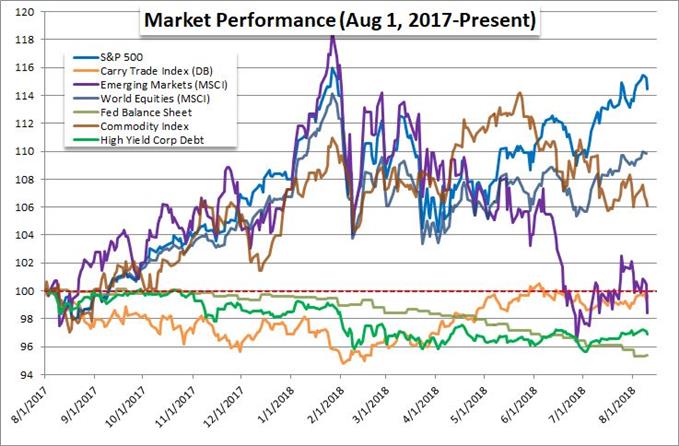 The US Dollar's Key Appeal and Prominent Shortcomings

With the broad slide in risk-related markets through the end of the week, few were surprised to see the US Dollar rally in the capital shift. I count myself among those caught off guard. Not only was it remarkable that a charge of volatility was set off in the midst of a summer lull that managed to downplay multiple high-profile concerns, but the Greenback's growing 'list of defects have started to spread to the mainstream. Nonetheless, the benchmark currency led a charge that leveraged a bullish break to multi-month highs whether we reference the DXY trade-weighted index or equally-weighted measures. From EURUSD, the session's drama translated into a clear break of a 'head-and-shoulders' neckline. Moving forward, the Dollar will retain its role and climb further if the iron is kept to the speculative fire. In liquidity terms, there is no peer to the USD and its underlying Treasuries and Money Markets. However, what if the unwind in sentiment happens at a more controlled burn rate? It will give market participants room to consider how suitable the currency is for such a role when it is at the center of the trade wars and sanctions these past months. Further, President Trump has openly weighed in on the level of the currency, stating interest in seeing it retreat. In a panic, investors will group through the smoke to find the US markets. Absent that extreme, expect the currency to start to falter under such intense scrutiny. 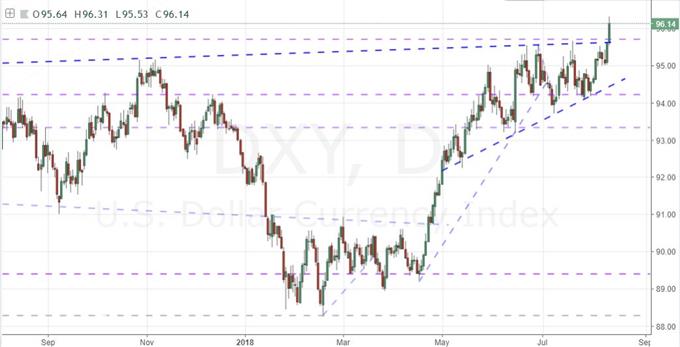 Given the caveats to the Dollar's appeal, it is worthwhile to consider alternative harbors for capital should stability be evaluated on the basis of how many economic penalties a country is pursuing. Through Friday, the Dollar managed to gain against most of its major and minor crosses. There was one likely exception however in the USDJPY. The pair slid, which was not surprising given the pain felt by the Japanese currency across the market. JPY is often referred to as a safe haven, but that is not exactly accurate. Capital is not redirected far and wide to seek shelter in Japanese financial markets. Rather this is a currency correlated to risk trends as the Yen is a renowned funding when the speculative build up is underway. When fear kicks in, the first thing you do before seeking out havens is to cut long risk trades like these low handing carries. The question for this currencies suitability for further risk aversion is the lack of carry trade build up we have seen in recent years and the pressure this places on the ineffectual Bank of Japan. As for the Swiss Franc, most FX traders have made an effort to black this currency out of their mind since January 2015. That is fair, but this is currency represents a long-standing safe haven with the added benefit political backdrop where the government is purposely neutral. If trade wars and sanctions continue to drive fear forward, this would be an appealing currency. Yet, everything considered, there are no better candidates for full-tilt speculative unwind than gold. Recently driven lower by a stubborn rise for the Dollar and speculative benchmarks like the S&P 500, this metal still harbors the best potential for hosting panicked investors in the future. In risk aversion, the complications of trade wars, sanctions, currency wars, normalizing monetary policy and more will plague many markets. It would however present a strong benefit for the metal. We discuss havens as risk trends start to rock in this weekend Quick Take Video.