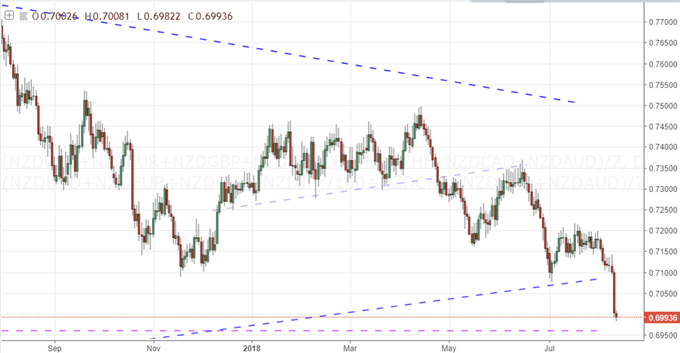 See how retail traders are positioning in NZDUSD intraday using the DailyFX speculative positioning data on the sentiment page.

It is rare nowadays to see high level volatility and/or productive underlying trends. The New Zealand Dollar (Kiwi) seems to be promoting both. The currency has been under significant pressure for some months owing to its steadily deteriorating monetary policy outlook and a general distaste for the historically-low carry the currency renders against a backdrop of uneven risk appetite. The question therefore is: how novel is this fundamental perspective? Does the market need to account for a troubled outlook that is not presently reflected in the value of the currency or has its slide thus far moved the currency to a fair discount? The fade for the Kiwi is up for debate, but the recent event risk has nevertheless stirred a sharp market response. Yesterday, the RBNZ held its benchmark lending rate, but there was enough in the rhetoric to send the currency tumbling. The outcome (no change in the 1.50 percent benchmark rate) was fully expected. Further, the rhetoric voicing caution with a dovish lean came as no surprise. And yet, the Kiwi Dollar collapsed through Thursday's session - with clear breaks for many crosses and multi-year lows for many more. The concern over growth and financial stability was more novel than the detachment from lackluster inflation. Systemically, this further undermines an already-deflated carry currency. Yet, how much further it needs to drop in order to account for this lost status is up for debate.

Evaluating Whether A Provocative Breakdown Can Sustain Trend

There is little doubt that the New Zealand Dollar's tumble this this past session is remarkable. Not only is the move intense, it has sheered through a host of meaningful technical levels of support among the crosses while there are further a run of multi-year lows being registered. However, a technical break is one thing and the institution of a prevailing trend something else altogether. To establish evaluate the potential follow through for the Kiwi's ambitious move, we need to evaluate the circumstances for the broader market and New Zealand markets in particular. Most of the momentum to develop behind NZD lately is the product of its own fundamental charge. While the RBNZ's views for the future were undeniably dovish - particularly relative to the Fed, BoC and BoE - it is not particularly extreme compared to those central banks still pursuing QE. What's more, the perspective for the Kiwi has chartered an increasingly dovish adjustment for months. Momentum through this channel requires a systemic risk aversion - not yet apparent - or absolute recognition that the Kiwi is losing its carry status far into the future - an abstract concept for trend interests. The broader market conditions are even more troublesome for those seeking out trend. Development of a clear risk (feeding into carry) trend has been lacking for some weeks, but the seasonality pinch to kick in just recently has drained much of the potential for any trend to arise through this or any other currency. 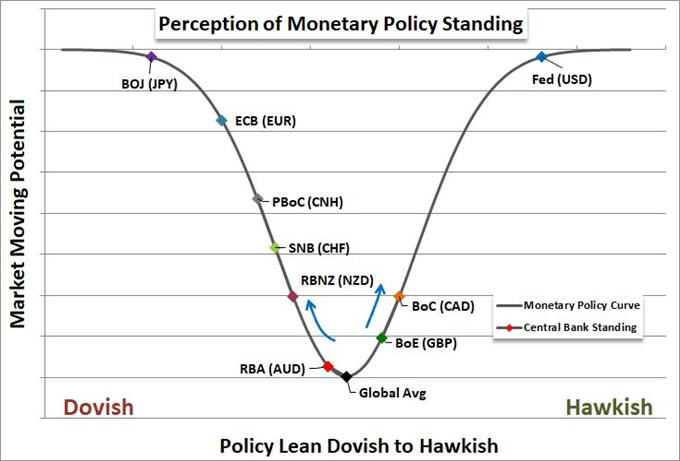 Having an Option for Different Scenarios

You may disagree on the potential for the Kiwi, risk trends or general activity of the market or you may not. Regardless, you should consider options for various outcomes. The currency's volatility and the proximity of technicals deserves the attention of traders regardless of our ultimate bearing. If the NZD's tumble post-RBNZ was a one day affair, we should seek out those pairs that are still range bound with clean technicals and provides a convincing counterpart to amplify the rebalance. For this scenario, I'm partial to GBPNZD given clean technicals, but the retreat in Kiwi could readily be offset by any fear to arise for the Pound via Brexit talk. My preferred candidate a check of the dominant trend would be AUDNZD. This pair neutralizes so many competing fundamental themes (risk trends, trade wars, commodities, etc) and drills down to the foundation. It also has a robust technical bearing. Alternatively, if the Kiwi does continue to dive, we should find a counterpart that has great potential to rally. It is on that necessity that I am writing off NZDUSD. The Greenback has few friends in current conditions. Instead, I like NZDCAD, NZDJPY and NZDCHF. The last two represent safe havens which would best serve if risk aversion to kick in. That is feasible but still a lot to ask given our liquidity conditions. NZDCAD meanwhile can exploit the Kiwi's weaknesses with a counterpart that is distinctly hawkish without the full speculative saturation that the US Dollar represents. We discuss the volatility behind the New Zealand Dollar, the conditions that will channel its potential and the options for different scenarios in this Quick Take video.