Would the Trump Administration Resort to Selling the Dollar?

Historically, the United States has maintained an official stance that it favors a strong Dollar. There is an agenda behind this stance beyond the assumption that the world's largest economy simply wants to be charitable to other countries that depend more heavily on their exports. Through a strong currency, there is a fortification in both the appeal of the country's assets and its general credit quality. That in turn promotes stability in the US Dollar which fosters a view that the currency represents a safe haven in times of turbulence, a reserve for global stability and an international medium for transaction that would otherwise be complicated by unreliable conversions. These various roles have driven the Greenback to its current position as the undisputed benchmark of the world. Yet, this position of dominance is not guaranteed. The US currency itself took over from the Pound around the first and second World Wars. Should the use of the Dollar dwindle, the side effects will evolve slowly but their influence would be systemic. The position of economic dominance, unprecedented influence over global affairs and the 'dividend' earned through its financial markets by virtue of its weight could slowly evaporate. This would be a costly sacrifice, but the current administration has made clear that few norms are so sacred as to preclude their use to pressure favorable results in negotiations.

An Administration Willing to Break from Convention

At this point, it should be clear that the Trump administration is willing to pursue the unorthodox in policy in order to achieve its stated goals. Having embarked on a trade war, the government has broken from numerous administrations before it whereby the pursuit of global growth through trade offset most concerns over questionable trade practices by counterparts. It is this path that makes the shift to an outright currency engagement a more probable scenario. It is clear from the rapid escalation of tariffs against China - the most flagrant trade peer to flout the rules - that the United States is looking to force a favorable negotiation. Thus far, the Trump administration has implemented a virtual global import tax on global imports of steel and aluminum along with a targeted $34 billion in intellectual property targeted tariffs against China specifically. A further $16 billion in duties against this trade giant are due to kick in later this month. They have further added to the effort with a threat by suggesting $200 billion and even the entirety of Chinese imports into the country, and yet China defiantly meets the efforts with action or threat of like-for-like retaliation. That is not the supplication the US is seeking for negotiations. As China runs out of US imports to threaten, the effort is more likely to turn to even more unorthodox retaliation. That will likely lead the US to ramp up the pressure beyond simple taxes on imported goods. What's more, US President Trump has already accused China of pursuing current manipulation for an unfair advantage. That makes it an appealing option for a leader who tends to use policies he perceives being used against the United States against the instigator.

What Happens if the US Uses Devaluation as a Tool

If the world's most liquid currency, dominant means for transaction and primary reserve were to suddenly find itself prone to the whims of political intent; the implications for the global financial system would be troubling. For the US currency specifically, the effort would almost certainly result in a significant depreciation. In the short-term that would be a move owing to the 'success' of the government's policy. However, beyond that initial slide, the pressure would become a global charge. Global investors who invested in US assets in large part for the relatively high rate of returns to be found following the Fed's gradual policy tightening and the steady clip of growth will face a sudden risk in the form of volatile exchange rate risk. Deeper pools of capital holding US reserves (central banks, wealth funds, pensions, etc) will be prompted to accelerate plans to diversify away from heavy concentration in top credit US assets. The intent to balance heavy exposure to US Treasuries and thereby the US economy and financial system has been in place since the Great Financial Crisis when the fallout from the subprime housing market seemed to sink capital markets around the world. Yet, making such a systemic shift in a world of distortionary monetary policy was not easy. That said, any reservations these groups may have to make a change would be quickly superseded by such a currency war overture. This would be a permanent discount for the Dollar (not just a pullback to eventually rebound) and the resting level of volatility behind the currency would naturally settle much higher. We discuss the current 'strong Dollar' policy in the US, the possible motivations for abandoning it and the implications for the market in this Quick Take Video. 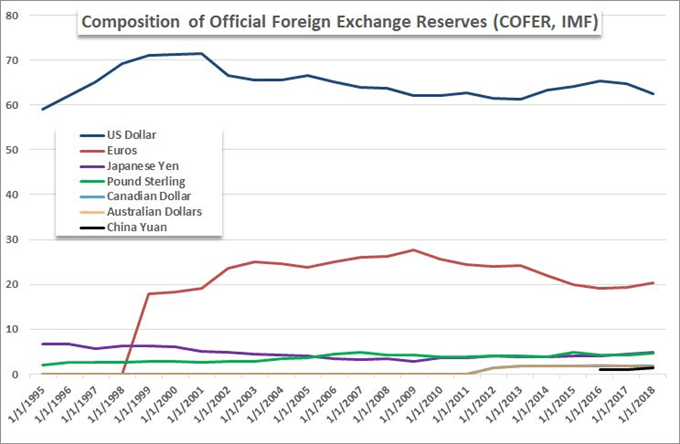