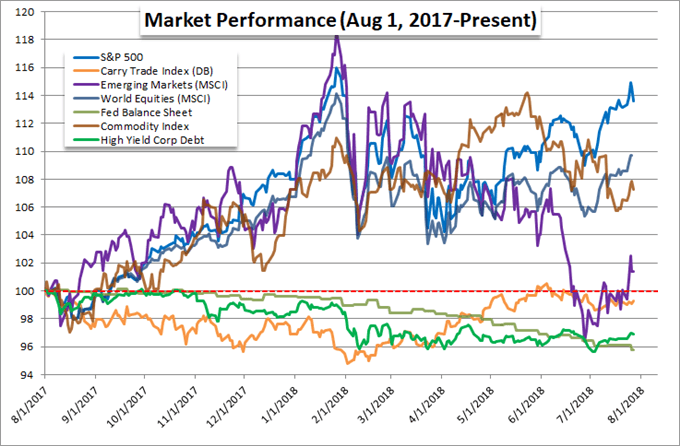 When Apple, Emerging Markets and Dollar Pairs Try to Break Away

It is important to identify, evaluate and track major fundamental themes. If there were any first rule of incorporating fundamentals into your trading, that would be it. However, these overriding influences - such as general risk appetite trends, trade wars and Brexit - seem to confound many traders. These themes seem so complicated and in flux that it can feel near impossible to adapt its sway into trading terms. In reality, there is little need to have a full comprehension of the weighty concepts. Instead, it is crucial to appreciate that there is enough command from the events or headlines to rouse the target market to a meaningful move with a fair chance of follow through. Now, it is important to differentiate systemic themes like trade wars from discreet event risk such as the NFPs released this past week. While previous years saw the US labor report charge monetary policy, which was itself redirecting the winds of speculative positioning; the Fed today has made its intentions explicit while labor data has long ago established its favorable trend. In other words, it was very unlikely that we should see a true trend born of last month's labor statistics.

Systemic themes like risk trends and trade wars are certainly capable of forging a decisive trend for currencies, regions or even market-wide investor sentiment. That said, these same influencers can also work to sidetrack progress when the signal supports uncertainty in value. That happens to be the uneasy state of indecision in which we currently find ourselves. As we await a high tide of conviction in the next big driver of capital flows, it is worth keeping tabs on outliers. In large and liquid markets, there are always specific assets that seem to defy what is unfolding across the system. Yet, those unique developments are not typically wise investments/trades to pursue. Consider the stocks that attempted to diverge from the wide market collapse during the Great Financial Crisis (fall 2008 for its peak) by rallying. There were indeed stocks that did appreciate during one of the worst financial collapses in in modern history. Yet, these brief shooting stars of outperformance were destined to be swallowed up as conviction or patience would run thin. Imagine the probabilities of picking one of the very few shares that could rise during what seemed at the time a financial catastrophe. Then add to that unlikely scenario the virtual impossibility of happening upon the extreme anomaly whose countertrend could persist. This concept isn't just applicable to such systemic environments. Shares that comprise a broad economic sector often move in tandem and subsequently check wayward member shares. For example, a divergent move from GM is unlikely to run far or long relative to other auto manufacturers. Generally speaking, surprise moves built on temporary or limited elements will revert to systemic motivations. 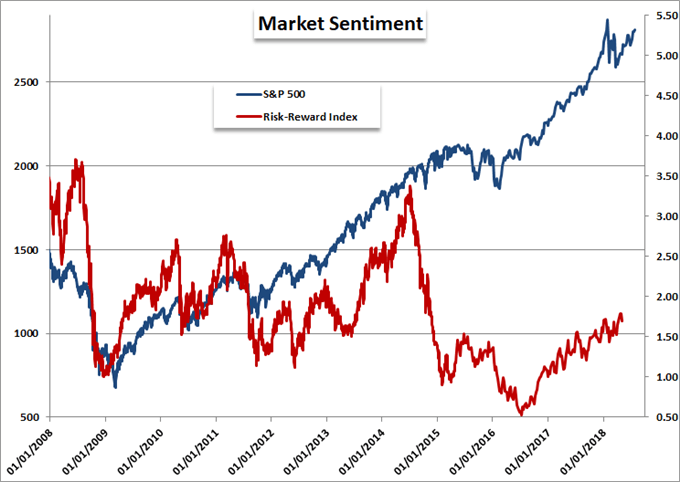 There have been many outliers to whet speculative appetites these past weeks and months. Yet some have already converged to the fundamental undercurrent or are tentatively threatening to do so. Perhaps the most headline-worthy example of a high-profile instrument running independently from its closest peer groups was this past week's Apple move. The world's largest publically-traded company hit it a record in both price and historical market cap (surpassing $1 trillion). How long will this flush of enthusiasm for AAPL run? Well, considering its own shares struggled Friday and key indices seemed to pick up little spill over from the robust move; it is likely that the rebalance is soon. This concept doesn't carry a bias for direction either. Facebook shares collapsed last week - also on earnings - leading to a drop of nearly 20 percent in value in a single day. The tumble has already steadied though while the FAANG, Nasdaq and S&P 500 have held steady and in turn seeded speculation that perhaps this tech stock is simply trading at an enticing discount. Moving beyond the shares ecosystem, we can see this connection between various speculative asset classes. The EEM Emerging Market ETF for example has a distinct connection to general sentiment. That said, it has been one of the most dramatically divergent 'risk' assets through previous periods this past year (in part due to trade wars), though it consistently returns to speculative appetites. Even volatility readings between different markets tend to reconverge. The VIX has seen extreme bouts of activity - normalized for typical product nuance - but it has repeatedly converged with similar readings for yields, commodities and exchange rates. Even the heavily liquid Dollar based majors form a gravity that draws ambitious moves back in. USDCAD is currently attempting to run astray of the underlying Greenback's path but correlations show such efforts rarely last long. We discuss trading outliers and how to approach them in this weekend Quick Take Video.