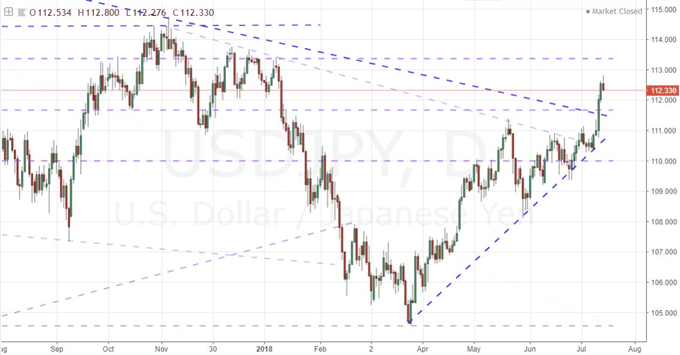 The Case for Fading the Impressive USDJPY Breakout

USDJPY: A Pair that Seemingly Defies Markets At Large

It is difficult to come across an exchange rate or asset class that is even feigning effort to establish a trend. Amongst the majors, range conditions are ubiquitous. While not all of the pairs are carving out as clean a range pattern as EURUSD, the establishment of congestion further from the outer bounds of longer-term technical range extremes should heavily curb our anticipation of impending major breaks much less trend development. Yet, amid such much restraint, there is one pair that stands out proudly from the pack: USDJPY. This particular exchange rate has put in for its best week in 10 months and triggered some remarkable technical levels in the process. It isn't difficult to register the importance of the 111.50/65 resistance that was cleared this past week. Not only was it the upper bound of congestion over the past six months, it also happened to represent the mid-point of the late 2016 peak to March 2018 low as well as the well-established trendline of lower highs stretching back three years. There was heft to this area that we cleanly drove through.

The Trouble with USDJPY: The Dollar

As remarkable as the technical progress this past week was for the benchmark exchange rate, I think the outlook for the pair is just so troubled that it would represent an unreasonable risk to pursue. In fact, upon evaluation, it seems a more viable candidate for fading (shorting against the short-term trend) as the fundamentals and practical conditions behind the market are likely to trip this effort up. Further, should the recent drive lose traction, it will draw out speculative interests looking for market levels to naturally rebalance. My first concern with USDJPY's ability to keep falling is the Dollar's position in this effort. The Greenback on a trade-weighted and equally-weighted basis has so far proven unable to clear a month of congestion while the steady push forward of trade wars will eventually cast the light back onto the provocateur of so many fronts for economic standoff. Further, the balance of risks moving forward sees little to gain from Fed rate forecasts than there is to lose. That is further true of risk trends. 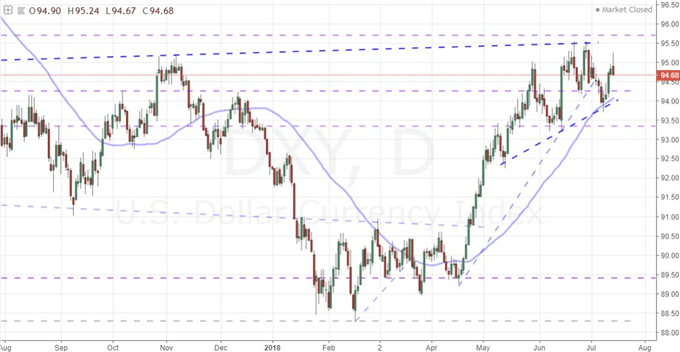 The Trouble with USDJPY: The Yen Crosses

On the opposite side of the pair, the Japanese Yen doesn't promise to carry USDJPY higher in the absence of a US dollar run. While there is plenty of event risk ahead, there is very little that can genuinely spur a lasting move from the Yen crosses. The exception is the change winds behind risk trends. While there is very little carry to be found in pursuing pairs based on the Japanese currency, speculation over future monetary policy shifts has ensured a healthy exposure across the financial system. Therein lies the problem for USDJPY and other Yen pairings: risk appetite has fueled carry currencies to the unimpressive heights for which they currently hold. There is still, however, plenty of premium to lose should confidence falter. Furthermore, in an evaluation of scenarios, there is very limited capacity for the market to rush another wave of capital at already record highs, but the systemic risk posed should a concerted risk aversion sweep in will drag this and other JPY crosses down with it. When there is a skew in both probability and potential (scale of impact should it come to pass), we should take note. 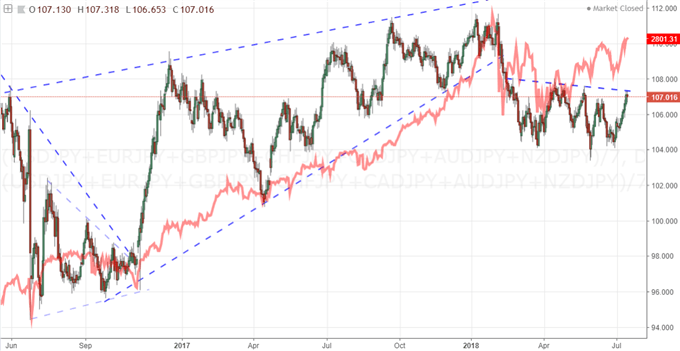 Between the Dollar and Yen, there are plenty of issues that would trip up a meaningful effort to establish a USDJPY trend. However, one of the most seemingly pedestrian but most persuasive considerations that will work against this early trend are broader market conditions themselves. As mentioned in the beginning, it is difficult to find legitimate trends - whether young or mature - across the financial system. The lack of commitment should come as little surprise given the rise of trade wars, the fading in global growth forecasts and an outlook for central banks to slowly exit the markets. Ranges are ultimately the most common technical picture across the seas of technical charts I follow. Will trends eventually return? Yes, but in the meantime, there is an advantage to play in range trading or working against unrealistic technical developments that contradict our environment. Deciding the best course of action in these markets is difficult, so patience is once again essential. That said, attempts to beat gravity usually involve volatility and high probability rebalancing. We discuss how all of these factors come together to shape a strong appeal for fading a clear break for USDJPY in this weekend Quick Take Video.