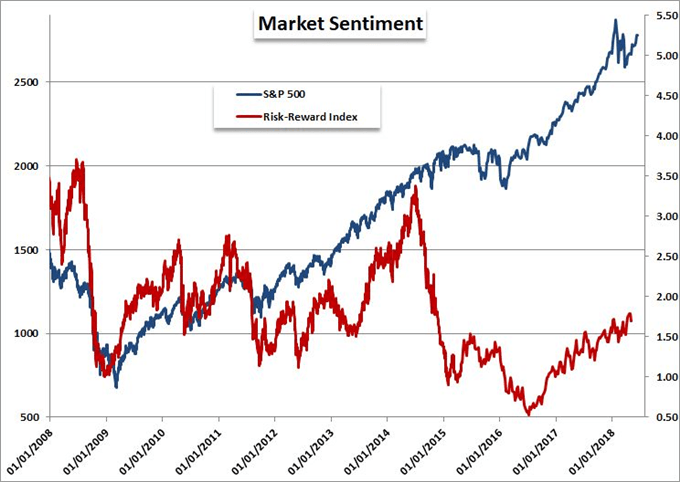 The Root of the Next Market Collapse: Leverage is Everywhere

Many speculators only care about volatility and not the practical implications for trade scenarios. See how retail FX traders are positioned for USDCAD, EURUSD and GBPUSD heading into a theme and event laden final trading session of the week on the DailyFX Sentiment page.

Always Fighting the Last Crisis, Not the Next

Recently, Federal Reserve policymaker John Williams remarked in a discussion that elevated levels of leverage were more often the genesis of recession than the more traditional markers for which we typically monitor. On that point, I agree with him whole-heartedly. However, it went on to suggest that he saw no evidence of excess exposure like he witnessed earlier in the 2000's. That, is a troubling assessment. It is particularly problematic that Williams is unconcerned with our present market conditions considering he is the new President of the New York Federal Reserve - a branch that is responsible for the financial markets and a permanent voting seat. We have seen too many periods of instability and economic retrenchment follow similarly benign assessments. The problem is the focus on catalyst rather than systemic issue - dooming us to repeat such cycles. We may not have the same vastly overleveraged home financing industry that we had in 2007, but neither did the Great Financial Crisis succumb to the same excess in tech shares as was the case in 2000. The Dot-com boom and bust didn't follow the same course of the 1997 Asian financial crisis, and event was at meaningful odds to the Japanese-borne Savings and Loans crisis.

While these various financial crises over the past decades have followed significantly different triggers, they ultimately share a common core: excessive leverage. Whether the excessive exposure for the financial markets was directed towards housing (through derivatives), technology shares, emerging market and emerging Asian market assets, Japanese financing or otherwise, the underlying conditions for instability was ultimately the same. What is leverage? Sure, it is the application of borrowed money towards speculative endeavors. But it is also more broadly indicative of a market that is defined by an environment where investors have exposed themselves to increasingly risky assets while in turn ignoring the risks associated to the position. That is thematic leverage. And, that is what we are dealing with once again.

Record Leverage Across the Financial System

If we are looking for a specific industry with an over-extended leverage, we will not find it in the traditional outlets. Regulators and policymakers are fairly good about putting buffers around previous trouble spots, but they are not particularly adept at heading off anything but the most explicit risks before they catch fire. What is particularly troubling about our present situation is that where there isn't an overt exposure for a particular asset, there is clear excess across the global market in more rudimentary market structures. From investors, we find not only the speculatively-driven S&P 500 diverge from basic risk-reward assessments, but actual broker-level leverage has hit a record high alongside with the exposure in popular ETFs. From the corporate sector, there has been a drive to buy back shares funded by freshly issued debt. Governments and central banks are arguably the most remarkable for this dubious distinction with the former pushing record highs (specifically the US) while the Fed and other major central banks sport massive QE programs or record debt levels in order to encourage risky behavior. Yet where so much blame is placed on banks, governments and more, it is worth further noting that consumers are themselves boasting record leverage via debt. 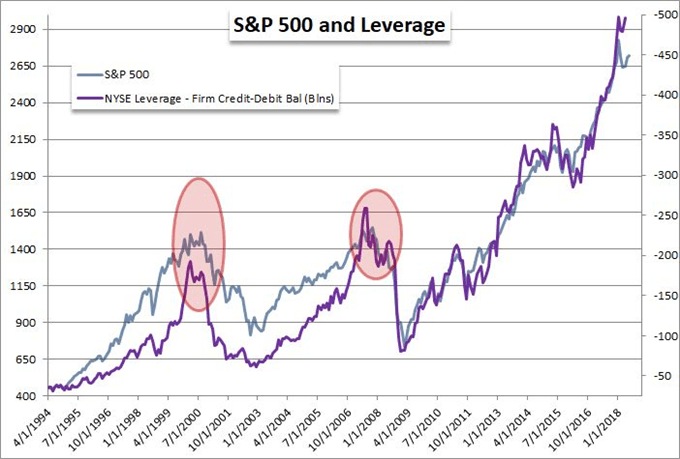 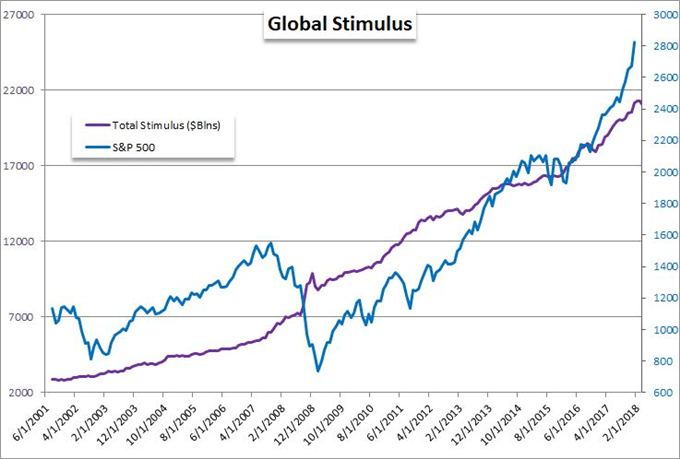 A global excess in speculative exposure through so many different market categories and asset classes makes for a particularly worrisome investment environment. Clearly, there is a strong collective sense of complacency and disregard for the risks clearly involved, but that doesn't mean we should just indulge unrealistic expectations and 'go with the flow'. To commit to such a position with an intention to carry exposure for weeks or months or longer is unconscionably risky given the circumstances. Shorter duration trades with very practical targets is appropriate for our current conditions. I'm particularly skeptical of a market that will continue to forge meaningful gains in risk-oriented assets; but then again, I'm no more enticed to fight the prevailing wave to short general risk trends. Ranges and short-term breakouts are far more appropriate setups to a portfolio than attempting to find breakouts with extreme intent much less a systemic trend. We discuss what poses the greatest risk to our financial market (and likely Main Street) in today's Quick Take video.