The US Dollar has started to pull back, and this continued an October that’s thus far been filled with mean reversion in the Greenback, even with the prevailing bullish bias.

The currency did technically push up to a fresh yearly high last week, but similar to what had happened in late-September, buying pressure dried up around 94.50 and prices have fallen back into support. From the Daily chart or longer-term, this could be enough for that pullback to allow for bullish continuation. On the below chart, we can see prices pulling back to support at prior resistance, taken from the ascending triangle formation in the US Dollar that had built ahead of the Q4 open.

To learn more about the ascending triangle, check out DailyFX Education 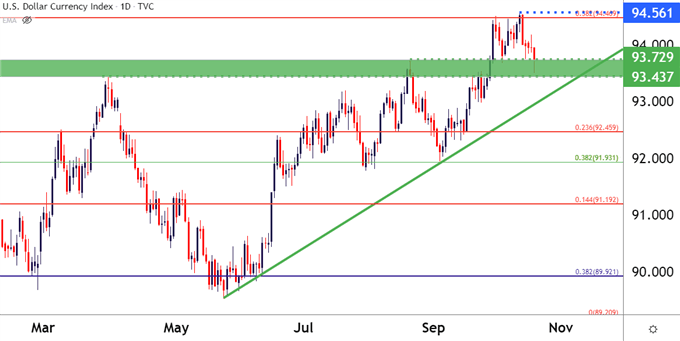 From a shorter-term look, there could be some deeper retracement potential here, noted by the upper wicks on the prior and current four-hour candle, both of which have printed inside of prior short-term support, plotted around 93.83. This can keep the door open for a deeper move within the longer-term support zone; and perhaps even down towards the 93.20 area.

For USD-weakness, I looked into GBP/USD, AUD/USD and USD/CAD. 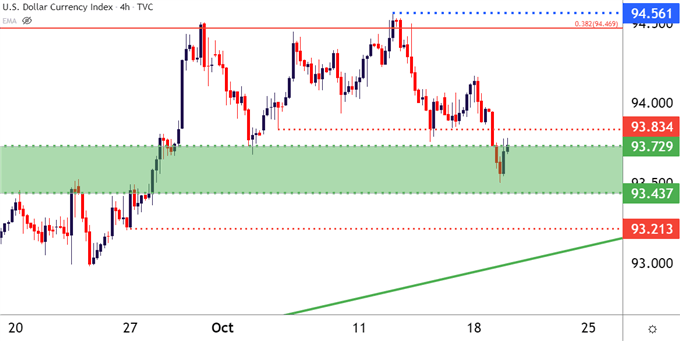 On the long side of the US Dollar, the short-side of EUR/USD remains interesting. I had looked into the pair last Friday, positing that a pullback could be near given the lack of seller drive around support. This allowed for the build of a falling wedge formation, often approached with the aim of bullish reversals.

On a short-term basis, that’s played out so far, and price has run directly to the resistance level I was looking for around 1.1664. Given short-term dynamics, there could be some higher-low support playing in, and that could allow for a move up to the bigger resistance zone, taken from prior support around the 1.1700-1.1736 area on the chart.

On the driver front – European inflation is released tomorrow morning.

To learn more about the falling wedge, check out DailyFX Education 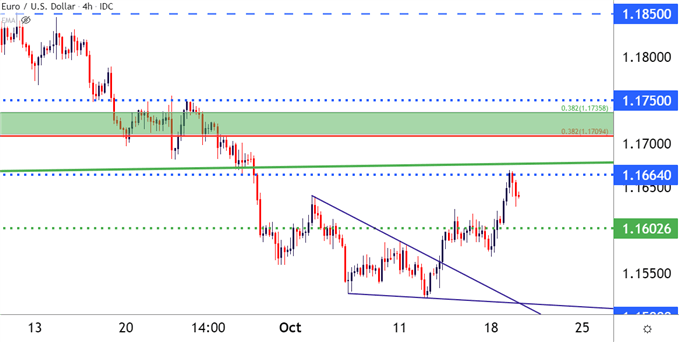 GBP/USD Breaks Out from Ascending Triangle

Also in that Friday article, I highlighted breakout potential in GBP/USD as the pair had broken out from another ascending triangle formation. And the previous ascending triangle, I had warned about that the prior week, just before GBP/USD breached above the 1.3650-1.3678 zone of resistance.

The pair is now testing a bearish trendline, taken from swing-highs in June and September, and given the recent pace of gains, a pullback seems like it could be in order. Support potential remains at 1.3750, the psychological level that previously held resistance ahead of the most recent breakout. 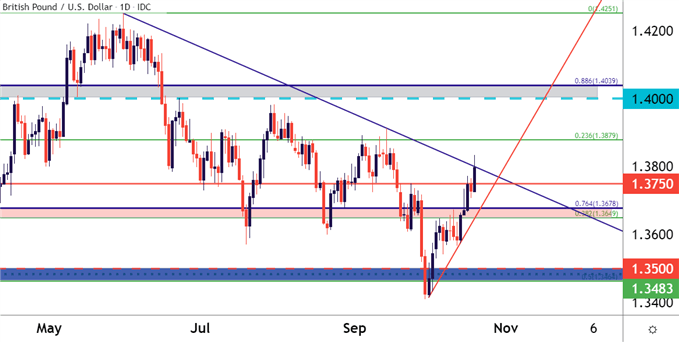 I had looked into this one during the mid-week webinar in early-October, highlighting a deductive read that was opening the door for breakdown potential in USD/CAD. With some help from oil prices, that move has continued to build in. But, at this point, the pair is starting to feel fairly oversold given the pace of recent losses, and there’s been a recent build of a falling wedge, which can precede pullback moves.

In the webinar, I highlighted three different areas for resistance potential in the pair, which keep the door open for bearish continuation. USD/CAD remains an attractive venue to look for USD-weakness to continue.

To learn more about the falling wedge, check out DailyFX Education 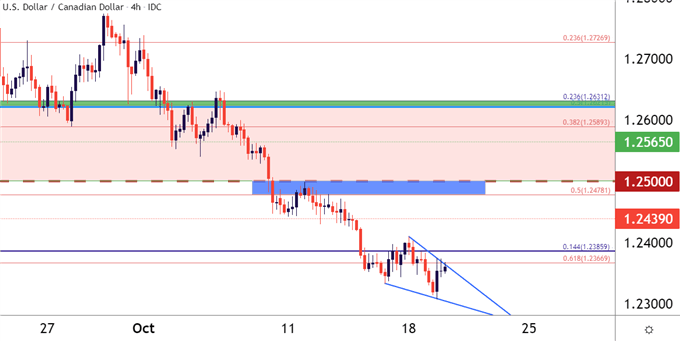