After weeks of Fed officials downplaying inflation fears and suggesting that rising US Treasury yields reflect economic optimism, interest rate expectations remain firmly anchored: Fed funds futures are pricing in a 95% chance of no change in Fed rates through January 2022. The bottom line: don’t expect the Fed to do anything along the interest rate channel anytime soon. 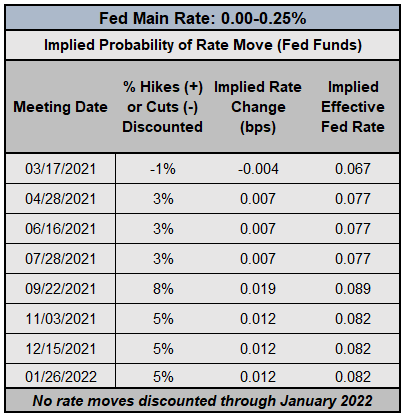 The Fed’s quarterly Summary of Economic Projections, that first of 2021, may emphasize this line of thinking. After all, we will receive an updated ‘dot plot,’ the illustration of rate expectations by individual FOMC members into the next several of years. But changing the dots insinuates that they’re entering rate hike territory, despite the fact that taper plans haven’t been laid out. There’s an argument to be made that introducing significant changes to the dot plot could spark the taper tantrum that many fear.

Moreover, it was just last August when the FOMC voted unanimously for the new policy framework calling for overshooting their inflation target. Recall that on FOMC there are 18 participants. As Steve Matthews of Bloomberg News noted earlier in the day: “It takes nine to move the 2023 dot up from near zero. Five were there in December.” 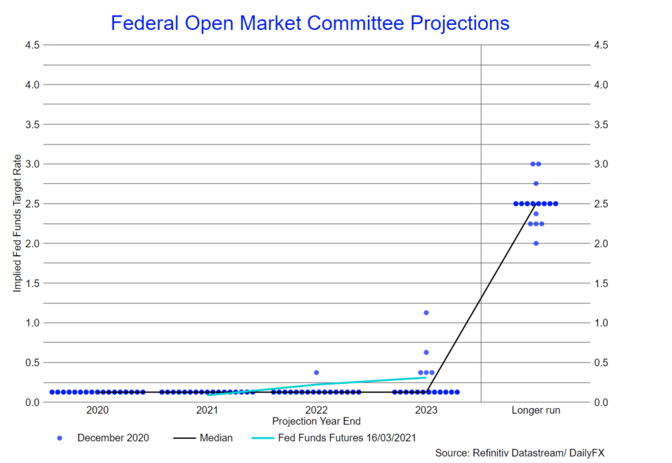 Instead, the FOMC may opt for a simpler solution to prevent a further backing up of yields: extending the supplementary leverage ratio (SLR) requirement for banks, which have been exempted from counting Treasuries and reserves against their capital as a percentage of total assets for the past year during the pandemic.

If the SLR requirement rolls off, US banks would likely be forced to increase their capital holdings and/or reduce their Treasury holdings, and a wave of Treasury selling could push yields higher again. Simply announcing an extension to the SLR requirement at today’s meeting may remove a potential factor for more volatility in US yields in the near-term.

We’ll discuss these questions and more in context of the March Federal Reserve meeting and Fed Chair Jerome Powell press conference starting at 13:50 EDT/17:50 GMT. You can join live by watching the stream at the top of this note.