The Elliott wave patterns for US Dollar Index and S&P500 show these near-term bullish moves may be terminal. Larger corrective waves may unfold from just higher levels.

The video above is a recording of a US Opening Bell webinar from November 11, 2019. We focused on the Elliott wave patterns for key markets such as EUR/USD, DXY, USD/JPY, S&P 500, gold, silver, Ethereum, and Bitcoin.

In last week’s webinar, we discussed how the down trend for US Dollar Index is mature and a rally back to 9750-9850 is not out of the question. On November 8, DXY did rally up to 98.00. DXY may rally further to but not much beyond last week’s high. We are viewing this rally as being temporary and likely to hold below the October 1 high of 99.23. Initial targets remain below 94.60 with even lower levels into the 80’s possible. 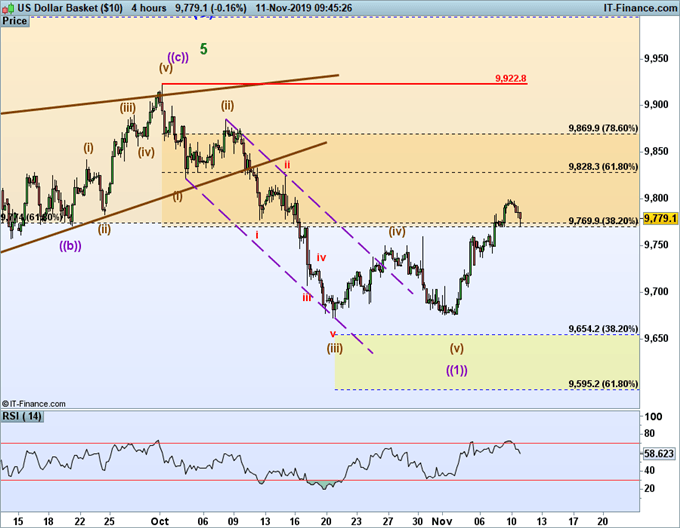 We can count a completed Elliott wave impulse from the October 1 low to the November 4 high. There are 8 scenarios for after the completion of an impulse wave. In this case, the possibilities with higher probability are scenarios 1, 4, and 6. Under all of these scenarios, we are anticipating another large bullish turn occurring above 1.0880. The reversal zone may take place 1.0940-1.1000. We are anticipating the next jump higher to reach 1.15. Bear in mind the larger forecasted rally for EUR/USD is to 1.18 and possibly higher levels.

Bottom line, several wave models are pointing to above 1.18 while EUR/USD holds above 1.0880. 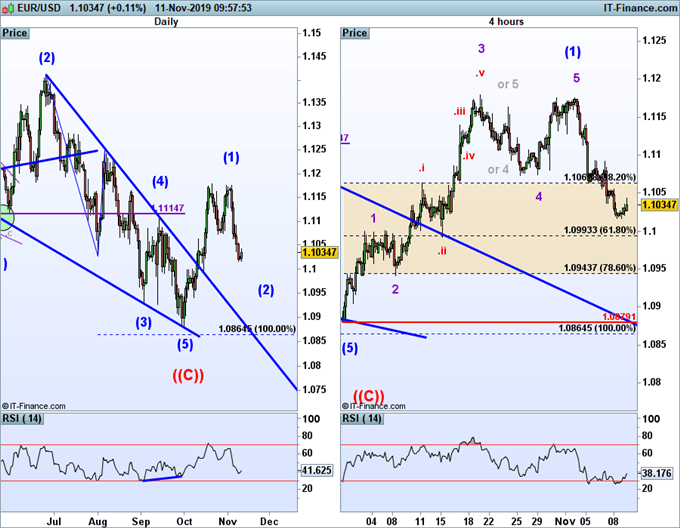 S&P 500 has continued to hit new all-time highs though we believe these new highs are part of a larger corrective pattern. It may not make sense at first how a corrective pattern can be carving into new highs. In Elliott Wave Theory, it is commonly found within the ‘B’ wave of flats or the ‘B’ wave of triangles. These waves are known as sucker waves and the current rally in S&P 500 may prove that.

The consolidation from April 2019 to October 2019 is being labeled an Elliott Wave triangle. Once a triangle forms, the break from the triangle is considered to be a terminal wave. Therefore, the current rise to new all-time highs is likely the finishing wave of the trend that began December 2018.

Some wave relationships appear near 3250 and 3500. SP500 does not have to jump that high. If S&P500 does make it to these levels, we’ll look for reversal symptoms to assess the probability of a turn.

Bottom line, after a run higher, this wave terminates and a retest to the December 2018 lows is high probable. A move below 2854 is enough evidence to suggest the top is in, though warning signs appear near 2900. 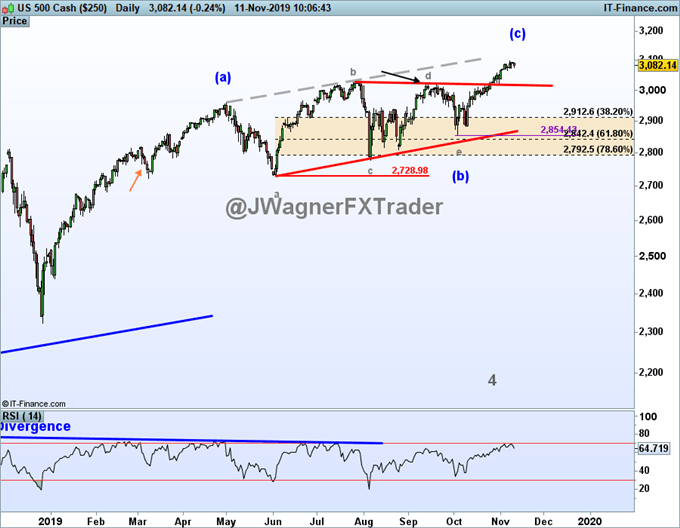 The cryptocurrency space is becoming interesting. On October 11, we forecasted a large rally possibly forming in Ether. After a few days of softening prices, Ethereum has broken up outside of the green trend channel only to continue sideways trade. So far, this price action is considered bullish. A break above $198 would provide further evidence for the bulls. The Ethereum price forecast is for new highs above $364 and possibly up to new all-time highs.

A guide to day trading Bitcoin and other cryptocurrencies 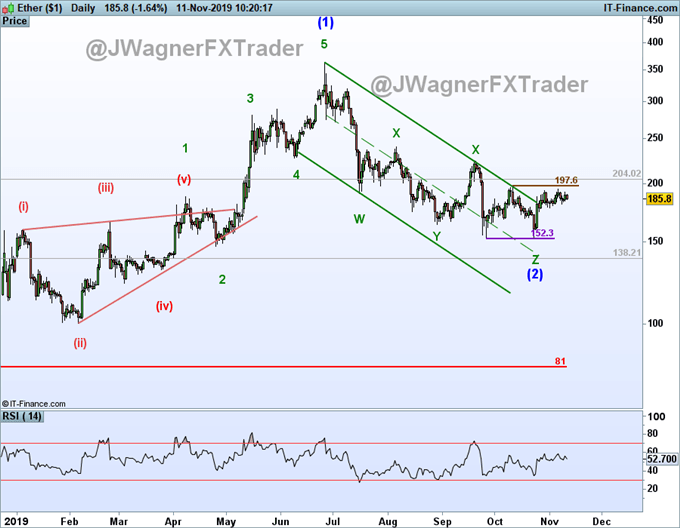