The U.S. stock market recently shortly up losses that could have led to a much larger decline given where they were, and on that the indices could chop some more before making a sustainable move. The DAX is in breakout territory, but could use a rest before trading higher. Gold remains contained in a downward channel (potential bull-flag), this leaves the outlook negative near-term but still bullish longer-term.

The Dow Jones held off the breaking key support via the 200-day MA and neckline of a would-be head-and-shoulders that is basically off the table with the recent bounce severely denting the pattern’s integrity. This is bringing into play potential for another pattern, a wedge, built as a result of contracting price action since June.

Some more time will need to pass to make the pattern more complete, but could come in the not-too-distant future. For now, resistance coming from the top-side trend-line of the wedge could push the Dow lower, with the most significant support coming from the June trend-line and 200-day.

DAX in breakout territory, has support to watch on pullback

The DAX has put together an impressive run as of late, pushing the index beyond the January 2018 trend-line. This has price trading around the year high made in July. A pullback to solid support in the 12500/470 vicinity could offer an attractive spot for would-be longs to join in on a push towards higher resistance levels.

Gold is currently trending lower, as evidence by the clear lower-lows and lower-highs in place since topping last month. Pressure is anticipated to remain, with support arriving at 1459/53, then the lower trend-line that makes up a would-be bull-flag. The bullish configuration could use some more time to build before garnering enough power to run gold through the 2011/12 levels it has had so much difficulty with. Bottom line, short-term bearish, but in time a bull-flag should give longs the upper hand again towards higher, possibly much higher levels. 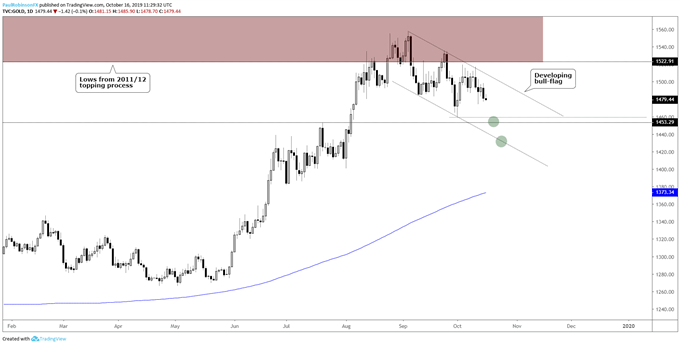