The video above is a recording of a US Opening Bell webinar from October 14, 2019. We focused on the Elliott wave patterns for key markets such as US Dollar Index, EURUSD, USDJPY, AUDUSD, GBPUSD, silver, gold, crude oil, SP 500 and Ethereum.

EURUSD Broke the Trendline, Evidence Builds a Meaningful Low is in Place

EUR/USD has finally rallied above the (2)-(4) trend line. This is an important first step to building a larger base as it indicates the mood of the market is changing since June.

If you recall, on October 1 we forecasted a large rally for EUR/USD. Several levels were cited that if broken signal further evidence of a high probability rally. So far, two of those levels have been broken with the most important level being 1.1115. If 1.1115 breaks, then the next levels to watch out for include 1.15, 1.18, and possibly 1.25.

The behavior and structure of the patterns should a rally develop to 1.18 will provide us with clues on the longer-term pattern. 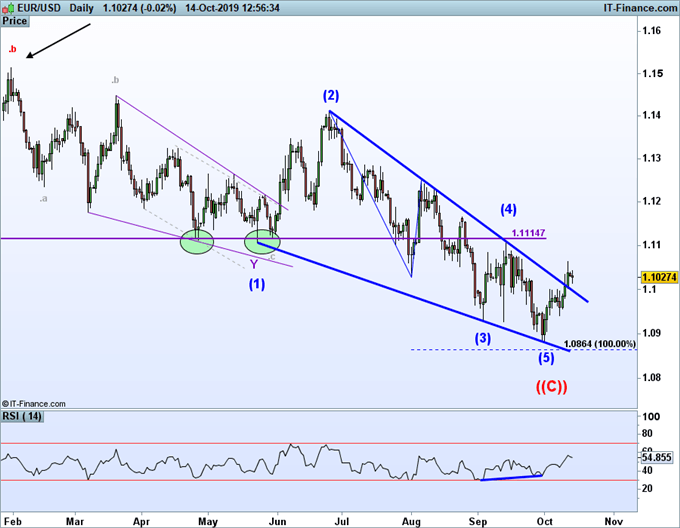 Off the low in December 2018 to the next low in September 2019, this pattern is an Elliott wave 5-3 structure. If my assessment of this pattern is correct, then the ETH/USD price outlook is bullish for the cryptocurrency and a large rally may be under foot to above $364 and higher levels.

Watch the green resistance channel line for additional confirmation of the rally. A break above the green trend line suggests the downtrend wave from June 2019 is over and opens the door to the ‘X’ wave high near 250. A similar pattern is found in Bitcoin, though not as clear as Ether at the moment. 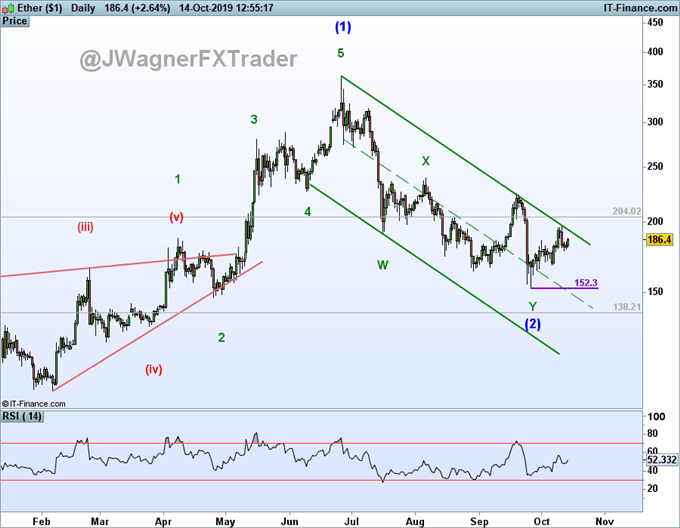 SP500 is stuck in the middle of a range and hasn’t moved much from our analysis of last week. The triangle shaped price action from May 1, 2019 is troublesome for this market. The location and size of that triangle hints towards an eventual retest of the December 2018 lows even if a pop to new highs is seen. Therefore, rallies are viewed as temporary and a break of the support trend line would become more significant. A lower low below 2777 shifts the bias to focus on the December 2018 retest of the low. 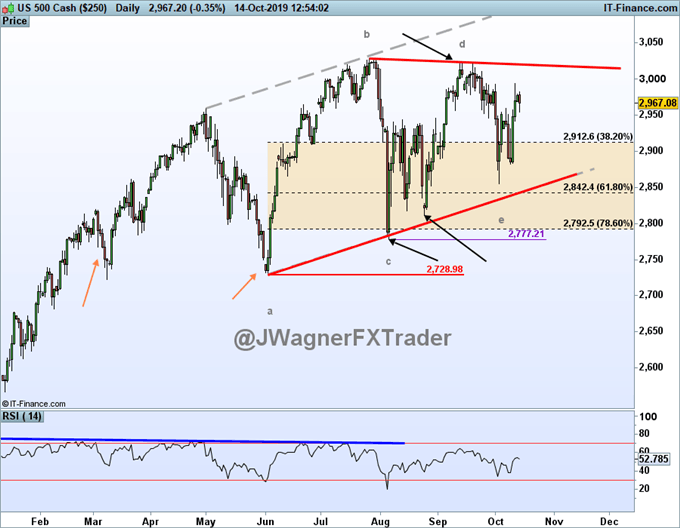