EUR/USD, silver, and S&P500 have rallied off their lows. The Elliott wave patterns provide us with key levels to watch for to determine if the trend continues higher.

The video above is a recording of a US Opening Bell webinar from October 7, 2019. We focused on the Elliott wave patterns for key markets such as US Dollar Index, EURUSD, GBPUSD, USDJPY, silver, gold, crude oil, and SP 500.

EUR/USD rallied last week, but has not materially broken the resistance levels previously identified. If you recall, last week we used Elliott wave to forecast a large rally. Ideally, we would like to see the key resistance levels broken before wading into those waters.

The Elliott wave picture for EURUSD shows a very mature trend to the downside. If new lows form, a reversal likely lurks nearby. A break above the (2)-(4) trend line begins to ease the pressure of continued lows. A rise above the B of (5) wave high near 1.1074 continues to provide evidence that a meaningful low is in place. A break above 1.1115 would show enough strength in EURUSD to consider much higher levels possible like 1.15 and 1.18. 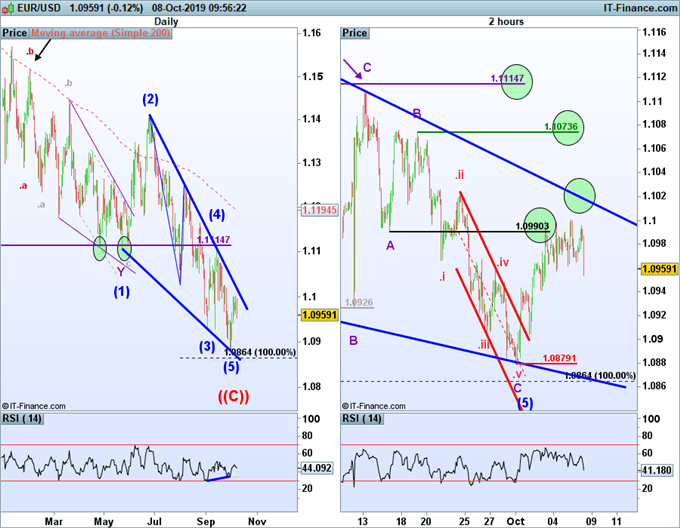 In last week’s webinar, we talked about $16.60-16.80 as being an interesting spot to watch price behavior. Silver prices subsequently fell to $16.89 on October 1. The size of the rally from October 1 does call into question the downward trend. It is difficult to determine if this trend from Sept 4 lower is waves 1-2-i-ii or simply an a-b-c zigzag pattern. If silver prices break above the blue trend channel, then we lean towards the zigzag pattern as possibly being wave ‘.A’ of a larger pattern (possibly triangle pattern). While holding below the blue resistance line, keep an open mind regarding new lows below $16.89.

Bottom line, the best days for silver’s up trend are over as the bulk of the move appears behind us.

Understanding silver as a trader’s commodity 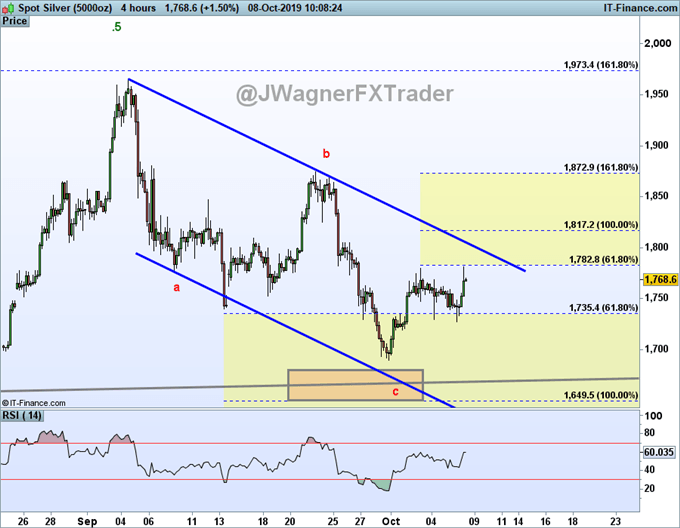 First, this could be a bullish Elliott wave triangle pattern identified with the grey labels. Under this scenario, a rally to new highs occurs to complete a zigzag pattern from the December 2018 lows. A zigzag is a corrective pattern and most of the time suggests a complete retracement. Therefore, under the triangle interpretation, a rally to new highs would be a terminal wave preceding a move back to the December 2018 lows.

A second result of the failed high on September 13, is that S&P 500 may be on the beginning stages of a retest towards the December 2018 low.

As you can see, in either scenario, a retest of the December low is higher probability. It's a question of when that retest occurs and we can use the price action to provide us clues. A break below 2,777 shifts the bias towards a nearer term retest of the lows. 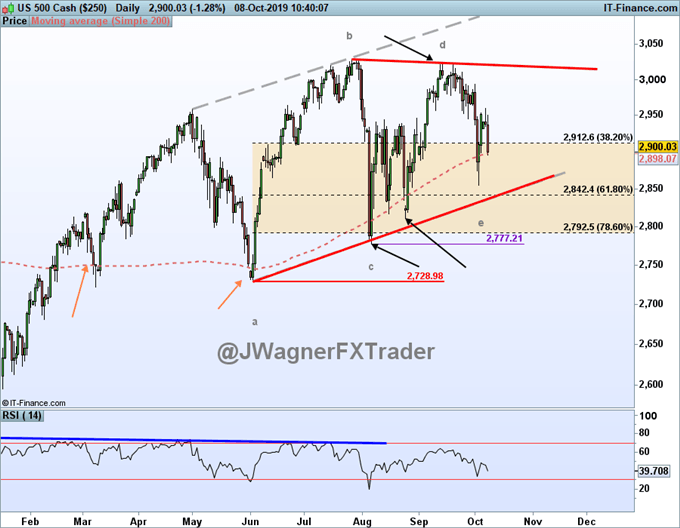