The Euro is quite weak and could trade lower with support levels breaking, but shorts still have to beware of a bounce; the French election gap could be just around the bend. Gold is rolling over and nearly completing a topping pattern around long-term resistance, the neckline of the H&S pattern lies just below. The Nasdaq 100 has a big line in the sand with the December trend-line, it’s an important technical line for the entire market.

EURUSD probing cycle lows, French election gap could be next

The Euro traded to new cycle lows yesterday, but the question is whether those lows can hold because every time EURUSD breaks down it bounces, even if only for a week or so. The French election gap from April 2017 is not far away, can the Euro finally make a momentum-move to fill it down to 10724? That may come in the week ahead, it will only have taken 2.5 years to do so. 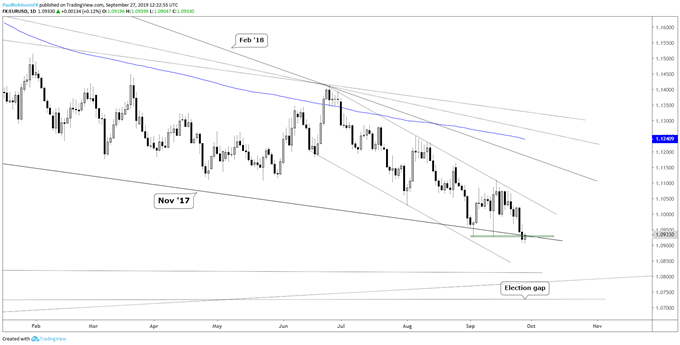 Gold price rolling over, could trigger a topping pattern soon

Gold price is rolling over hard from the levels created during the 2011/12 topping process, with real potential now to finally form out and confirm a head-and-shoulders pattern. The neckline and 1483 need to be broken before further downside, but should a decisive break occur look for the 1450/30 area to get tested. A hold of support of course keeps a bearish bias at bay for now.

The Nasdaq 100 has been flirting with a break of the December trend-line, but has maintained it on several occasions since the beginning of August. As long as the upward sloping line holds then the bias is neutral to higher. However, the trend-line makes up the bottom of a very large rising wedge pattern, that if triggered, could lead to a pretty significant decline given its size and duration. Time is running out as it nears the apex, keep an eye out in the weeks ahead for the beginning of what could be a nasty Q4 again.