The U.S. stock market appears in jeopardy of rolling over with a vengeance, with it will go other global markets. The DAX and FTSE have similar technical patterns forming, the latter the cleanest looking so far (surprisingly). Crude oil has geopolitical risks to the upside and global slowdown/risk-off concerns for the downside – which will win out?

Dow Jones could soon roll over, watch the NDX

The U.S. markets look like they could be headed for trouble, especially if the Nasdaq 100 (which is comprised of some of the world’s bull market leaders) triggers the big-picture rising wedge by breaking the December trend-line the index currently sits on.

Turning to the Dow, it has been holding up relatively well but that could quickly change. For now it appears headed towards filling the September 5 gap and testing the top of the range created during much of August. Below there the December trend-line will become a major focal point. If the Dow gets to that point that almost certain means the NDX will have triggered the rising wedge, breaking the December trend-line (and 200-day) may just become a formality.

The DAX is rolling lower from the January 2018 trend-line, breaking a loose channel. The trading bias with the breakdown is for shorts on rallies. Bigger picture the right shoulder of a head-and-shoulders (H&S) could have just been cemented.

DAX Daily Chart (turn off t-line, H&S could be in the works…)

The FTSE is trading around the 200-day, so keep an eye on how it acts in the very near-term. But looking at the broader picture, a break of the ascending wedge quite possibly is cementing the right shoulder of an H&S formation. How it reacts to the neckline and 2016 trend-line may be next in the conversation.

Crude oil in limbo, but the downside looks more at risk

Crude oil is caught in limbo between geopolitical tensions and a weakening economic/stock market backdrop. In the near-term, still looking for last week’s massive gap to get filled down to 54.83, with an eye on the trend-line off the August low. 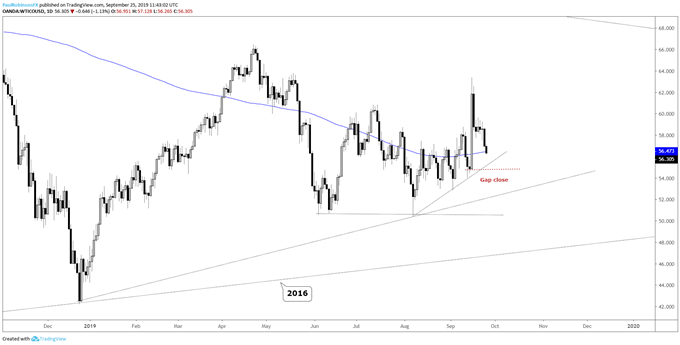