The Euro is working on trying to gather pace to the downside here, but we need to be on reversal watch as “strong” moves have been faded in recent months. GBPUSD is trading again at a critical area of long-term support and could again bounce. USDJPY has been a bit of a range-bound mystery, but with resistance ahead and the trend lower, it could offer up a look for shorts.

EURUSD could be on the verge of a momentum move

The Euro is trading a point in both price and time where it could begin to pick up momentum, or do as it has so many times since last year, stop and reverse. The underside trend-line from November 2017 is in play as support and could put in a floor here, but if it doesn’t then look for the French election gap in April 2017 at 10724 to get filled.

Tactically, taking a near-term wait-and-see approach to see if price behavior changes. Other attempts to build on weakness have been quickly reversed. If this time we see a weak bounce of sideways move, it could mean a change in character and vol breakout is underway.

GBPUSD is trading at long-term support, at risk of a bounce

GBPUSD is trading a long-term price zone created during the bottoming process in 2016/17. The zone extends down to 11904, the October 2016 flash-crash low. Currently, Cable is trying to bounce off support and could very well get a lift from here. But overall it doesn’t look promising for longs. Shorts, though, may want to be patient as well to see how a bounce from support can play out.

Last Monday, USDJPY found support around the 2018 low and January flash-crash low. The bounce brought into play resistance near 10700. Between resistance and downtrend, USDJPY is at risk of selling off further soon. If stocks turn down too, which it appears they could, then look for this to help further along a bearish bias. 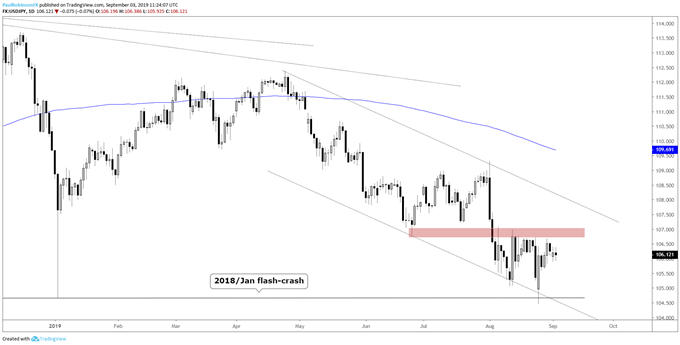