Using Elliott Wave Theory as a guide, the price charts for S&P 500 and commodities like silver and gold point to the potential of a bearish reversal.

The video above is a recording of a US Opening Bell webinar from August 19, 2019. We focused on the Elliott wave patterns for key markets such as S&P 500, Dow Jones, silver, gold, DXY and EURUSD.

The recent rally in S&P 500 has garnered attention that perhaps a meaningful low is in place. We can place an Elliott wave count for the rally to continue to new highs though that rally is likely short lived.

Looking at the daily price chart (left) we can see monster RSI divergence dating back to early 2018. This suggests the momentum higher is failing and that a deeper correction is needed to align price with a weakening RSI.

Bottom line, a small rally may ensue, but is viewed as temporary. A move above 2974 likely means new all-time highs, but the huge divergence on the Relative Strength Index oscillator is telling of a larger correction needed.

Below 2974, the rally is susceptible to being completely retraced and breaking down further possibly to 2729 and 2325. 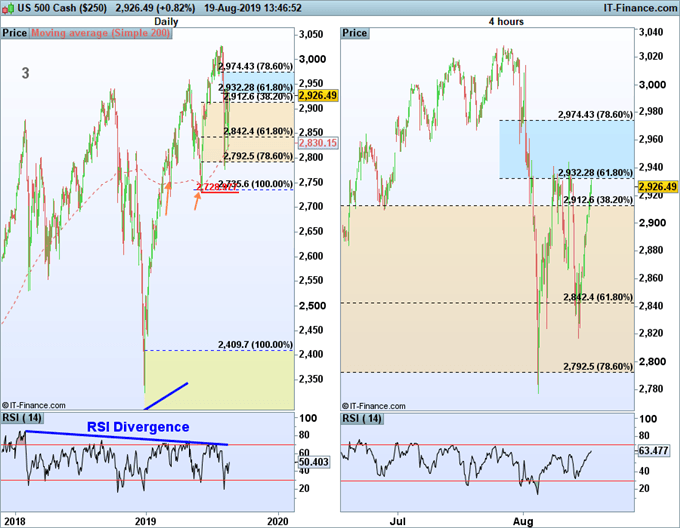 On August 5, we forecasted a target of $17.38 for silver prices. Silver did rally to $17.51 on August 13. We have enough evidence in place that the five-wave impulsive move from May 2019 is over. This evidence includes a completed 5-wave count with the fifth wave experience divergence on the RSI.

If this is the case, then multiple Elliott wave counts point to a corrective move to $15.94 which is the previous fourth wave extreme. From there, wave counts diverge with some rallying back up to new highs while others correct even further down to $14. We cannot assess the probability of either scenario, but several wave counts are pointing towards $15.94. The structure of the decline, if it takes place, will tip its hand as to whether the current correction is temporary or longer lasting. 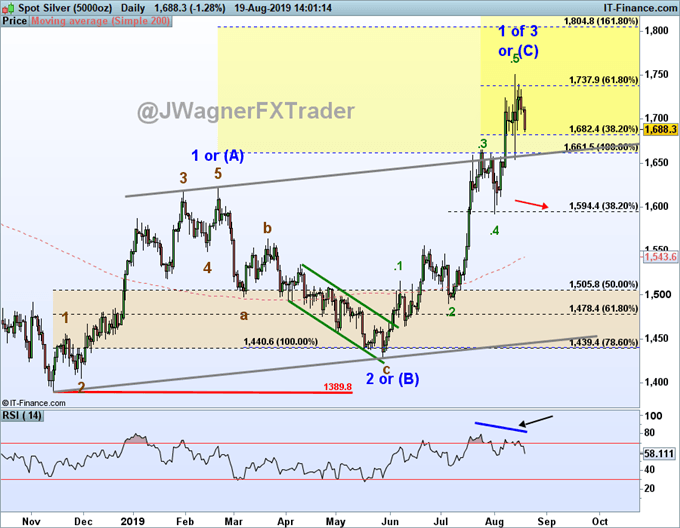 Like silver, the gold forecast is towards lower levels though the longer-term rally appears incomplete to the upside. We can count the 5-wave impulse pattern in place from the May 2019 low. Therefore, we believe this is wave A of (Y). If correct, then gold prices may correct down towards $1400 in wave B of (Y). That leaves another wave higher labeled C of (Y). This forecast is valid so long as gold prices hold above $1266. Below $1266, and a much larger correction may be at hand. 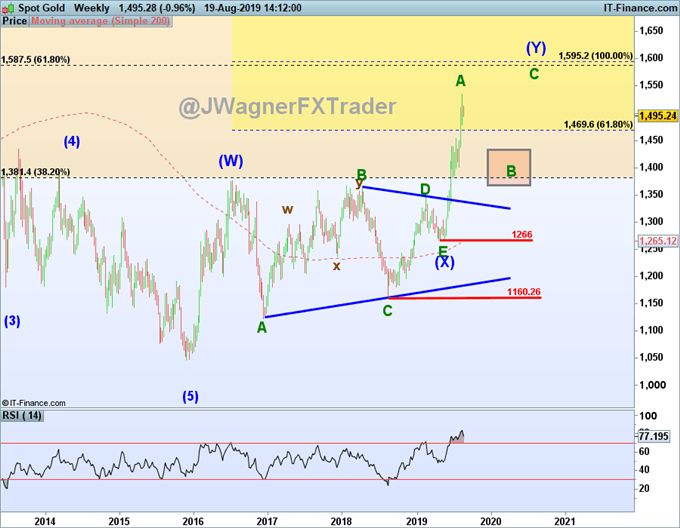