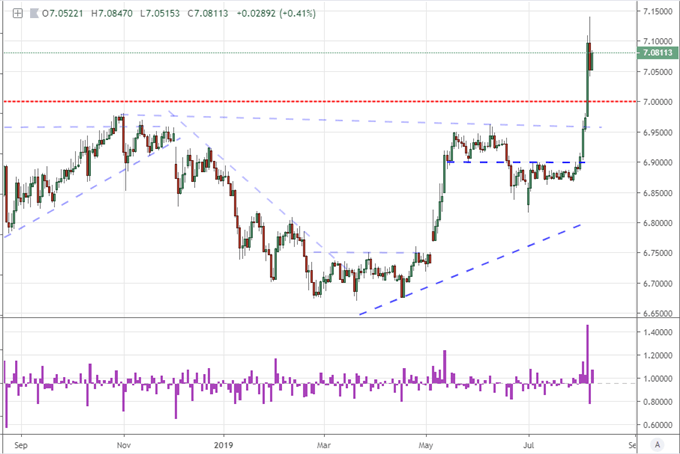 Trade Wars Aren't Constantly Escalating, But Is That 'Good News'?

There was a sense of relief across the capital markets Tuesday with US indices offering up a very prominent bounce while other trade war-sensitive assets (emerging markets, carry trade, etc) found some modest foothold of their own. This was as much the hallmark of the familiar speculative rush looking to fill in the void caused by a temporarily shell-shocked financial system as it was a genuine reflection of renewed optimism of the what lies ahead for markets and investors. The escalation of the US-China trade war over the past week is still an open-ended threat to growth and stability following the volleys between the US President's announcing a 10 percent tariff on the remaining $300 billion in Chinese imports (effectively taxing all of the country's goods) and China's response of letting the USDCNH exchange rate appreciate through the 7.0000-mark. Immediate, subsequent retaliation was expected and quickly realized with the US Treasury labeling China a 'currency manipulator' for the first time in a quarter-century while China suspended all orders for US agricultural goods.

Supposedly, the 'good news' on the day was the fact that USDCNH didn't simply continue to surge having overtaken 7.0000. If this marked the transition of control from policy-curbed price discovery to a market that is prone to rampant speculation and fear, perhaps the 'breakout' would have sent the rate rocketing further. However, this was a controlled measure by the Chinese policy authority to mount an effective response to the White House's more flexible option in tariffs. With the statement that the Yuan would not simply continue its slide, they have positioned the development as a natural market response which would suggest any further escalation from the US would result in a very 'natural' exchange rate connection - effectively rendering the United States' principal tool neutralized for the time being. This by no means suggests that conditions are improving or that new risk opportunities are arising. Quite the opposite is true. We are simply waiting on the next strategic move that reinforces the competitive nature of policy that undermines global growth more than it affords domestic strength for any individual.

With the threat of an avalanche in sentiment easing, it is natural for speculative appetite to rush in to take advantage of any temporary dislocation. After years of relentlessly bullish trend, it is natural that investors fall back on a overwhelming sense of complacency where any pullback is an opportunity 'buy the dip'. However, the derivative of Newton's third law - 'what goes up must come down' - is certainly true for capital markets where sentiment is a more important feature of pricing than inflation. Eventually, a meaningful correction will turn into a technical bear market (20 percent correction from highs) and then into a more systemic wash. We are almost certainly closer to that inevitability than we are to any unexpected, late-phase bull trends. It is that practicality of risk-reward that we should remember when pursuing aggressive exposure on pullbacks. Market participants will look to exploit familiar and profitable patterns as long as they work. Yet, when reality kicks in, the fall out is proportional to the deviation from underlying measures of value. 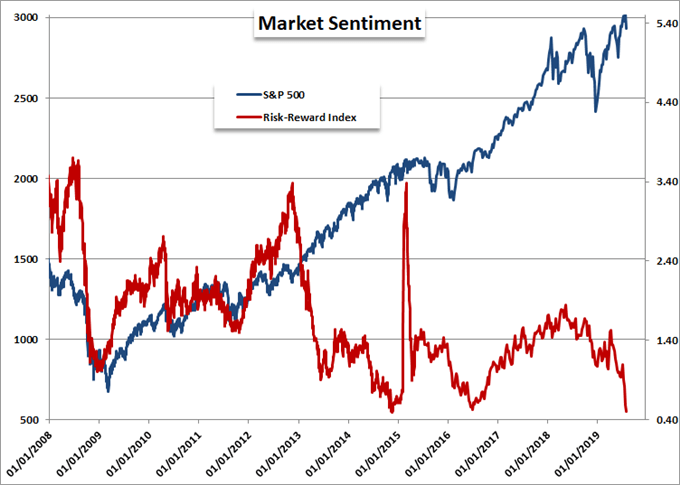 Looking at 'risk' benchmarks this past session, there was clearly a bid in the preternaturally ebullient US equity indices. That would translate into modest bullish gaps on the open Tuesday and full sessions that fit neatly within Monday's tumble - 'inside days' for those that follow traditional technical patterns. There were the ubiquitous reports of a rush in speculative capital looking to take advantage of the pullback: Bank of America for example reported $5.6 billion in shares purchases followed the tumble perhaps meant to insinuate a ready charge of demand snuff out any fear that selling pressure could overwhelm the temporary bout of opportunism. I will keep a broad overview of risk assets moving forward with a particularly finely-tuned measure of volatility. In its traditional form, volatility is a reflection of uncertainty. In more modern times, it is treated as a directional 'fear' measure. When we revert to the latter interpretation, it is easier (more convenient?) to see unfavorable winds as temporary squalls that resort to a mean of indulgent risk appetite. Already, we find risk assets diverging substantial relative to fundamental measures and even among relative benchmarks (SPX compared to VEU for example). When we further evaluate the state of uncertainty reflected in implied activity measures across various assets, we can discover circumstances where the financial system is more prone to unexpected (and even expected) fallout. 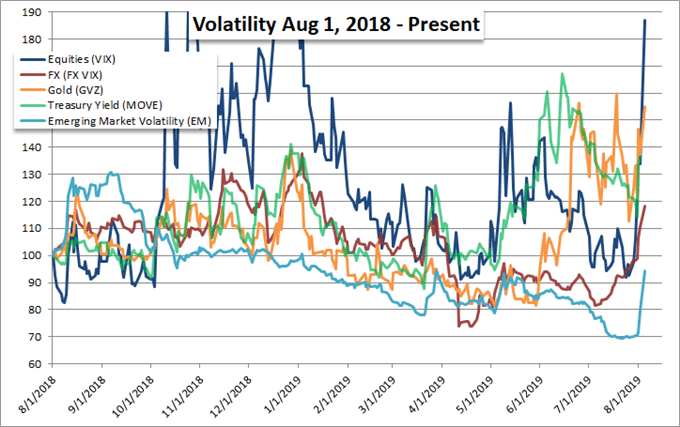 While trade wars follow a seemingly narrow fundamental corridor, their implication are quiet expansive. Growth is one such side effect. Given that the most recent escalation has only entered the mainstream consciousness this past week, we can't expect its impact to be registered in many current updates. There was perhaps some measure of influence in the Euro-area investor sentiment reading Monday, but that is not exactly indicative of the circumstances for the global markets. With July PMIs still crossing the wires and 2Q GDP readings from Japan and the UK later this week, economic health and stability will be top of mind. However, market based measures may prove more appropriate to our transitional phase. The US 10-year to 3-month Treasury yield spread inversion remains a wonky favorite of market observers - even if its timing is very different than the average traders' scale. I am more interested in the long-standing divergence between more growth dependent measures like global yields relative to imperfect favorites like the S&P 500. There are further commodities that market participants have referred to in the past. Crude oil is one of the modern favorites, but copper is an 'old hand' favorite. 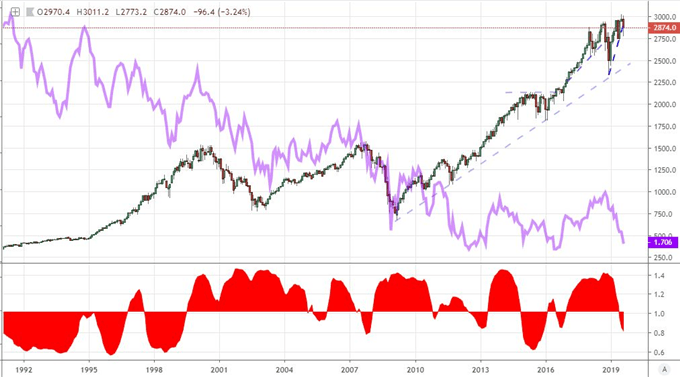 As for the other systemic influence - monetary policy - world's largest central banks have been put on alert by the market. Notably, this past session with risk trends pulling up from their nose dive, there was a nudge higher in rate cut forecasts from the the Fed. That said, the US central bank is still seen cutting its benchmark rate next month and fully engaged for a third cut sometime later in the year thereafter. Risk aversion has only solidified this perception. Meanwhile, the pressure to act is not just charged by the market. White House trade adviser Peter Navarro was speaking Tuesday with a reiterative call for the Fed to continue its easing regime to help the US economy through its trade war struggles. Meanwhile, Fed speakers post-cut have thus far supported the dovish view. Bullard went so far as to suggest short-term market corrections should not factor in and said that the group should not be 'reactionary'. Good luck risk takers. 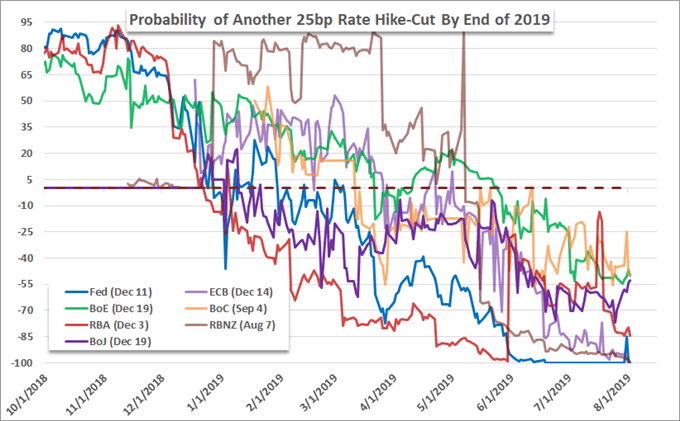 The US isn't the only country with a lock up on these systemic themes. Monetary policy in particular has been a heavy fundamental wind this past session. The Reserve Bank of Australia (RBA) kept its monetary policy bearings untouched Tuesday which seemed to fortify the Australian Dollar. At the very least, it prevented a record 13th consecutive slide from AUDUSD. That said, the 'bounce' was as far from convincing as possible. Moving forward, the probability of further cuts is high. That said the Australian Dollar already seems well adjusted to that scenario. 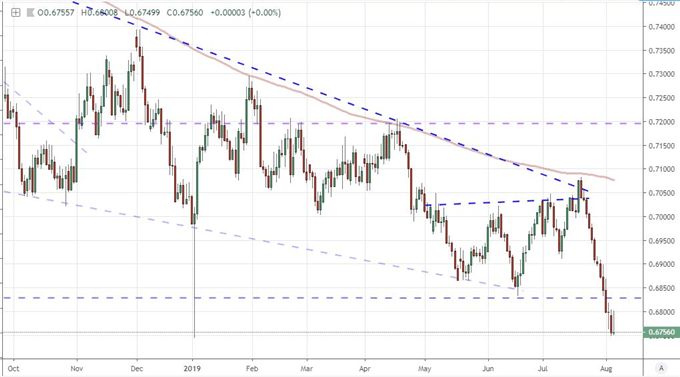 For Wednesday morning, the more pressing monetary policy theme would rest with the Reserve Bank of New Zealand, where the group is assumed to on course for rate cuts. The New Zealand Dollar has held fast against ta drop in the jobless rate through this past quarter and a retreat in inflation expectations. After two weeks of pullback for the 'Kiwi' against a number of counterparts, there is an aggressive per-positioning that can present opportunity. I a watching EURNZD for both directions, but NZDUSD, NZDUJPY and GBPNZD all come with more favorable scenarios.

Chart of EURNZD with Single-Day Rate of Change (Daily) 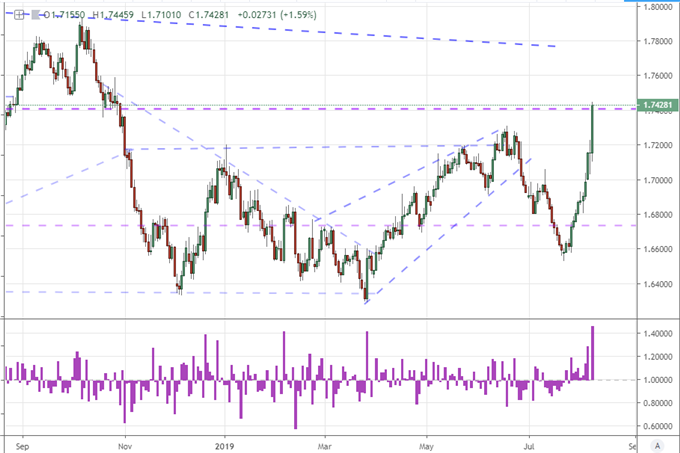 Beyond the more systemic tides, the Brexit issue continues to burden the British Pound. New Prime Minister Boris Johnson has pushed his willingness to pursue a no-deal outcome should the EU not budge in the negotiations of their divorce criteria (Brexit), but that does little to soothe fear for Sterling investors. This past session, UK Cabinet member Gove suggested the EU of not dealing in good faith with the UK while a European Community spokesperson said Johnson had no alternative to a 'no deal' outcome and that they would continue to shore up boundaries to unfavorable speculative developments globally. 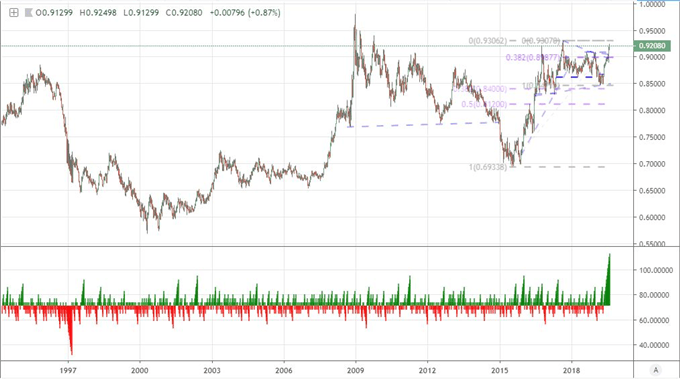