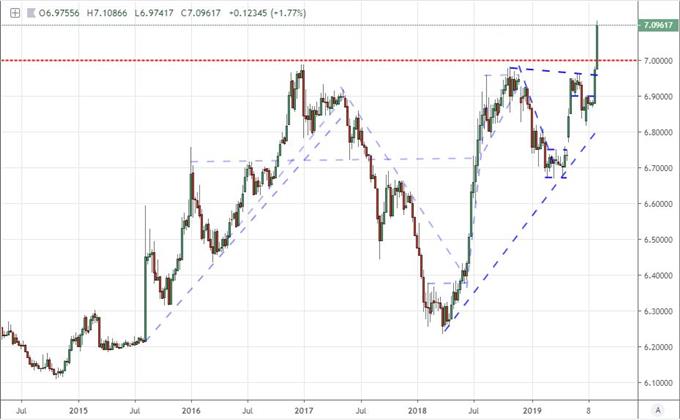 There is little doubting the top fundamental theme given the state of the global markets to open this new trading week. Trade wars was front and center Monday for its very troubling weight on global sentiment. Last week, the attention shifted deftly away from the FOMC rate decision - for which the market was heavily debating the nuance of intent for the benchmark policy maker - back to the growing discord between the world's largest economies. A Thursday tweet by US President Donald Trump announced the 'remaining' $300 billion in Chinese goods shipped to the United States would be taxed 10 percent at the border, decisively escalating the trade war and sending a ripple of concern through the global investment rank. Alone, this move would have likely carried enough fear on its own to keep risk trends rolling deeper into corrective territory as fret over the spread of panic through the financial-to-economic barrier gained explicit traction. Yet, the retaliation made the situation truly headline worthy to the average trader.

With Monday's open, USDCNH surged to overtake the previously-believe insurmountable 7.0000 level. This was clearly not an accident on the otherwise careful-PBOC's part, rather it was an aggressive move that would puts into place certain mechanizations that are self-perpetuating. China simply could not match the US in a tariff-for-tariff approach as it had already run out of US imports to match the last escalation. Allowing the Yuan to depreciate is the most direct ability to offset the economic strain that these taxes from the US render. On the other hand, it raises serious risks. Locally, steady depreciation of the Yuan can raise the concern that there is capital flight from China which can be dangerous to a country attempting to keep fine control on all the elements of the economy. Further, it would naturally be used by the Trump administration as evidence that the country is using currency manipulation to further its 'uncompetitive' trade practices. In effect, ensuring further retaliation.

There are other themes to consider through the week ahead, but they will almost all be registered in terms of how they are influenced by trade wars or how they can in turn exacerbate the economic standoff. Growth is another theme between PMIs for service sector activity for a number of countries or the Japanese and UK 2Q GDP readings, but the data looks suddenly dated if there is any positive showing or ominous for anything weaker than expected. Similarly, monetary policy is now the realm of financial crisis firefighting. The forecasts for the Fed to take more dramatic action at its next meeting have shot higher, while the RBA and RBNZ are more likely to act this week rather than wait until future months to follow a course of slow adjustments. It is perhaps easier to follow fundamentals in the week ahead, but not for the encouraging reasons. Watch the video to see the full analysis from the webinar.