Silver has rallied into a cluster of resistance while Gold’s rally is losing momentum. A small dip to correct the recent strength is considered normal in Elliott Wave Theory.

The video above is a recording of a US Opening Bell webinar from July 22, 2019. We focused on the Elliott wave patterns for key markets such as silver, gold, DXY, EURUSD and USDJPY.

Our silver price forecast is for continued gains so long as it trades above $15.94. Back on May 20 while using Elliott Wave Theory, we forecasted a meaningful bottom forming soon and an initial upside target level of $16.70. The bottom eventually formed on May 28 and silver prices reached $16.59 last week.

The recent rise for silver prices has been quick and large, but silver continues to trade well below its all-time high of $50.35 per ounce recorded intraday in January 1980.

The wave structure of the recent up trend has us contemplating a couple options. The current rise has pitted silver prices against an equal wave channel. Therefore, some type of reaction lower would be normal. So long as silver holds above $15.94, then we will focus on the option that calls for continued strength up towards $18 per ounce. Under this scenario, the current Elliott wave as .3 of 3.

A move below $15.94 does not eliminate higher pricing eventually, but merely opens the door for more bearish scenarios. Though not anticipated, should silver prices fall below $15.94, then we will consider those bearish options more heavily. 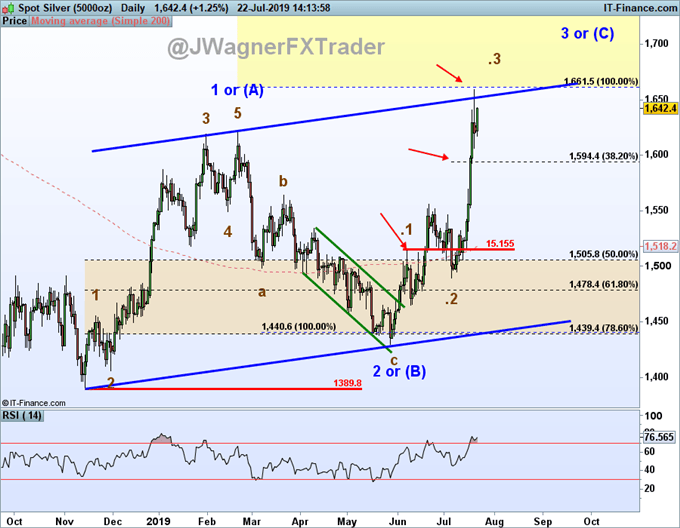 Gold prices have zoomed to their highest level since 2013. Though the recent rise has been aggressive, we can count this Elliott wave pattern as incomplete to the upside. Some wave relationships exist nearby at $1470 which may provide some temporary resistance. A dip back towards $1340-$1400 would be viewed as a favorable development, especially if the waves lower are sloppy and overlapping. Sloppy and overlapping waves are indicative of corrective waves which then implies future up trend.

Should gold prices be supported, there is a grouping of wave relationships just below $1600 per ounce. A meaningful break above $1470 opens the door to consider $1600 as a viable target.

Therefore, we are considering the current Elliott wave to be near the end of wave A of (Y)…both are bullish waves. When wave A terminates, look for wave B of (Y) to be a partial retracement lower followed by wave C of (Y) higher. This gold forecast remains valid so long as gold trades above $1266. 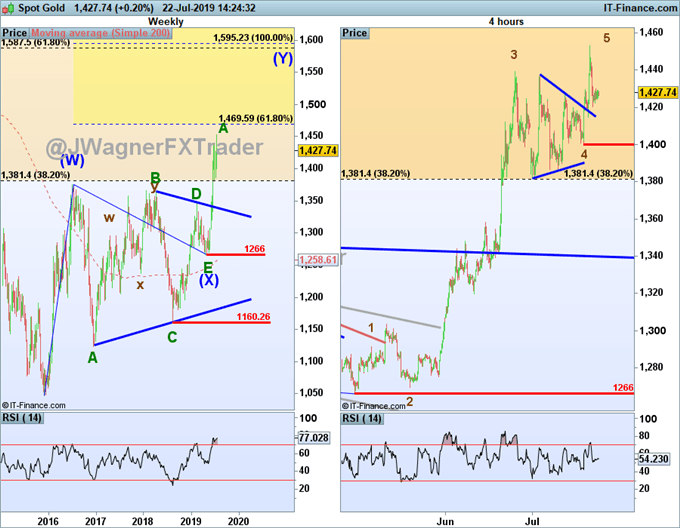 EURUSD sports an impulsive wave that may lead to new low

The EURUSD Elliott wave pattern has been a mess for most of 2019. The sloppy sideways price action has made it difficult to ascertain the wave picture. However, the price action for the past couple weeks has opened an opportunity for bears.

On an intraday chart, we can identify a bearish impulse in the making. As a result of this bearish impulse, EURUSD may work itself down into the 1.10 handle clearing the previous support formed in 2019. This EURUSD forecast is valid so long as prices remain below 1.1412. 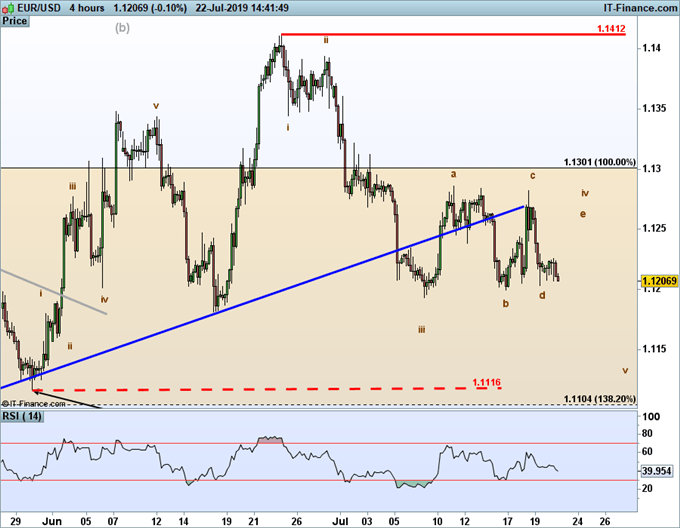