See how retail traders are positioning in GBPUSD, EURGBP, GBPJPY and other liquid FX crossesusing the DailyFX speculative positioning data on the sentiment page.

Among a few, strong FX moves this past session, the Sterling's drop was contributing to one of the most remarkable overall performances we have seen among the majors in some time. The Pound tumbled across the market Tuesday and would ultimately drop to its lowest level on an equally-weighted basis (against the majors) since September 2017. Among its more recognizable pairings, the benchmark GBPUSD dropped back below 1.2500 helped along by the Dollar's unusual climb through the session. 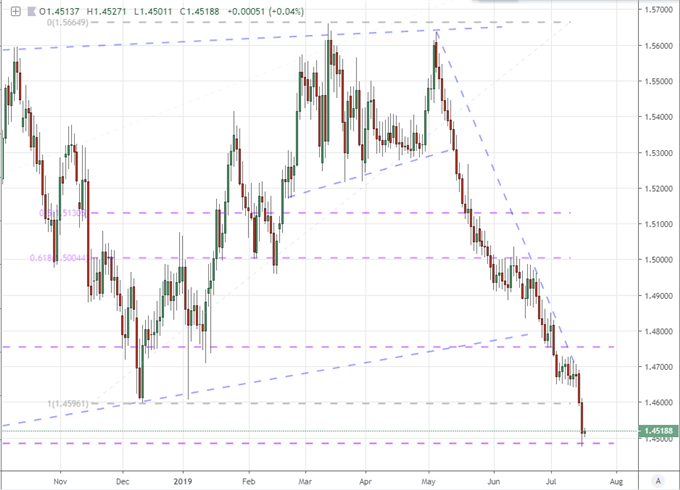 It is hard to discern what is more remarkable about the Sterling's weakness: technicals or fundamentals. While the five week drop from the equally-weighted GBP measure matches the worst stretch going back to the flash crash low back in November 2016, certain pairs like the EURGBP are driving a more exceptional move with a record-breaking 11 consecutive week advance through Friday. Nevertheless, confidence should depend as much on the fundamentals as the mere chart patterns. There was some event risk that would seem to support a bearish view - UK unemployment claims were weightier than expected with 38,000 jobs shed; but that is not where the market's top concerns rest. The true fear is in Brexit uncertainty, which is still more thoroughly anticipation than realized influence. The new leader of the conservative party is due to be announced on July 23rd, and then we will dive into the PM designate's comfort in dealing with a 'no deal' outcome. 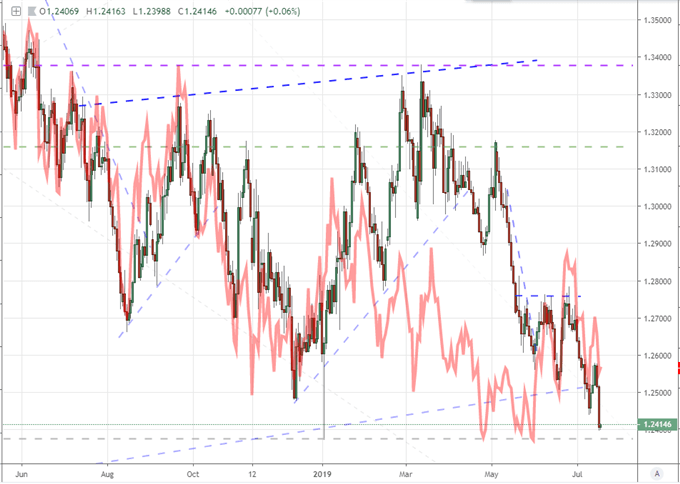 My Perspective On the Pound's Tradability

For those that are comfortable sitting with a trend through weeks of chop, the Sterling has worked out well on the short side. However, few traders are comfortable pushing for a trend in a market that seems to seriously lack for productive charges regardless of the region or asset class. To overcome an inherent conditional restraint on the market like stunted trends, a reliable and overwhelming fundamental charge is the best motivation. That said, the Pound seems to lack for that overt catalyst as readily as most other markets do. Brexit is the most pressing theme when it comes to the GBP, but there is a very overt lack of progress on this UK-EU divorce until key milestones set out into the future are met. The next Tory leader will be announced on the 23rd and only then will we find a clear mandate from the government on what the UK government's strategy will look like. While risks are growing, it is unusual to see markets run on sentiment alone. I remain skeptical of this progress - not direction, just traction.

Whether someone intends to trade the Pound or not, there are a host of key crosses to consider. GBPUSD is certainly a must-watch given it is the most liquid pair in the Sterling's ecosystem. Until the Dollar put in for its own aggressive rally this past session, this pair proved to be one of the more restrained landslides. Competing fundamental themes can speak show just how motivated the Sterling's bearish bearing may be, but this could also prove one of the few pairs where its weakness is not fully stretched.

EURGBP is perhaps one of the most battered Sterling crosses in the mix, which is astounding given both the Euro and Pound on are on the hook for the Brexit. Nevertheless, the cross is advancing for an 11th straight week as it took out further important resistance this past week. A close relative, GBPCHF finds the Swiss Franc often treated as proxy for the Euro; but in fact, it is a less active currency on its own. That makes it far more useful as a foundation to the Pound's own movements. 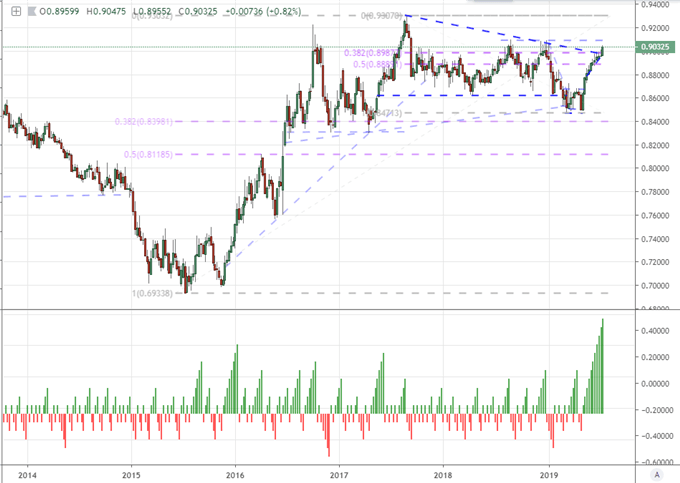 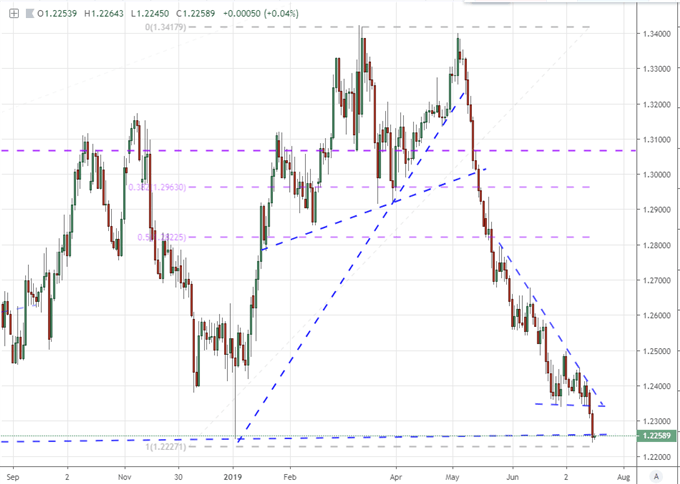