US Dollar Weakness May Fuel Gold and EURUSD Gains

US Dollar hovers near a nine-month support line. A review of the Elliott wave charts shows a break below the support line may drive gold, EURUSD, and GBPUSD higher.

The video above is a recording of a US Opening Bell webinar from July 1, 2019. We focused on the Elliott wave patterns for key markets such as gold, silver, DXY, EURUSD, GBPUSD, USDJPY, and crude oil.

US Dollar Elliott Wave Pattern Suggests a Top is in

The US Dollar has been toying with a nine-month trend line. We can count the minimum waves in place for an (A)-(B)-(C) Elliott wave zigzag pattern beginning in February 2018. This proposed zigzag has corrected a Fibonacci 61.8% of the 2017 down trend. If this is correct, then we suspect this trend line is about to break.

Should this trend line break, the next layer of support comes in near 92-94. From there, the wave counts diverge with some suggesting a run at new highs near 100 while others hint towards deeper weakness into the low 80’s. We will watch the structure of any correction to tip our hands and provide clues as to which is the higher probability path. 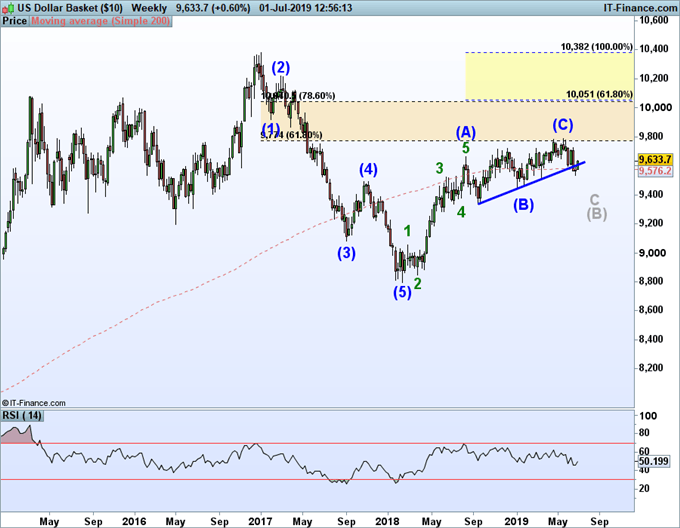 Gold’s break of $1365 suggests the three-year Elliott wave triangle pattern ended in May 2019. Since triangles appear in the wave prior to an ending wave, this means the current move higher is a terminal wave. Though we suspect there is more upside potential, when this uptrend exhausts, it would place the finishing touches on the entire upward correction that began December 2015.

Some initial targets of this move higher appear near $1469 and near $1600. Gold does not have to rally this far to satisfy the Elliott wave count as the current rally is considered an upward correction. However, adjacent and alternating waves tend to have Fibonacci price relationships with one another so these upward zones help keep us grounded as to the rally’s potential. 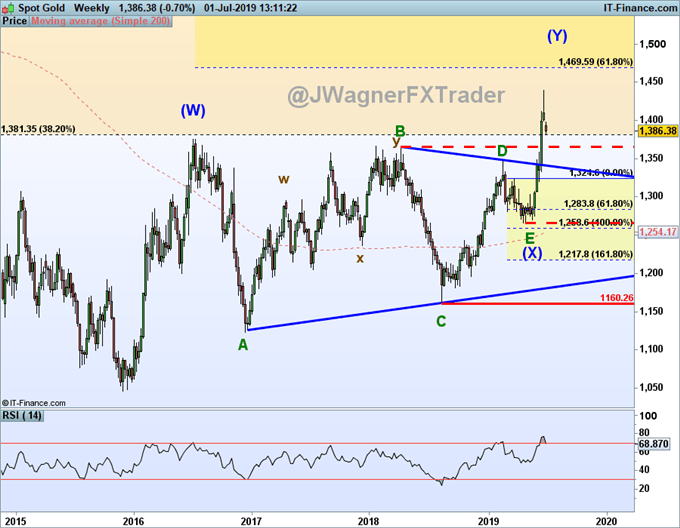 The softness in US Dollar Index has produced strength in EURUSD. However, this strength has yet to break above the key 1.1448 level. Above 1.1448 we can eliminate an alternate count that immediately calls for another dip to new lows. Additionally, above 1.1448 builds the case that a significant low is in place for EUR/USD and that it may rally to 1.18 and possibly higher levels. 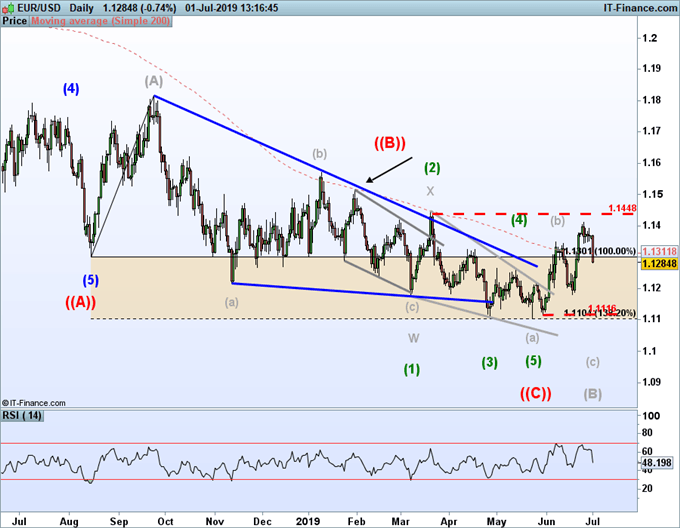