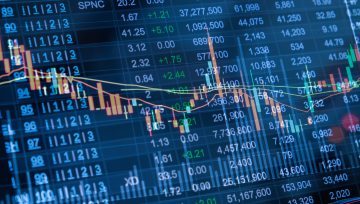 Global stocks ramped up yesterday, taking U.S. indices back to near record highs; how will they react upon a revisit? The DAX was especially impressive on the heels of Draghi’s dovish comments, could soon see new yearly highs. Crude oil was showing weak price action over the past couple of weeks, but buyers surged in to take it off the floor for now; but will it last, though?

The Dow Jones is trading towards its record high, but has resistance standing in its way. There is a trend-line running down off last year’s record levels along with the high of the year. This makes the zone of ~26600/700 a big one. If hurdled, then 26951 could quickly come into play. Watch how price reacts at resistance in the days ahead.

A strong reversal lower may offer up an opportunity for shorts to jump in and bank on weakness, but it will be prudent to be patient as a breakout could also develop in-line with recent momentum. Buying into an extended up-move, however, with levels close by isn’t appealing, putting the idea of establishing fresh longs on the backburner.

The German benchmark shot higher yesterday on Dovish comments by ECB president Mario Draghi. This has the gap-fill from the May 6 breakaway gap in focus up to 12412, with that also as the closing high print for the year as well. Just as the case is with other major indices we will want to pay close attention to the price action at loftier levels; make or reject? 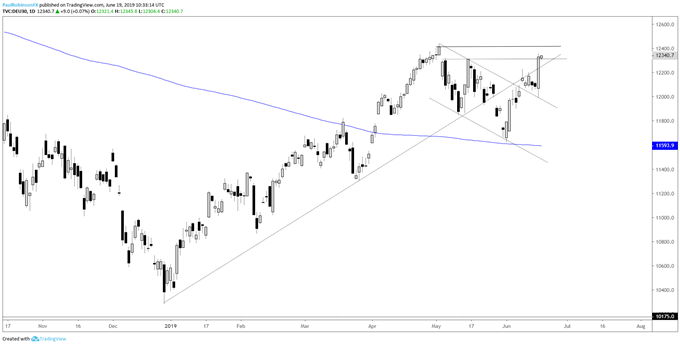 Is pop in crude oil sustainable?

Crude oil popped hard yesterday, with the WTI and Brent contracts rallying by 4% and 2%, respectively. Oil has been lagging stocks by a wide margin lately, which brings into question whether this was a one-off squeeze or a turn in the trend.

If WTI struggles from here up to 54.76 and ultimately turns back towards recent lows under 51, then a consolidation could come into play that eventually leads price lower on a break of 50.54. A rectangle pattern and break could be the best next set-up here.

As we looked at on Monday, Brent crude was forming a descending wedge, and still could be, just of a slightly larger size. It will need to turn down from around here to do-so, but a scenario still on the table. It would make for a tantalizing set-up as these patterns amidst downtrends can be robust. A break of 60.28 will eventually be needed to propel this idea into the spotlight.