US Dollar Bounces at Support While Gold Prices Stuck Below Resistance

US Dollar bounces at nine-month support line. Gold price Elliott wave outlook is towards lower levels on the inability to break through resistance.

The video above is a recording of a US Opening Bell webinar from June 17, 2019. We focused on the Elliott wave patterns for key markets such as EURUSD, DXY, GBPUSD, USDJPY, USDCAD, gold, silver, and crude oil.

US Dollar Pattern Looks like a Top is in, but has not broken support

The US Dollar has made little progress through the current calendar year. Looking backward, the impulsive bear wave in 2017 suggests a partial correction to the upside in a three-wave structure is highly likely. We can count the minimum waves in place for an (A)-(B)-(C) Elliott wave zigzag pattern beginning in February 2018. This proposed zigzag has corrected a Fibonacci 61.8% of the 2017 down trend. If the top is in, then a break of the blue trend line will be a large signal towards lower pricing.

After a break of the trend line, several wave counts suggest continued weakness to 92-94. From there, the wave counts diverge with some suggesting a run at new highs while others hint towards deeper weakness into the low 80’s. We will watch the structure of any correction to tip our hands and provide clues as to which is the higher probability path. 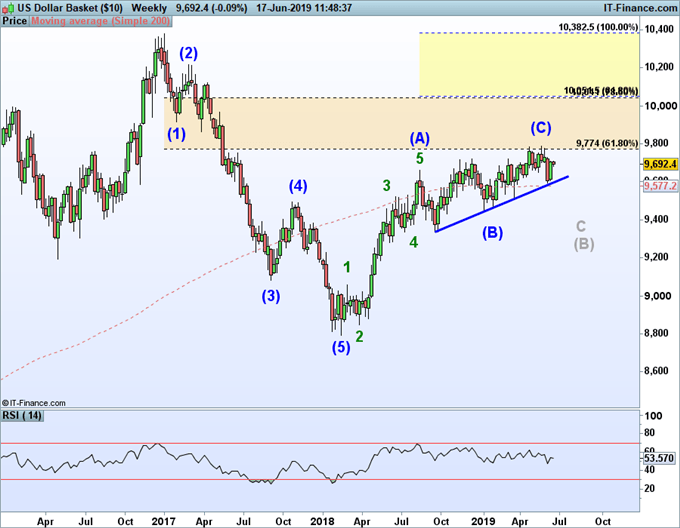 Last week, discussed how gold prices challenge resistance and that if $1365 were to hold, the door is open for a retest below $1265.

On Friday, gold price did challenge the high making it to $1358 before retreating. Last week’s challenge came with divergence on the Relative Strength Index oscillator. These are bearish symptoms for gold and suggests Friday’s high at $1358 might be wave ‘D’ of an Elliott wave triangle pattern that began in July 2016. If correct, then gold prices are poised to fall below $1265 in the ‘E’ leg, or final leg of the triangle.

An important point to keep in mind is that a correction would be the final leg of a multi-year triangle. In other words, this is a BIG pattern. Therefore, emotions tend to run high as traders try to hold on to old and tiring trends. Keep your focus on the larger pattern at play as the better trading opportunities with better risk to reward ratios appear once the large patterns end.

Bottom line, so long as gold prices remain below $1365, anticipate a retest and temporary break below $1265 to finalize the 3-year triangle pattern. If gold breaks above $1365, then we need to reconsider the triangle pattern already over and that gold may be advancing deep into the $1400’s and possibly $1500’s. 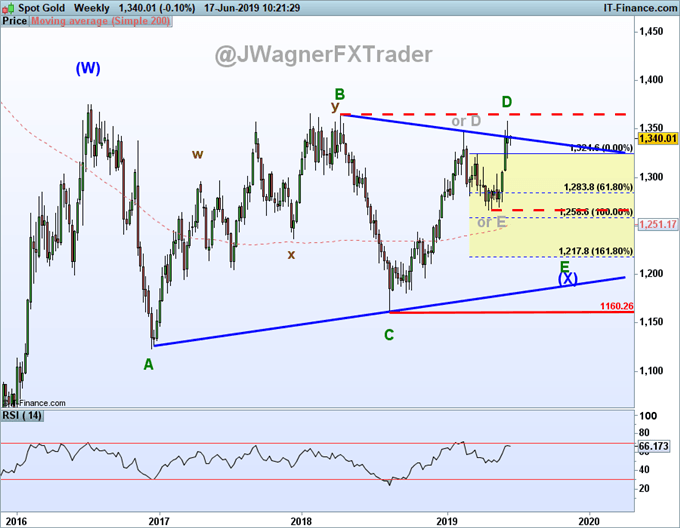