The U.S. stock market, depending on the index, is at or near record highs, will the Dow breakout or shake-out? The DAX is trading up against a trend-line off the record high, puts it at a bit of risk of pulling back. Crude oil broke out of a base and continues to look bullish, but price is getting extended here and caution is warranted for longs (not yet looking like a short, though). Gold is trying to hold an important trend-line, make or break is the question.

U.S. stocks have been quite strong, with the Nasdaq 100 leading to record highs the past few sessions and the S&P 500 and Dow lagging just behind. There is a wedge continuing to develop as price in the Dow moves towards the old record, which suggests a strong move could be on its way.

The underside of the pattern is also the trend-line off the December low, so as long as that holds so does a bullish bias despite record highs as a significant level of resistance. If the Nasdaq 100 is any indication then we might not see much hesitation out of the Dow, or S&P for that matter when crossing over into new record territory.

A sharp slash below the trend-line will be needed at this time to turn the picture bearish, otherwise a new record seems the likely scenario just ahead.

Check out the Q2 Equities Forecast for the intermediate-term fundamental and technical outlook.

If the U.S. markets forge on to a new record it will be interesting to see how the DAX treats the trend-line off the record high. One has to think it will break above in sympathy, but if we do see some type of lag out of the German benchmark then it could strengthen the case later for turning to it as a short. For now, respecting resistance until broken. 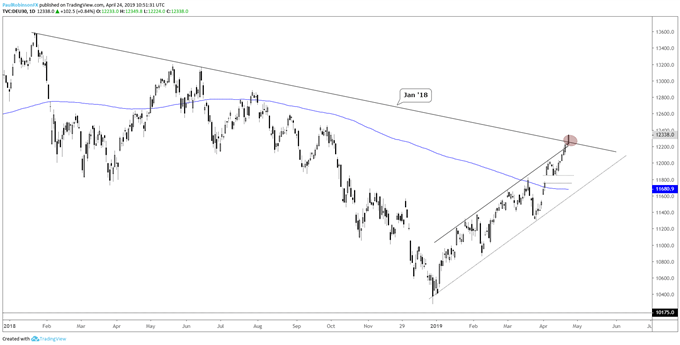 On Monday, crude oil shot out of a basing pattern with the help of some Iran news and this has higher prices still in store. It’s becoming extended and caution is warranted for longs, but this doesn’t mean that it’s time to short. Watch how some resistance in the 67s is handled. Generally speaking, there are a few upward sloping lines (see chart) which are keeping the overall bias pointed higher. Until those are broken the trend is up.

Check out the Q2 Crude Oil Forecast for the intermediate-term fundamental and technical outlook.

Gold is sitting on holding trend-line support for now

Gold, as discussed in detail earlier, is trying to hold the trend-line from August. It’s an important threshold after the descending wedge was broken. For now, giving it the benefit of the doubt, but a break could quickly bring into play the 200-day MA at 1251.

Check out the Q2 Gold Forecast for the intermediate-term fundamental and technical outlook.