Gold is setting itself up for short-term weakness at the least, bigger picture problems may soon arise too. Crude oil is grinding higher after breaking out of a triangle formation, watch how nearing resistance is treated should it test it. U.S. markets have been levitating, but the Dow Jones has been lagging and faltering around a key area of resistance; may see some weakness here but perhaps only short-lived.

Check out our trading forecasts and educational resources on the DailyFX Trading Guides page.

Gold is looking vulnerable here to a sell-off

Yesterday, gold attempted to trade above the March 13 high at 1311 but failed and is now pressing down on a rising short-term trend-line. Overall, price action since bottoming a couple of weeks back has smacked of corrective of the decline off the February high, which suggests we will soon see lower prices.

Weakness below 1300 will bring support under pressure at 1293, followed by a move to the neckline of a head-and-shoulders pattern under development since the beginning of the year. One step at a time, though, first focusing on a move down to support and then from there see if the larger pattern can trigger a more meaningful decline.

Since breaking out of a nicely formed triangle, crude oil has been grinding its way higher as volatility drops sharply. The benefit of the doubt remains to the top-side, but there is resistance not too far away for WTI at the upper parallel of the channel in place since early January. It’s not viewed as the strongest form of resistance given it is running in the direction of the trend, but nevertheless may help put a small dent in the rally should the upper-bounds of the structure get met.

Dow Jones may pull back here, but likely short-lived

The rally in the U.S. has been mostly impressive thus far, with the S&P 500 having cleared yet another hurdle in the vicinity of 2800/17. However, the Dow Jones, largely due to Boeing (BA), is lagging behind while the Nasdaq 100 remains the bright spot. This is somewhat concerning for the market.

A pullback looks to be underway or nearing, and with the Dow lagging behind it is considered most vulnerable to selling. Should the broader S&P 500 drop off a bit but hold its old resistance as support look for the Nasdaq 100 to continue to be the leader. If the overall market is to continue higher then the Dow is likely to trade above resistance in the 26110/277-area after any kind of weakness it may experience in the very near-term. 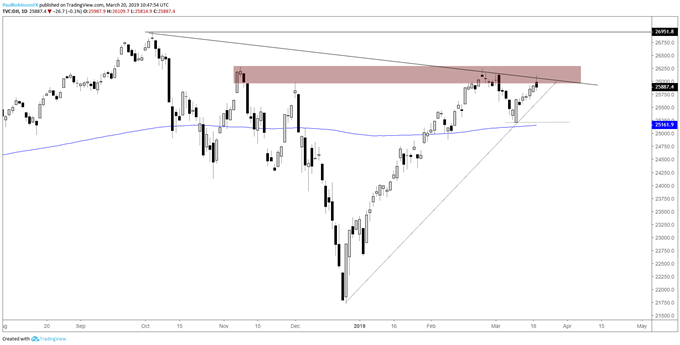