Monday’s strong turnabout in the Dow after breaking below key support has it stabilized for now and looking like it may be able to stave off selling as the year quickly draws towards its conclusion. U.S. stocks holding a low will be a near-term positive for global stocks, even the DAX which has been extremely weak may find a little life here. Gold continues to be a rough spot for traders as volatility remains low, and by comparison to the indices, extremely low. It’s sitting on support, but confidence is waning that it will hold. Crude oil continues to be a chop-fest as the precipitous decline continues to get digested; looking for more of the same. Copper is continuing to build a triangle which is quickly nearing its apex and should break at some point relatively soon.

Monday’s big reversal from below support has the Dow staying afloat and maybe better so long as this week’s low holds. A bounce is really all that is expected with resistance arriving at the 200-day around 21k, then the trend-line off the record high, followed by what is seen as a best-case scenario of challenging the Nov/Dec highs.

The DAX broke below the 2011 trend-line last week and furthered along the bearish bias created by the long-term head-and-shoulders pattern. But in the short-term with the U.S. looking to stabilize we may see some corrective price action in the next couple of weeks, keeping the market from sinking any lower for now. 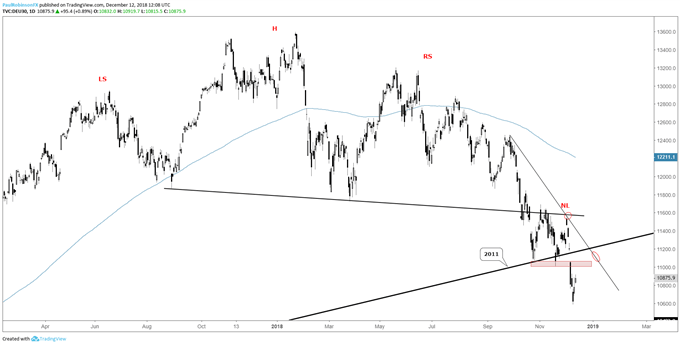 Gold price is on support, confidence waning that it holds

Gold is hanging out right around the 1243 level it broke above last week, but confidence is beginning to wane that it won’t retrace back below. On further strength there is a little more room to run higher before the 200-day at 1255 is met and the top-side parallel of a developing intermediate-term bear-flag. Overall, gold has been a market I’ve generally wanted to avoid in favor of the more volatile indices. At some point volatility will return to gold, but until then we will have to be patient and take what it gives us.

Copper triangle setting it up for a move, but which way?

Copper isn’t a market I discuss often, however; with a triangle moving towards its apex it could become an explosive situation. This one may have to wait until January before making its move, but worth keeping on the radar.