SP 500 broke the October low which opens the door for a much deeper correction. DXY and Ether consolidate and consider reversals.

The video above is a recording of a US Opening Bell webinar from December 10, 2018. We focused on the Elliott Wave and patterns for key markets such as SP 500, NASDAQ, DXY, EURUSD, USDJPY, NZDUSD, AUDUSD, Ether, Gold, crude oil, and Natural Gas.

A couple of week’s ago, we noted wrote how S&P 500 pattern walks the ledge and it was possible a large correction may take place.

S&P 500 starts this week the way it finished last week, trading on its heels. The Elliott wave patterns we are following are bearish. A break down below the October 29 low of 2604 is critical to the bulls and that break occurred earlier today. As a result of the break, the door is wide open for new lows not seen in over a year. You see, the October low is near the 78.6% retracement level of the April to October 2018 up trend. The 78.6% retracement level is considered the retracement of last resort. If this level doesn’t hold, then new lows below 2550 are highly likely.

This is where S&P500 gets interesting. A breakdown below 2550 also pops the market below the (2)-(4) Elliott wave trend channel line. This is significant because it implies the uptrend from 2009 to now is over and a DEEP correction is underway.

We know from our Elliott wave studies that when a five-wave impulse terminates, the previous fourth wave acts like a magnet, initially. The wave (4) extreme for S&P 500 arrives near 1800…32% below current levels. SMART Index doesn’t paint a rosy picture either.

So, for now, we are keenly watching the price action around 2604 and 2550 levels and a break below has a large corrective implication. There is a bullish pattern we are watching but S&P 500 would need to begin rallying hard and immediately for it to remain alive. 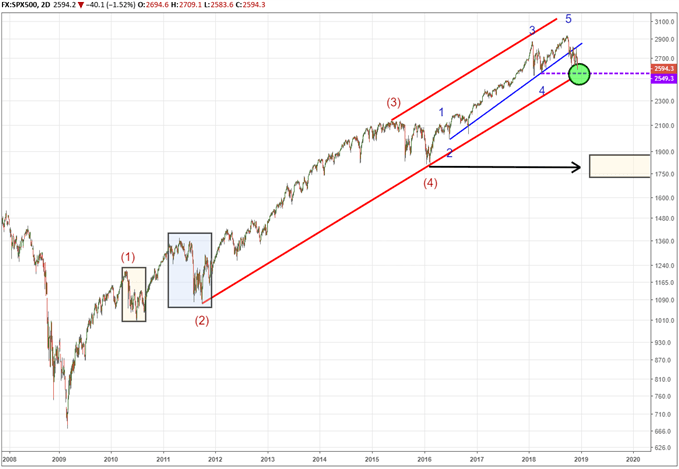 US Dollar Index Structure from 97.70 leaves it vulnerable for a retest

The US Dollar Index price pattern from the 97.70 high to the November 20 low appears to be an Elliott wave zigzag pattern. This pattern implies a strong potential for a retest to the 97.70 high. We are not expecting the retest and break of 97.70 to be long lasting. We believe the 97.70 retest is nearing the end of a large complex upward correction. Once this upward correction is indeed finished, we eventually look for a move back towards 91-93.

Therefore, it appears DXY is in a wave y of (b) that is quite mature and near an ending point.

From nearby levels, it appears as though Ether may try to form a base of support to initiate a rally. The recent price action shows RSI divergence running into the recent lows. The RSI divergence does not mean Ether has to rally, but simply warns the downside momentum is slowing.

The two main wave counts we are favoring is a completed zigzag or wave three of a bearish impulse. Under both scenarios, Ether’s price is forecasted to see a large rally to develop that may drive up towards 225. Keep an eye on other cryptocurrencies and look for rallies in unison as confirmation. 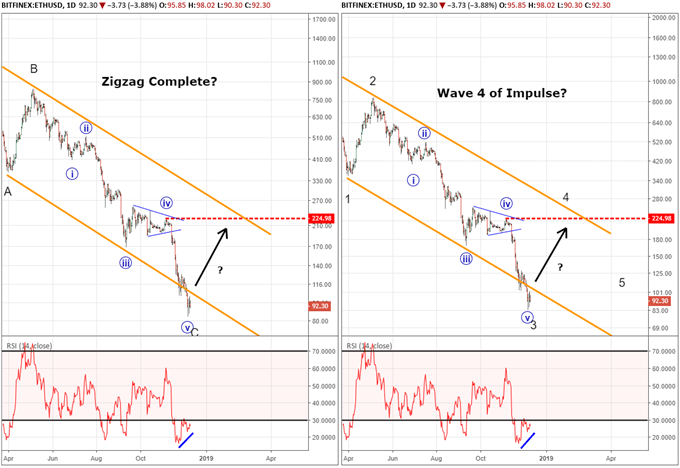 Natural Gas prices have been consolidating their large gains for the past month. This consolidation appears like an Elliott wave triangle pattern. It appears this triangle may be over or nearly so and that Natural Gas may pop higher. So long as 3.999 holds, look for Natural Gas to blow off higher above 4.90 possibly carrying up to 5.20 or higher. 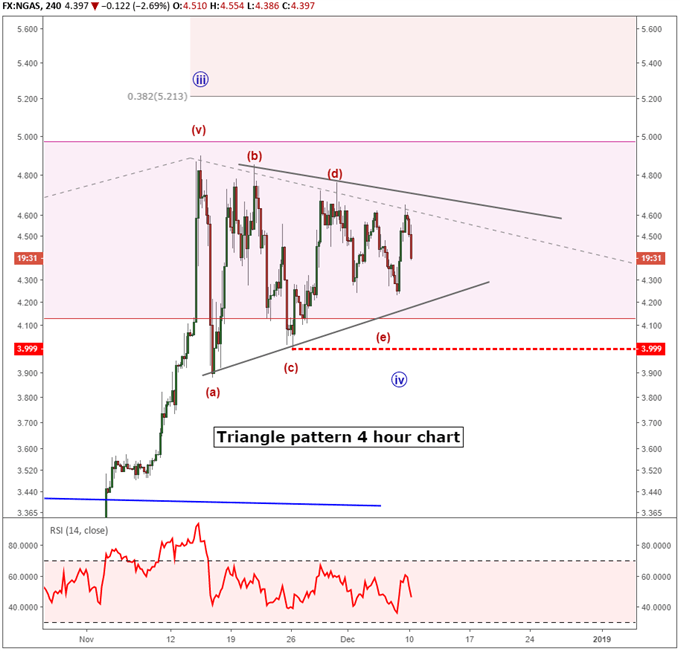