Rate Forecasts Cooling for Fed, BOC and Others Can Sink Sentiment as Well

Following on the Fed's Subtle Shift, Overt Views from the BOC and RBA

Over the past couple of weeks there has been a discernable shift in the perspective of global monetary policy. And, that has serious implications for speculating on exchange rates and a critical influence over global risk trends. A dovish change in very nascent hawkish policy for the world's largest central banks started in earnest just this past week. The developed world's most hawkish central bank, the Federal Reserve (Fed), made for an exceptionally subtle shift in course when Chair Jerome Powell used a scheduled speech to offer up a nuanced change in rhetoric and forecast that spoke volumes for this comparatively aggressive policy group. Running at a remarkably consistent pace, the market has took the Fed's efforts at forward guidance at face value and priced in the forecast the group offered up in its forecasts via the Summary of Economic Projections (SEP). Yet, whether reacting to action or forewarning, a speculatively engaged market will act with change. So, when Powell made subtle changes to its forecasts to suggest the group was closer to its peak than perhaps the market had afforded, there was a speculative retrenchment. Moving ahead to this week, a hawkish future was dealt another blow by the Bank of Canada's (BOC) and Reserve Bank of Australia's (RBA) updates. The RBA was not expected to offer up any change at all, but its concerns for the future were registered in context as a push forward for the first eventual rate hike to 2020 or beyond. So much for this being an appealing carry currency. As for the BOC decision this past session, the group's neutral range was held unchanged but concerns over oil exports and tempered GDP likely signal a deflated pace of tightening moving forward. 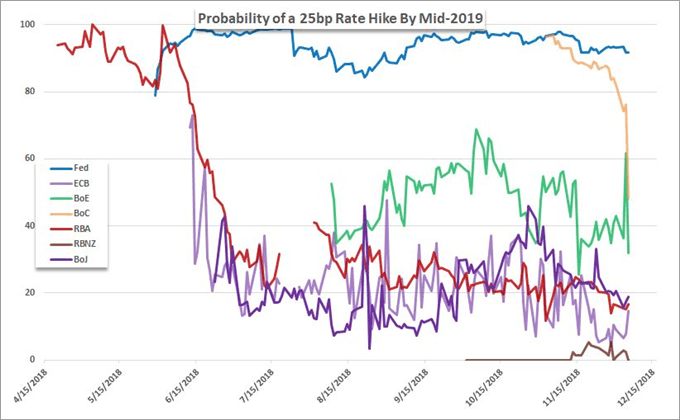 How to Gauge the Premium Each Currency Has at Risk

If we were to evaluate currencies on the basis of their monetary policy, there would be a number of ways that we could assess strength or weakness. A simplistic evaluation is to assign a currency that has been particularly hawkish versus its major counterparts 'more to lose'. That would put the US Dollar at the top of the list for possible losses moving forward. Yet, would the bleeding begin with an earlier plateau in the rate hike regime, the start of actual cuts or not until its benchmark rate (range) closes in on the low levels of its major counterparts? If we look at the Dollar's actual performance since its first rate hike in December 2015, we find that the currency has not advanced steadily through that period - far from it. In particular, 2017 was a year of steady decline for the Greenback when only the BOC and Bank of England (BOE) made any moves - and significantly less than the US central bank's three quarter-point hikes. There are different elements to this equation that should be considered when evaluating strength or weakness. Recency and the degree that policy changes have been priced in are arguably more important to speculative response to changes. The Fed's policy is somewhat mature in comparison to most counterparts and forward guidance has baked much of the effort in. The Dollar still has premium to lose if the Fed eases back, but it may be significant less buoyancy than many are accounting for. Meanwhile, the BOE finds itself in a position such that it could actually hike rates and the Pound may not rally - as inflation is a byproduct of Brexit which is a greater risk. The RBA and RBNZ (Reserve Bank of New Zealand) have seen significant rally of late, but it has occurred despite the lack of any hawkish potential. If there is a currency to give the US Dollar a run for its money in losing traction on monetary policy basis, it could very well be the Canadian Dollar. Though the 'second most hawkish central bank' isn't running the pace and commitment of the Fed, its drive is more recent, speculative and far from priced in. 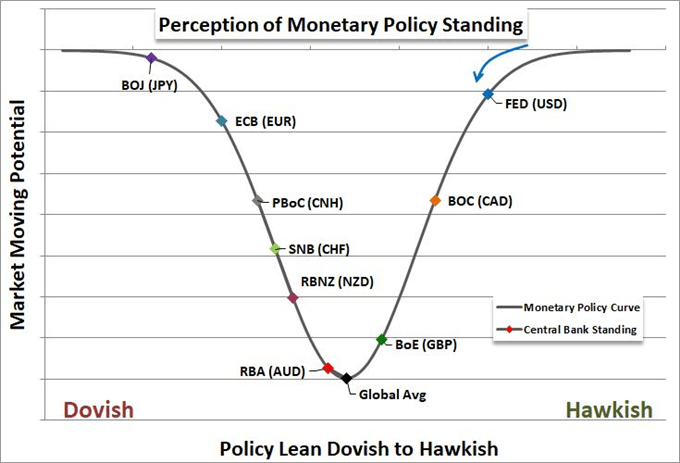 A Freeze on Monetary Policy Is Not Encouraging for Risk Trends

In utilizing monetary policy, we can evaluate the relative strength or weakness of one currency against another. It requires some appreciation in how markets price such a fundamental theme, but it nevertheless stands as one of the most comprehensive factors in financial markets. That said, there is arguably an even more important evaluation of monetary policy in the markets. Sentiment over the past decade has continued higher despite a litany of issues gnawing at the concept of genuine value. There are a few reasons for this charge, but one of the most important foundations for this reckless speculative appetite is the support offered by the world's largest central banks. Rate cuts (to near zero for many) and the adoption of unorthodox stimulus programs presented investors with the sense of security to take on greater risk in the open market, thus fulfilling the 'central bank put' thesis. It could even be argued that the collective effort forced investors to take on greater risk as the low rate of 'income' meant the only way to match - much less beat - the market was to take on greater thematic and leveraged risk to compensate. In years past, a delay in tightening would have translated into another jolt of speculative appetite. Yet, after three years of Fed tightening, sentiment has shifted. An effort to establish forward guidance means that the market has acclimated to a tighter US credit market and is starting to see it as a sign of confidence in the economy and the financial system. That said, a move to ease back on the throttle now looks less of a boon for a little more time at slightly lower rates and instead a glaring concern over economic activity and financial health. Unexpectedly, we seem to have flipped back to the historical standard where a slowing or cut in policy can earn speculative concern. We focus on the downshift in monetary policy, and why it may not inspire the speculative charge it had in the past few years, in today's Quick Take Video. 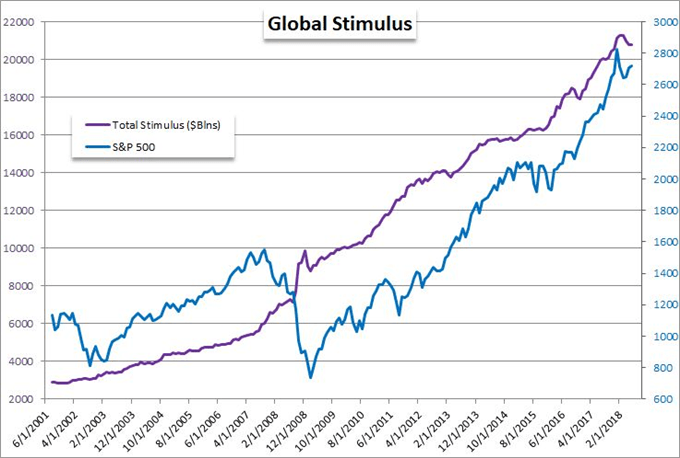