Yesterday, U.S. stocks were hammered with all major indices down over 3%, showing that despite the powerful drive higher recently that it was nothing for longs to get excited about. More wild swings expected with the general tilt of the market to remain lower. The DAX is caught between major resistance and major support, of which the latter is likely to break at some point relatively soon. Crude oil has finally found some footing, which may continue to keep it in a corrective pattern for a while as oversold conditions are worked off. Gold is struggling with a familiar area of resistance, overcome or continue to chop around.

U.S. stocks were hammered yesterday, with each of the major indices shedding over 3%. The Dow turned lower off a trend-line extending down from the record high, which now has the index looking at another test of trend support.

Coming up again is the February 2016 trend-line and a trend-line from this most recent February. These lines in proximity with recent lows along with the development of three lower peaks could see the Dow work towards a large wedge as the year winds down. This is of course only if support holds on further weakness.

This could set up for an explosive start to 2019 (likely down). But for now looking for a bit more weakness in the near-term before possibly bouncing again. 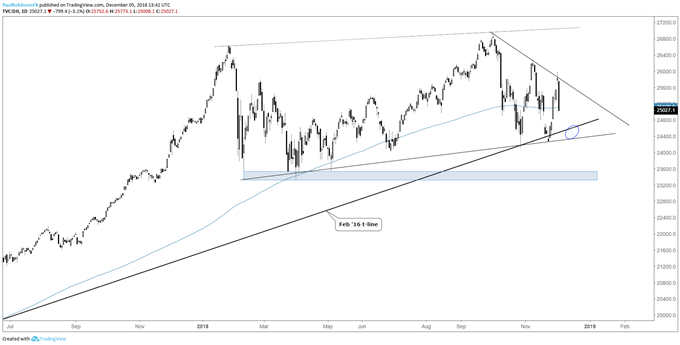 DAX 30 from big resistance to big support, the latter not likely to last

Europe remains quite weak and it is likely to only get worse in the weeks and months ahead. The DAX turned down again from the neckline of the large head-and-shoulders pattern I’ve discussed weekly in recent months, which now has the 2011 trend-line back in focus.

Today, the index is trading near it and if U.S. markets continue to fold in the days ahead it may be enough to push the DAX below what I view to be the last major line of support before the long-term topping pattern exerts its full bearish potential. A weekly close below 11k would do the trick.

The initial leg of the plunge off the 2008 trend-line may be complete for now, and with the price of oil so deeply oversold recently a corrective period may be in store. These periods can be tough to trade, but if on the short-term charts we see a series of higher lows and higher highs develop the nimble trader can trade the recovery bounce. However, the expectation is for another leg towards 42 to take shape once oversold conditions are fully worked off.

Crude oil Daily Chart (May work off oversold for a bit)

Gold is back up against strong resistance in the upper 1230s, lower 1240s (1243 the high). If this isn’t quickly overcome, look for gold to trade back down into the recent choppy price action and perhaps to the lower parallel of the developing bear-flag off the August low. If resistance can be overcome, however, then the 200-day near 1257 and upper part of the bear-flag may soon be met.

For our intermediate-term fundamental and technical take, see the Q4 Gold Forecast.