Did Fed Chairman Powell Save the Stock Market?

Want to watch analysis of events as they happen, develop your trading strategy or ask analysts trading questions? See what live events are scheduled for the coming week on the DailyFX Webinar Calendar.

A Distinct Rally on a Particular Event

There is a lot of talk surrounding a so-called 'central bank put'. As the theory goes, the world's largest monetary policy groups stand in wait, ready to charge the markets by utilizing their tools in an effort to reinforce investor sentiment rather than stoically execute their ward for stated mandates - either for steady inflation and/or full employment. This is not an official strategy, but there is enough evidence in recent central bank history to suggest it is an unofficial 'third mandate'. Was that trigger pulled this past session? There is little doubt that speculative appetite was charged by the Fed Chairman this past session (see details of his speech in Peter Hank’s article). The US equity indices posted rallies that range between 2 and 3 percent - not record-breaking moves but in rarified scale compared to recent history. Comparing the performance of other risk-leaning assets, it was clearly not a just an equities move. Further, comparison of global equities across sessions shows that the lift was only in the US afternoon hours. Checking what would inspire a speculative run this past session, there was plenty of high-level updates; but only one listing could reasonably be construed as bullish for risk trends: Fed Chairman Jerome Powell's remarks on monetary policy bearings.

For those that haven't followed monetary policy in the developed world over the last decade - in other words 'if you were living under a rock' - the change in tack from Powell this past session was inconsequential. Except, in the context of global policy and the Fed's own utilization of its tools, what we witnessed was substantial. Clearly, the Chair didn't change rates or the stimulus program - nor did he outright give guidance in a timing/tempo change for either. However, he made clear in 'Fedspeak' that the intention is throttle back on the pace of rate hikes moving forward. How do we get that from his remarks? Consider, the Fed has made forward guidance (whereby they attempt to signal their intent for the future so as to acclimate the markets before they actually execute) with exceptionally nuanced control over the effort on a meeting-to-meeting basis. Given that the Fed is the only major central bank tightening at a regular pace and is doing so at a remarkably 'fast' pace (global conditions considered), it makes sense that there is a considerable emphasis on trying to deflate the panic response to policy changes from the financial system. Key from Powell's remarks was his belief that they were 'near the neutral rate'. It could be argued that that does not preclude the pace that the markets have based much of their speculative enthusiasm on following this past September's official forecast for four hikes in 2018 and three more in 2019. The perceived neutral rate range is 2.50 to 3.50 percent, and we are currently at 2.00 to 2.25 percent. On that scale, we could still see four or five more rate hikes in accordance with the previous forecast to hit the upper bound on that range. However, we have to come back to the fact that the Fed is making a concerted effort in its forward guidance. If they are taking this navigation seriously, the remarks were tailored on purpose. In context with some other officials' notably softer rhetoric - like Vice Chair Clarida's earlier this week - there is intent at play. 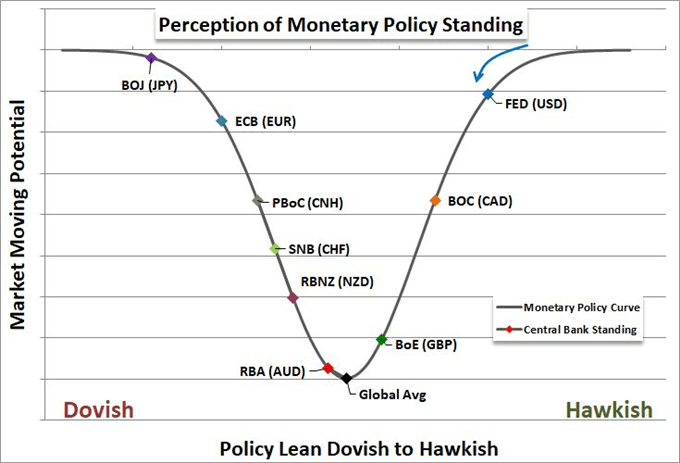 No, These Remarks Will Not Offset What Ails the Markets

As abrupt as the Dollar's stumble and US stock market rally was following the absorption of Powell's remarks, the long-term potential from this course adjustment is dim. There is little doubt that extreme (accommodative) monetary policy has driven asset values higher over the years. And, the equation connecting central bank efforts to market performance used to be rather straightforward. Any move to ease policy would be construed as more time for speculative appetite to reach a little further for yield in riskier corners of the market without imminent fear of financial collapse. When the ascent in stimulus started to level out, the markets then began to afford lift to mere delay of normalizing. If we operating through that same template, the remarks would certainly qualify for lift. Yet, if we were consider it more carefully, this is materially different than previous adjustments as we are referencing a slightly slower pace of tightening - but tightening nonetheless. Furthermore, the context of monetary policy as a motivation has significantly changed. Extreme easing is now seen as a sign of desperation to jump start inflation and growth to little avail. Banks like the ECB and BOJ are seen as impotent groups whose policies are rendering little further support, yet they can't back out of a lackluster policy without potentially detonating fragile confidence. In stark contrast, the Fed's 'gradual' pace of rate hikes has come alongside market gains leading to an assessment that withdrawing from emergency policy is a sign of a robust economy and financial system. Having to downshift on that effort in turn adopts a negative connotation. What's more, in the unmooring of monetary policy as a key catalyst for perceived value, we are led to pay more attention to other systemic threats floating around the global financial system. Trade wars, geopolitical troubles, Brexit, downgraded growth forecasts and more take on greater weight for which a slight easing of rate hikes doesn't really measure up. If we expect equities and other risk assets to turn this recent bounce into a genuine trend, we will need to see much more than just a break pump by the Fed Chairman moving forward. We discuss the medium-term risk implications of the past session's top headline in today's Quick Take video. 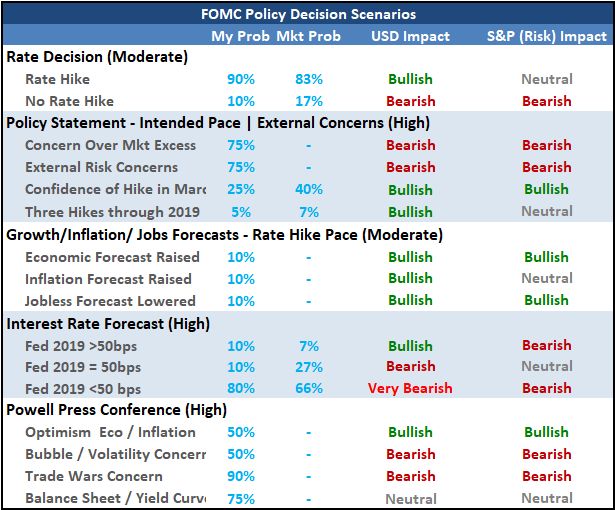