The Euro turned off big resistance last week, we’ll need a little more time before drawing conclusions about the current price sequence as a couple of scenarios are on the table. USD/JPY is wedging itself towards a break soon (the thinking is lower). USD/ZAR is testing a firm area of support, a break would likely open up the door for downside momentum to kick in. Gold is holding steady below resistance, a break on through the other side could be coming…

EUR/USD traded up against a stiff area of resistance last week with several inflection points arriving just under 11450. Looking at the 4-hr chart, the sequence since October 26 could either be taking on an inverse head-and-shoulders pattern, or a corrective wedge formation. Trend and resistance favor the latter but we can’t rule out the former after the powerful bounce off support Thursday.

The inverse H&S scenario, however, may not turn out to offer much upside with the 11500-area looming not far beyond confirmation. The corrective bounce scenario would quickly have the 11300 level in play again, a big one, which if broken could lead to a quick burst lower. In any event, the Euro looks poised to make a move very soon. 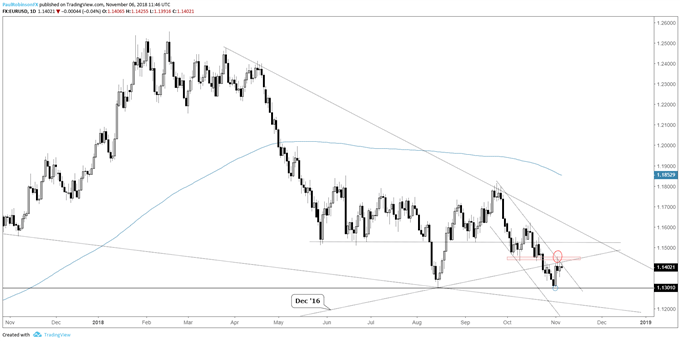 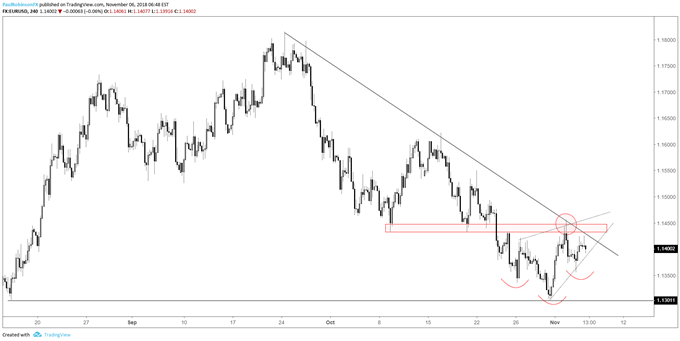 USD/JPY wedging up, readying for a move?

Price action in USD/JPY has been becoming increasingly confined the past couple of weeks, and with it a rising wedge is taking shape. After the strong sell-off early last month from resistance this could be a correction readying USD/JPY for another thrust lower. Waiting for a pickup in momentum, first, will be the key… 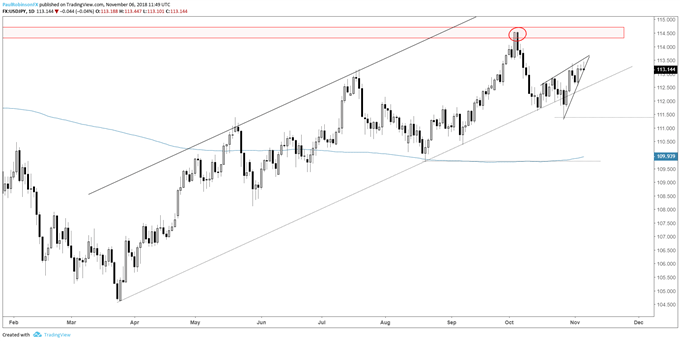 USD/ZAR testing big support, could be nearing a break

USD/ZAR has been on my radar for about a month now. It first had head-and-shoulders potential, but since then that has morphed into a wedge, a pattern which is becoming increasingly defined. The March trend-line was broken yesterday, but there is strong support down to around 13.95 to keep USD/ZAR afloat. A breakout higher could eventually develop, but if support is broken, then while not a clear head-and-shoulders anymore the outcome of the wedge break would still nevertheless be the same. 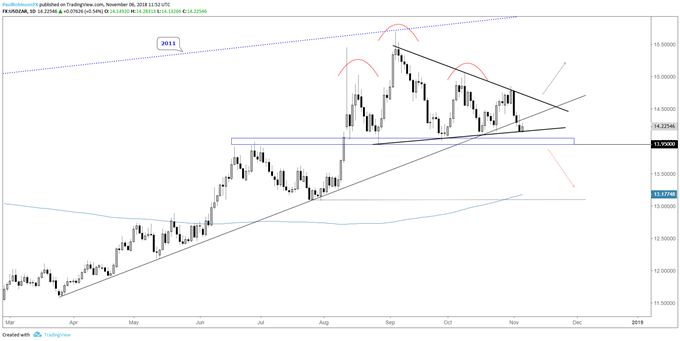 Gold is pressing up against resistance right now after its surge of support last week. This so far suggests sellers aren’t being too aggressive despite it a key area. This will likely be dependent on how the Dollar resolves itself near-term, but right now gold is looking like it may want to trade on through towards the upper parallel off the April low, and maybe even better. 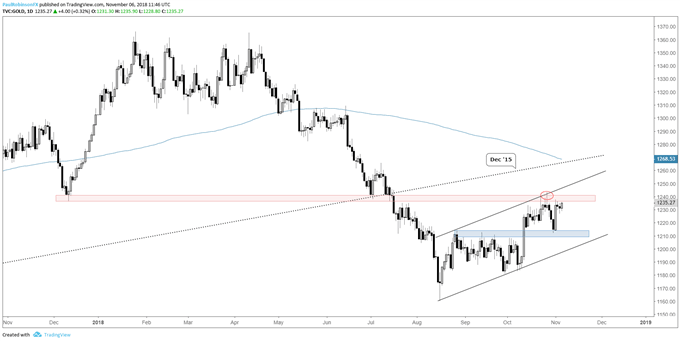