An Australian Dollar Spoiling for a Rally with the Right Spark

With the AUDUSD consolidating at the extreme of a multi-month bear trend, see how retail FX traders are positioning - for a break for continuation or a break leading into reversal. See net positioning on the AUDUSD, AUDJPY, other FX majors, Indices and commodities in the DailyFX Sentiment measures.

Why the Australian Dollar is Considered a 'Major'

To understand the motivations for the Australian Dollar - particularly when it is seemingly deviating from its expected fundamental norms - we need to appreciate its raison d'etre. Compared to the other 'majors', the Australian Dollar is not backed by one of the largest economies in the world nor is it a crucial financial system for capital as is traverses the globe. Instead, this currency is one of the most heavily used reserves and means of transition owing to its top sovereign credit rating and the favorable yield it has offered through various economic cycles. It is in other words a currency prized for its return or what I label it, 'the high dividend stock of the currency world'. That can be a favorable role to maintain, but it requires certain criteria to facilitate its demand including an underlying risk appetite and favorable trajectory on interest rate expectations from the Reserve Bank of Australia (RBA). Neither factor has leveraged support for the currency over recent months, and that is exactly what is remarkable about its bearings. Despite the abundance of fundamental weight working against the AUD's gains, the currency has held fast in its past month-long range. 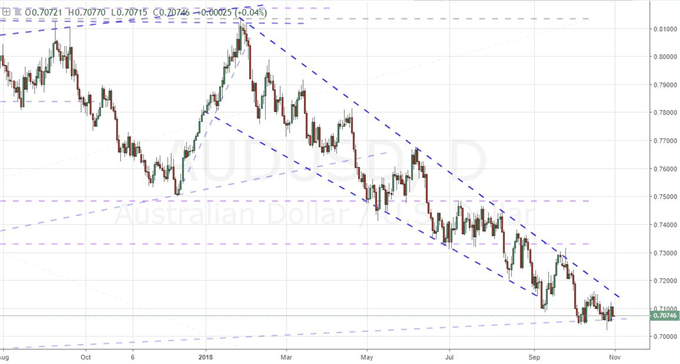 Throwing the Proverbial Kitchen Sink at the Currency

When we consider the developments behind the Aussie Dollar's fundamental backdrop as of late, it is nothing short of shocking that the currency hasn't readily toppled. The backdrop for rate expectations have long been stymied by a listless RBA, but the circumstances have only grown more clouded as of late. This past session, the statistics bureau reported its 3Q consumer price index (CPI) update with notable downshift in both the headline (1.9 percent) and core (1.8 percent) inflation figures. This deflates any lingering hope that the start of a tightening cycle may be just around the bend - similar to the anticipation following the Euro around. Even if there were any sign of rate hopes, there still needs to be an environment where yield is something to front run or absorb blindly (regardless of risk). That said, October has been a case study in speculative retreat. While not a full-tilt scramble for liquidity, there is certainly little appetite for a thin yield advantage in the broader market. Then there is the fundamental tether the Australian Dollar holds with China. The slide in the Yuan has continued with the 7.0000 line in the sand for USDCNH dangerously close. The US President's warning that all Chinese imports could be taxed were complemented by the October Chinese PMIs sliding this past session. Despite all of this, the Australian Dollar has not progressed lower and AUDUSD has kept above 0.7050. 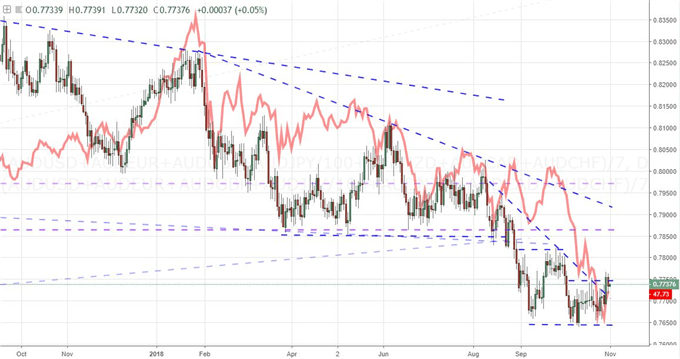 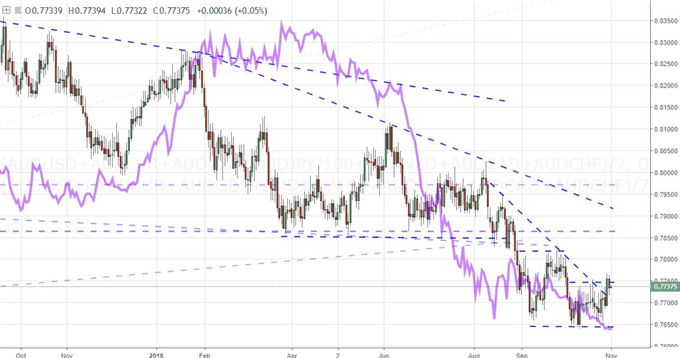 If a market does not slide in the face of unabashedly weak news, it can mean one of two things. It is possible that it may simply be fully disconnected from all traditional fundamental influence. That is not particularly uncommon in the financial system these past months, but I don't think that is necessarily the case for the Australian Dollar. It has been rather responsive to fundamental themes up until the past few months. Alternatively, the restraint in response to negative fundamental winds, may signal an underlying bias shift whereby further shortcomings won't promote progress. That an mean, however, that an improvement in the headlines or backdrop conditions can prompt a bullish response from the AUD. It is not clear when and how that motivation will come, but the potential may be seeded for such an eventuality. In the event that we do see a bullish Charge, There are certain crosses I think that warrant a plan just in case the opportunity presents itself. AUDUSD is appealing in technical terms with an overt descending trend channel with clear technical points. That said, it is my skepticism over the Dollar's climb that is truly appealing for this pair's course. I made a dedicated video for EURAUD's backdrop. A recent technical support slip is a first stage for what could turn into a significant course correction, but the Euro here would offer the real amplitude as it deals with the existential crisis that could follow Italy. AUDJPY and AUDCHF would require a factor for risk trends, but AUDCAD is unique for its ability to negate much of that sentiment quotient. We focus in on the Australian Dollar in today's Quick Take video. 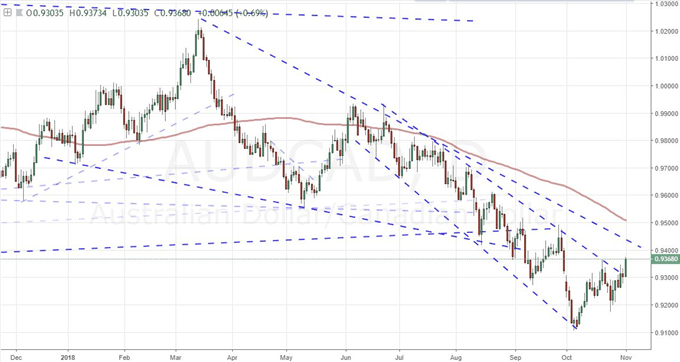