Friday’s Low in SP 500, Dow, and NASDAQ Important to Trend

SP 500 reversed near the 78.6% retracement level on Friday keeping the bulls gasping for air. A breakdown below Friday’s low could be the early warning signal that the high of large proportions is in place for US Equities.

The video above is a recording of a US Opening Bell webinar from October 29, 2018. We focused on the Elliott Wave and patterns for key markets such as SP 500, Dow Jones, NASDAQ, EURUSD, USDJPY, Gold, and Oil.

The April 2, 2018 low in SP 500 is important to the 9 year up trend. First, we can count the minimum Elliott Waves in place from the 2009 low. A bullish impulse wave and within wave (5) we can count 5 waves. If the 2,550 level in SP 500 chart breaks, then the probabilities shift that, the uptrend is over opening the door for significant losses.

Added confirmation of a significant takes place if SP 500 breaks below the 2-4 support trend line. This line currently crosses near 2,500. A break of this line opens the door for more losses down to the wave (4) low near 1800.

If the bullish pattern takes hold, it will need to emerge fairly immediately so we may find out shortly if a long and important top is in place. 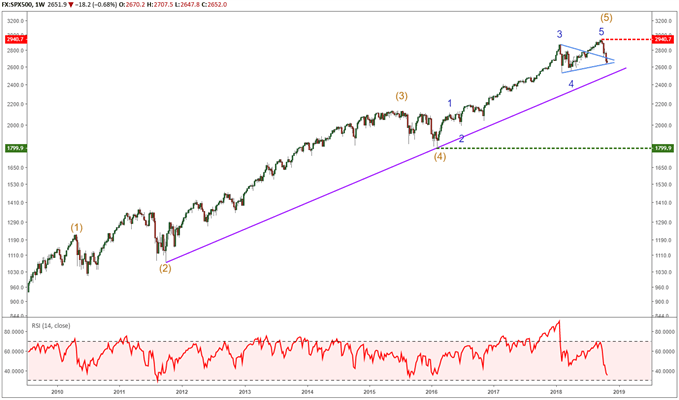 Dow Jones Industrial Average pressures its congestion lows. Though not as advanced as SP 500, if Dow breaks through 23,500 it elevates the probability the long term high is in place. If the long term high were in place, then a correction back towards 15,450 would be considered normal in Elliott Wave terms.

A rally that begins from nearby levels that breaks to new highs would indicate the current low was just wave ‘ii’ of 5. 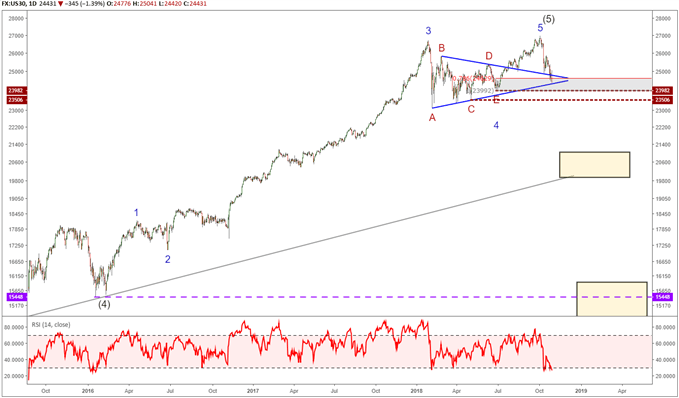 The price action in NASDAQ 100 is similar to SP 500 and Dow. The correction is not as advanced as SP 500, yet if the levels break, could be a significant bear market.

If NASDAQ does break below and holds beneath 6720, then we have an early warning signal that a long-term top is in place. A break of the grey (2)-(4) channel line near 6200 adds confirmation the top is in place. Markets don’t move in straight lines, but the trend is established as the market tips its hands on the next few points. 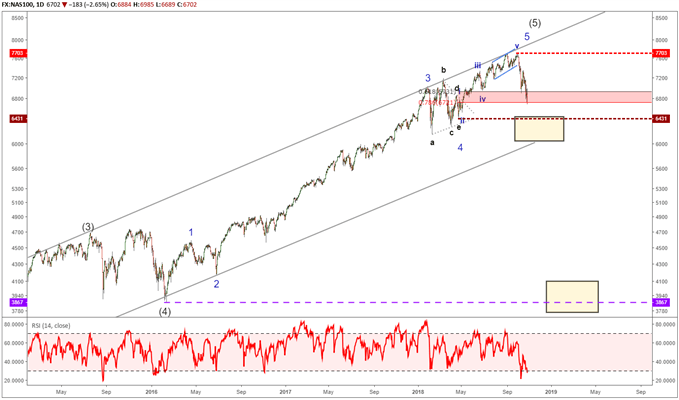