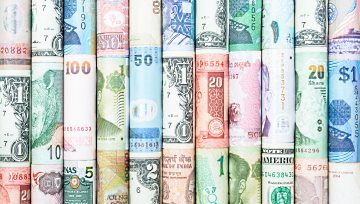 US Dollar Price Action Setups Ahead of the Fed

We are now a little over three trading days away from the end of what’s become a volatile Q3, and we still have a number of items on the economic calendar to contend with. In the immediate path in front of us, we have a Federal Reserve rate decision on the docket for tomorrow afternoon. It’s been long expected that we’ll see a 25 basis point hike here, and it would probably be a far bigger disappointment at this point if it didn’t happen. The bigger question around the Fed is whether the bank feels ready for fourth 2018 hike in December, and how hawkish they may be as we move into 2019. The US Dollar, for its part, has remained very weak since mid-August, and it looks as though the Greenback is going to close Q3 with a loss. The quarter open level of 94.63 remains a viable area to look to for resistance potential while keeping the longer-term backdrop tilted-lower.

US Dollar Holds the Lows While Resistance Remains from Prior Support

Last week’s descending triangle breakdown in the US Dollar leaves the currency in a beleaguered state as we approach tomorrow’s FOMC rate decision. A hike at tomorrow’s meeting has been long expected, and it’s likely well baked into current price action at this point. The big driver around tomorrow will likely be a bit more subjective in nature, taken from how aggressive the Fed anticipates addressing rates in 2019, and how confident the bank feels with the continued recovery in the United States. In the US Dollar, the trend remains bearish but the complication is one of chart position, as we remain very near both recent support and resistance. The optimal path forward appears to be with a bearish bias, looking for resistance at one of the prior areas of support as we move into the close of Q3. Resistance could be sought up to the 94.63 area, which helped to mark the Q3 and July open. This would allow for stops above last week’s swing high while looking for bearish continuation setups.

We’ve been following a big area of resistance in EUR/USD, taken from the chart area running from 1.1709 up to 1.1750. This area helped to hold the highs in the pair from mid-July into last week; and we were looking at this as a decision point. Now that prices have traded above, we’ve started to shift to a bullish bias, and we looked at bullish strategy in the pair as part of this week’s FX Setups of the Week. That bullish setup filled-in fairly quickly, and near-term resistance appears to be holding from around the prior July swing high.

Last Friday produced a sizable pullback in GBP/USD and many GBP pairs as a bit of negativity on the Brexit-front began to filter into current prices. This is likely to continue as we still have no clarity or resolution on what might actually happen with Brexit discussions, and this will likely continue to impact GBP price action for the foreseeable future. Nonetheless, techs have held up through the past few days of rampant volatility, with the support zone we looked for last week helping to hold the lows from that Friday sell-off, and those lows held into this week’s price action and bulls have been on the steady return ever since.

While this is unlikely to be a smooth ride, there is a bullish bias here, and that’s something that can remain workable as we trade into Q4, particularly if we see a larger breakdown in the US Dollar.

While USD/JPY spent a large portion in a messy state, matters have cleaned up quite a bit so far in September, and a smooth trend has developed in USD/JPY. This is remarkable if we think of how weak the US Dollar has been during this same period. Nonetheless, that Yen weakness may still be better sought out elsewhere with a currency that is undergoing a general trend of strength, such as we’ve been following in EUR/JPY.

USD/JPY Two-Hour Price Chart: Bullish March up to a Test of Q3 Highs

It’s been a volatile Q3 for EUR/JPY. It was in mid-August that we saw a second support hit for the year at the confluent 125.00 level, and soon after prices were back to the 130.00 handle. We looked into bullish setups last week, looking to use that prior resistance around 130.00 to base into fresh longs, and that’s held so far as bulls remain in-control. We looked into the pair again for this week, attempting to replicate last week’s use of prior resistance as fresh support in strategies of bullish continuation.

We’ve been following USD/CHF for themes of USD-weakness in September, plotting resistance off of .9750 earlier in the month, followed by lower-high resistance at .9684-.9716 last week. For this week, we looked for that resistance to hold around .9330-.9360. The topside of that resistance was tested this morning, but a bearish trend-line has helped to hold the highs, at least for now.