Gold price propelled higher following a higher-low, looking for another possible dip-trip opportunity, with one eye on the US dollar providing a bullish backdrop on a break of support. The Dow is resolving a chart pattern we looked at last week to the upside; a gap-fill and record highs from January are targeted. The Nasdaq 100 broke out of a triangle formation, with the top of a broad rising wedge within sight. The DAX is generally supported by good risk appetite, has trend-line resistance ahead.

Gold continues to have a generally bullish construct coming out of an oversold situation. The first target in this rally sequence was met at 1210, but with further strength the next targeted zone arrives in the 1230s (price and trend-line resistance). Keep an eye on the US Dollar Index (DXY) as it is on the verge of continuing the reversal it began recently. (Discussed in a bit more detail this morning’s precious metals piece.) 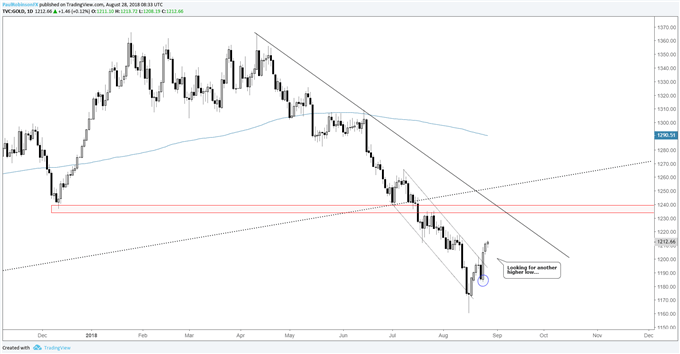 The Dow broke free from the ‘RST’ pattern. The formation was neutral the last time we looked at it, but with the breakout above last week’s high early in yesterday’s session the market confirmed a bullish break. Next up in terms of resistance is the big gap from January at 26439 and the record high at 26616. A break back inside the ‘RST’ is considered invalidation. 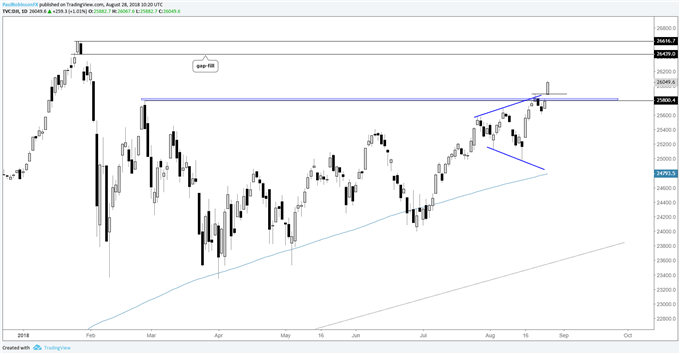 On Friday, the Nasdaq 100 edged out of a symmetrical triangle, and as of yesterday it’s trading in record territory again. In sight now is the top of a large rising wedge under construction since the early-part of the year. Heading into the fall it suggests we could be in for a major spill, but that won’t come into play until the under-side trend-line is broken. For now, the top-side t-line could be a problem, but don’t be surprised if we see an overthrow.

DAX not in great technical position, being helped by risk sentiment

The DAX is a bit of a tough handle given the generally negative looking chart in a relatively bullish risk environment (specifically in the U.S.). There is a trend-line running lower which may soon prove problematic, but not viewed as highly significant just yet. Since June price action is taking the shape of a descending wedge, but not quite yet developed. A fairly aggressive move lower off the top-side trend-line will help bring the pattern further into focus.