Gold price is on the oversold side of the ledger, but below a key long-term threshold making the outlook mixed at the moment, but favoring a recovery. WTI crude oil is on the verge of testing the July ’17 slope, viewed as a very important threshold. The FTSE is trying to breakout out of an ascending wedge, while in the U.S. the S&P 500 is trying to hold onto support and further its summer rally.

Recently we released new quarterly forecasts; to see our fundamental and technical insights on major markets and currencies, check out the DailyFX Q3 Forecasts.

Gold price is oversold, but below big support

The recent decline in gold price has it in an oversold state and due for a bounce, but working against it is the fact it is below the December 2015 trend-line. This makes it a bit of a tricky spot, however; tactically speaking, there are traders who might find this type of oversold situation of interest for playing a recovery bounce. (For more on why gold is oversold.)

A higher-low may be underway now with last week’s low looking poised to hold for now. This could lead towards the 1237 level up to a retest of the broken 2015 trend-line. It’s an uphill battle, but a correction is anticipated either via a bounce or at the least through time; that is, a move sideways which digests the recent swoon.

The recent decline in WTI crude isn’t finding much sponsorship for a rally, with yesterday’s reversal lower as a very recent demonstration of oil’s difficulties in finding a lift. This has us looking for lower prices. Special interest lies at the July 2017 slope about $2.5 lower. It’s in confluence with a trend-line from August, but the slope by itself is where our attention lies. It has been in play as support since last year and most recently in June. Bullish price action around this slope will keep oil in play from the long-side, while a break could be an important trend-turning event.

Brent crude broke the June 2017 trend-line on July 16, shifting focus lower. Yesterday brought with it a reversal bar at broken trend support and the notion we will see another move lower in the days ahead in line with WTI.

FTSE trying to break out, S&P 500 summer rally to continue

The FTSE is on the verge of trying to break free from an ascending wedge dating back a little over a month. A strong breakout above 7716 will have price pushing higher, while a failure to hold today’s rally and close back inside the pattern will at the least keep the pattern under construction, and still the possibility it resolves lower. The thinking is that the footsie will soon confirm a bullish breakout as global equities look poised to continue higher in the near-term.

The S&P 500 is sitting just above peaks in March and June, and given the overall bullish tone to price action as long as the index stays above 2789 another leg higher is seen as the likely outcome. The gap from 2833 up to 2853 is seen as the target on continued strength, followed closely by the record high. A drop back below 2789 will likely see selling until at least the trend-line off the May low. 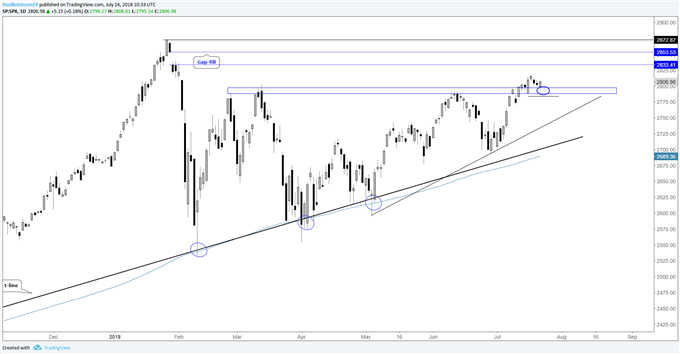