US Dollar Grasps for Air as EURUSD Finalizes Triangle Wave

Using Elliott Wave Theory our analysis for US Dollar Index and EURUSD hints at one last pop of USD strength. Then, we will consider a multi-month US Dollar correction to begin.

The video above is a recording of a US Opening Bell webinar from July 23, 2018. We focused on the Elliott Wave pattern for EURUSD among other US Dollar pairs. According to Elliott Wave Theory, US Dollar may be near a multi-month top.

The Elliott Wave chart for US Dollar Index suggests we may see a mild new high but the Dollar advance is quite mature. It appears we are in a 5th wave of a larger wave ‘A’. This 5th wave appears to be carving out an ending diagonal pattern. Therefore, we have clues the market is providing us that this wave is a terminal wave where US Dollar may take a gasp of one more breath of air. This market is susceptible to a swift retracement. 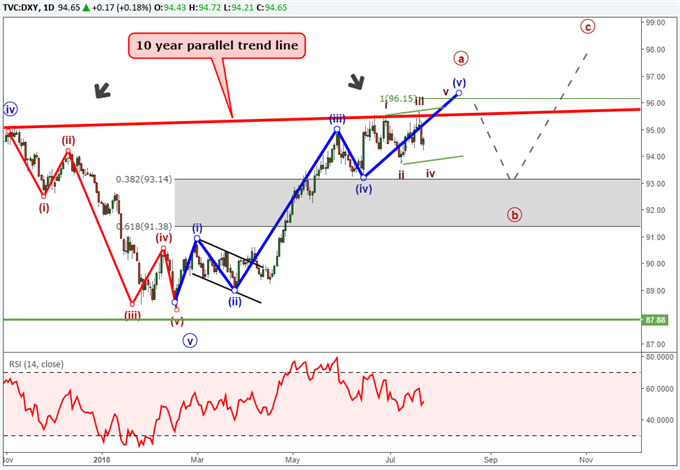 For those forex traders keeping score at home, the Elliott Wave diagonal pattern began June 14 and is nearly complete. So long as US Dollar Index holds below 96.15, then the market is at risk of a reversal to 93.19 and possibly lower levels. 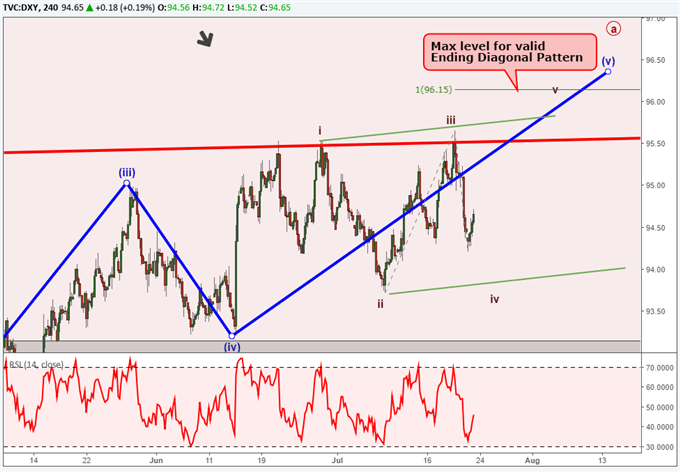 The EURUSD price chart continues to gyrate sideways in an Elliott Wave triangle pattern. We can count the pattern complete at today’s high so we are on high alert for a break lower out of the triangle.

The Elliott Wave triangle pattern is a symmetrical triangle and wave ‘e’ of the triangle has met the a-c trend line. We are counting this triangle as wave (iv) of a bearish impulse wave. Using wave relationships, we are anticipating a continued sell off to below 1.1510 that may reach 1.1350 and possibly 1.1100.

We have been short EURUSD with our first short entry at 1.2350 and our 2nd short entry at 1.2153 as prices hit our first target of 1.1554 on May 29. The Elliott Wave patterns still point towards lower levels so we hold we hold these short positions as wave (v) unfolds. 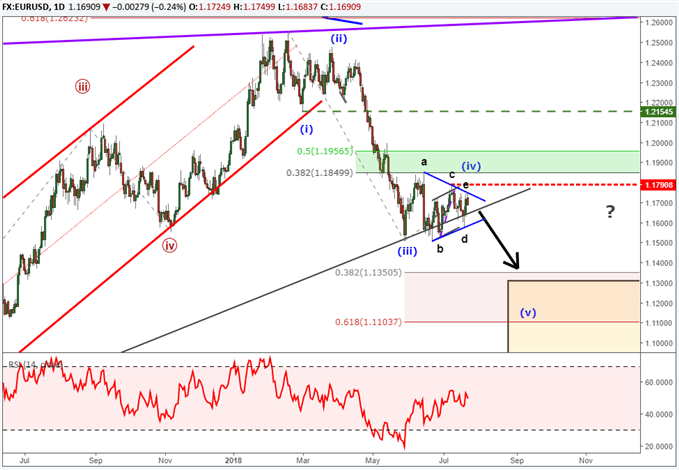 What is an Elliott Wave ending diagonal pattern?

According to Elliott Wave Theory, there are several patterns to watch for. The diagonal pattern is a motive wave and carves in five waves. Each of the five waves are zigzags. Most of the time diagonals form in the 5th wave of an impulse of the ‘C’ wave of a zigzag or flat pattern. However, diagonals can form in the 1st wave or A position too.

We talk more about the construction and how to trade Elliott Wave diagonals in this hour-long recording.

How do I begin analyzing using Elliott Wave?

Learn more with “What is a Triangle Pattern in Elliott Wave Theory and How do you Trade it?”