US Dollar Weakens But Not Enough to Complete the Wave

The video above is a recording of a US Opening Bell webinar from July 9, 2018. We focused on the Elliott Wave pattern for EURUSD among other US Dollar pairs. According to Elliott Wave Theory, US Dollar may experience a correction in the next few days.

From an Elliott Wave perspective this move lower likely corresponds as a ‘b’ wave. Therefore, we are considering it to be temporary weakness in the US Dollar prior to support emerging towards a new high above 96. 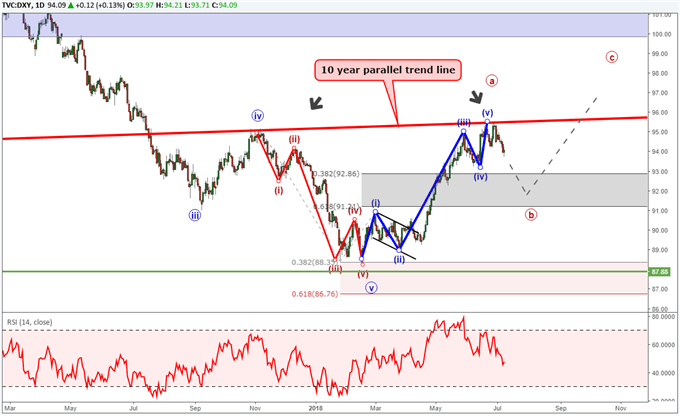 The EURUSD price chart continues to carve higher lows and lower highs over the past week. This essentially paints a consolidation picture for traders. Trends and consolidations of those trends do not last forever.

Last week we wrote how the pattern hints of a bump higher towards the 1.17-1.18 handle. That bump higher has taken place. However, based on the US Dollar Index chart above, the USD appears to have more weakening on its horizon. Therefore, even though prices have reached our potential reversal zone, we will not be interested in adding to the current short position yet awaiting even higher levels to print.

This forecast is valid so long as EURUSD price remains above 1.1528, the June 28 low. Though unexpected, if EURUSD drops below 1.1528, then we consider the near term bullish pattern negated and the potential for further losses to below 1.14.

We have been short EURUSD with our first short entry at 1.2350 and our 2nd short entry at 1.2153 as prices hit our first target of 1.1554 on May 29. The Elliott Wave patterns still point towards lower levels over the medium term though several short-term patterns hint at a bump higher to possibly 1.18. 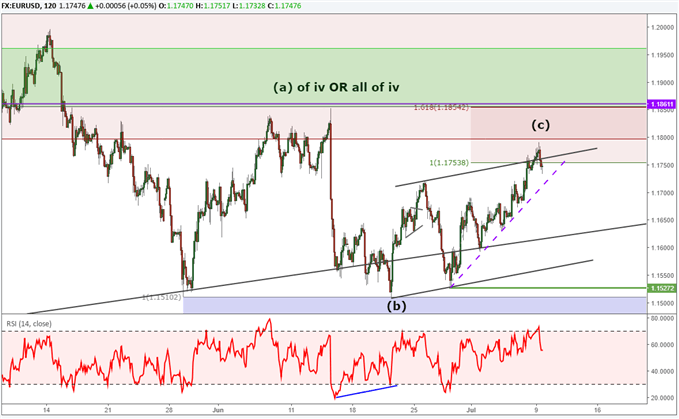 It appears we have a bearish impulse wave from the June 20 high to the June 28 low. Therefore, we are anticipating a three wave move to terminate near current levels while holding below 7335. This would be an Elliott Wave 5-3 pattern and therefore is bearish.

Nasdaq has exceeded the 78.6% retracement level, so the warning lights on the dashboard are flashing that this bear pattern may not work out. A break above 7335 would void the bearish pattern and indicate some other Elliott Wave pattern is at play. 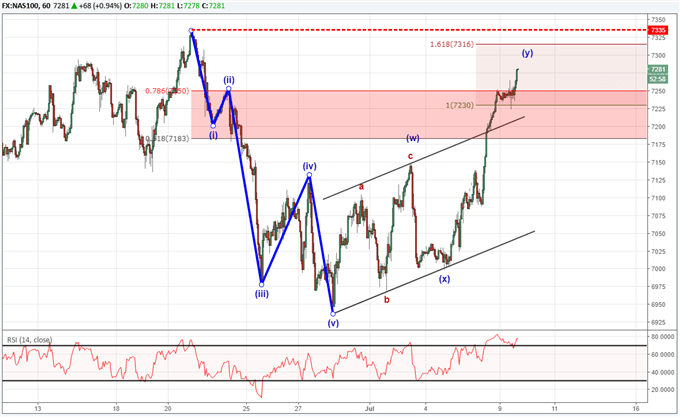